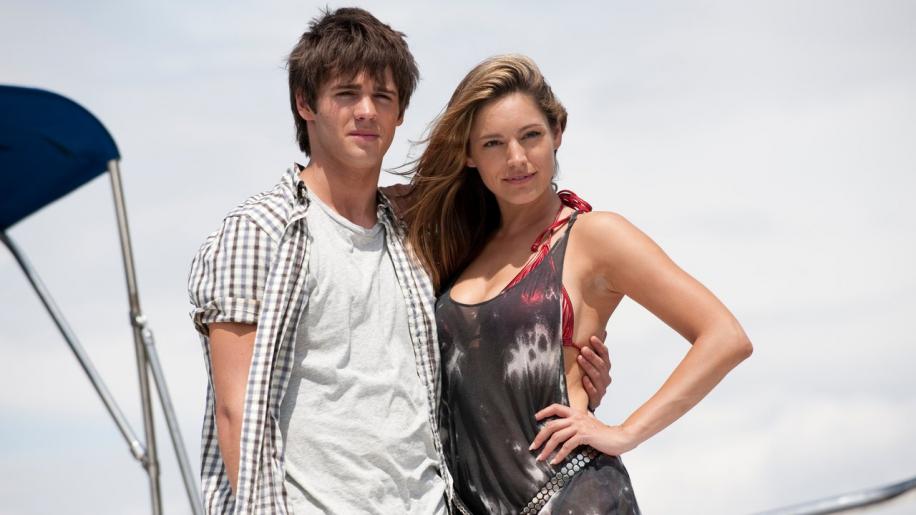 So, it’s a few years ago and I’m watching a little known French film titled Haute Tension (2003) marvelling at its tight claustrophobic atmosphere, blood and savagery with a twist to die for and thinking that it takes a European to tell Hollywood how to make a horror film. Its director, Alexandre Aja, went on the record stating he was trying to invoke the sense of the 70’s and 80’s horror films. I’m not entirely sure he succeeded, Switchblade Romance, as it has since been retitled, stands out for sheer inventiveness from anything from those times. Sticking with his love, though, Aja’s next project was a re-shoot of Craven’s own 70’s shocker The Hills Have Eyes (2006), this time for Hollywood, and brought with it a new sense of horror, not redefining, but a remembering of how to shoot terror and adding to it gallons of the red stuff. Having missed Mirrors (2008) that bring us up to date with tonight’s feature, yet another remake of a 70’s shocker, Piranha. Has Aja managed to, once again, brings something new to the old? Let’s dive in and find out.

An earthquake releases a school of pre-historic piranha during Spring Break and they proceed to feed through anything that happens to be in the water, which, during this time of the year, is the collage students. And that, in one sentence, is the entire plot of the film! No government body altering piranha, no chase to try and save those down stream, no, Aja fillets the script to just eighty eight minutes of pure carnage, with boobs, and on that level it succeeds.

Capitalising on his love of 70’s and 80’s horror, Aja found in script writers Pete Goldfinger and Josh Stolberg, kindred spirits and a desire to “bring back boobs and fun in horror”; staple ingredients of the exploitation film. Indeed by adding so much of both into the mix there is one important facet left out. The horror. But we’ll look at that a little later. The exploitation film has always been aimed at the teenager, specifically the male and this is the exact market that Piranha 3D has been let loose on. The inspired choice to set the film during Spring Break is telling enough, it gives the filmmakers unlimited scope to fill the frames with young bodies, both female and male and showcase any opportunity to see them near naked, and in some cases, totally naked. Spring Break is an orgy of flesh and Aja so skilfully blends real footage with his own shot for the film footage that it is impossible to tell them apart. The commentary tells of the many extras who were so into the shoot that they just parted and stripped without direction. The fact that there was also a bunch of real porn stars hired must have helped though! These scenes pretty much directed themselves, a case of light the blue touch paper and film.

Aja, though, does have a great deal of skill behind the camera when it comes to tension, this is best seen in the opening sequence which I wish to take a look at here, so be warned, there be spoilers ahead. The opening shots bear little resemblance to the underwater menace that the film is about – he tries to create a ambience of unease, desolation; the frame focuses on a keep out sign and barren rocks before moving across the water to a lone boat with a lone fisherman inside. The fisherman is Matt Boyd being played, in a wonderful cameo, by Richard Dreyfuss, who is singing “show me the way to go home” in what is the first of many Jaws (1975) references. An underwater earthquake rocks the water, creating a whirlpool that threatens to engulf the little boat and poor Matt is tipped overboard only to become fish food for the escaping pre-historic piranha. The scene ends with another 70’s shock, a blooded hand breaking the water's surface from either Deliverance (1972) or Carrie (1976). Aja plays out a terrific little set up that neatly explains the basic premise of the film, he utilises the underwater shot so skilfully set up by Spielberg, to great effect, fully capitalising on the terror of something you cannot see below you. Watch him also mimic Spielberg’s pull back and focus shot later when Sheriff Julie Forester (Elisabeth Shue) gets the call from her son and knows the trouble he is in being trapped in a sinking boat, as well as the many underwater POV shots with people swimming oblivious to the danger beneath the surface. Aja’s love for this genre is written clearly on his sleeve, so much so that he rarely strays from the path and, actually, doesn’t deliver anything new in the directing stakes that we haven’t seen before. This is a real shame as he never manages to up the tension, despite some incredible set pieces.

He did, however, cast extremely well, aside from the brilliant cameo from Dreyfuss, we have, in another inspired cameo, Christopher Lloyd as the pet emporium owner who has the job to exposit all the information about the ancient species of piranha – channelling Dr. Emmett Brown, he gives a terrific performance and is the one who brings the awful truth at the end of the film. As to the rest of the cast, Elisabeth Shue as Sheriff Julie Forester, the poor woman tasked with keeping order amongst the hordes of kids on Spring Break – her introduction sees her no tolerance approach to those that step out of line. She is, however, the only authority figure, aside from her deputies, that we deal with. No town mayor who wants to keep the water open here, no it is the Spring Break kids themselves that refuse to listen – much as they always do! Shue pulls off the caring mum and the overworked sheriff without breaking a sweat. She is backed up by Ving Rhames playing Deputy Fallon, who doesn't quite pull off the older wiser cop, but is clearly at home wielding an outboard motor as a weapon against killer fish – would have been nice to have seen him do more in this respect. Our main focus is Steven R. McQueen and Jessica Szohr who play Jake Forester and Kelly respectively; two young wanna be lovers, who just never seem to be able to click, except when killer fish are nibbling at their toes that is. They share a brief but likable chemistry. Special mention to our own Kelly Brook, playing the stripper Danni, in a role that requires a little more than just taking her clothes off, although I’d have been happy if that was all her role was …. The rest of the cast list is a near who's who, with names like Eli Roth, Dina Meyer and Jerry O'Connell whose portrayal of the predatory director of the fictitious ‘Wild wild girls’ website is probably the most creepy thing in the entire film – and what a comeuppance he has! – to name but a few.

And to mention the gore factor, to put is bluntly, it’s been turned up to eleven. The biggest scene involves the Spring Break crowd being systematically eaten by the piranhas, involving some five hundred extras all with bits missing, a sea of red and mutilated bodies, there is simply nowhere on the screen that doesn’t have blood or a body part. It is truly astonishing the amount of gore on show and yes it is all gratuitous. As is the nudity that is liberally spread throughout he film, be it the wet T-shirt competition, flashers, or nude swimming any and all excuses are used to get naked flesh on show. It is truly gratifying to see a film totally unashamed to the excess of blood, gore and naked bodies. Aja wanted to create an exploitation film, he has nearly done it. Because to be truly great it has to maintain that horror, that sick meld of blood, flesh and terror, and sadly he doesn’t quite pull that off. The fish are never that truly terrifying, the set pieces are never that tense or horrifying, in part due to the rapid pace with which we meet the characters before they are killed off, in part due to the rush to include as much blood and boobs as possible. Nearly all characterisation is gone, and with it the tension for their survival.

Still, it is one hell of a ride. It knows its market and goes after it unashamedly, plot holes and contrivances be dammed. Piranha is not going to attract a big following, but those that know what they are in for will lap it up, I’m sure. A bold experiment and one that is, thankfully, not the last, watch out for Piranha 3DD coming soon!