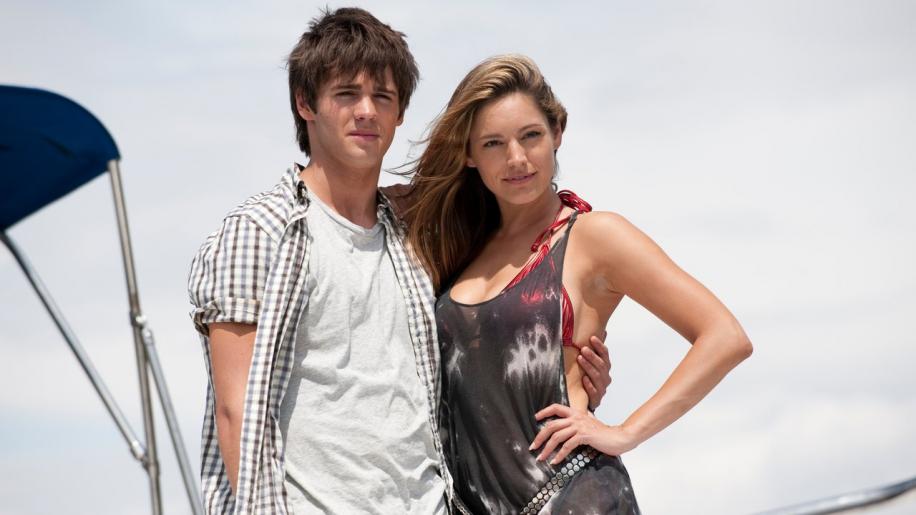 You can’t have missed the marketing campaign. The buses of my local city have been plastered for months with a rather interesting image. A rather fine, if airbrushed, rear end, female, bikini clad, with a gigantic fanged fish in close proximity heading straight for the right cheek. It is a neat advertising trick. It immediately grabs the attention and simultaneously tells the viewer exactly what to expect from this film. Monstrous fish, and sex. That is what is on offer here, and boy that is exactly what you get. What is shocking, however, is just how much sex and violence you get – especially the former. Yes, this is aiming squarely for the late night boozy lad’s market – and I thoroughly enjoyed every minute of it.

But before all this we get to meet a very familiar character. Remember Matt Hooper (Richard Dreyfuss) from Jaws? The young oceanologist who nearly became shark food, but managed to stage a miraculous escape? Well, he’s now a sozzled alcoholic fisherman out on the lake in his boat. As he is fishing, a large earthquake on the lake bed opens a fissure to a lake under the main one. Down here, ancient prehistoric piranhas have been breeding and keeping alive by feeding on each other. The earthquake has released them from their prison and they are very angry. Its chow down time, and poor old Hooper is going to have to face another aquatic menace…….

The use of such an iconic character from another famous aquatic creature feature is both a very brave move and a sign of the confidence the filmmakers have in their product. They know they are remaking a hoary old B movie, but their goal is to do so with rather more intelligence and wit than was found in the original. It takes some confidence to make a piece of disposable trash like this, yet begin the film with an homage to one of the seminal works in the genre. As a filmic device, it is a piece of genius – and one of the only examples I can think of where a famous film character turns up in such a way.

But this is only a small scene in the film, and things quickly move on apace. Once a mutilated body is found, it doesn’t take Forester long to realise that she needs to close the lake. But the Spring Break crowd are having none of it. Luckily for her, Jake is at home looking after the kids so they won’t be in any danger from the fishy fiends. There’s no way, through a strange coincidence that he and the hot girl he loves but can’t bring himself to tell, would end up on the same boat where the porn film is being made with the two pre-teens left unsupervised. And even if that DID happen, there is no way the pre-teens would contrive to get themselves stuck out on the middle of the lake, on their own, and surrounded by piscine predators.

Yes, every disaster / horror movie cliché is alive and well and present in this film. We even have a mad professor (Christopher Lloyd) who is the expert who indentifies the prehistoric nature of the enemy. Yet, it is this knowing archness than does much to provide the film with the underlying irony that makes the film such a success. This is not just an empty headed film, full of bimbos, which is intent on wreaking as much destruction as possible on the fit young bodies that are there as gore-fodder. To be honest, if the film hadn’t have been directed by Alexander Aja I probably wouldn’t have bothered to even go and see it. But I know he is an auteur with stunning skill (see Haute Tension for example) who is unlikely to deliver an empty film. Whereas there are certain film snobs who are likely to be disappointed that Aja is “lowering” himself to make films like this, I am not one of those. Indeed, it is his talent and cinematic awareness that raised the film above its exploitation origins. I have already mentioned the nod to Jaws but there are plenty of others here. Alligator is also referenced as well as many others. A film geek can have almost as much fun spotting these as he can spotting the boobs.

Ah yes, that brings me on to another topic. Boobs. There are plenty of close-ups of bikini clad boobs and bums. Taught, firm, and often silicone based. These will certainly keep the club 18-30 demographic happy. But I should also mention that there is an extended, slow motion, almost balletic, Sapphic love scene filmed underwater featuring Kelly Brook and friend. Now, there may not actually be any sex here, but there is certainly more than just boobs on show and if you go with a female companion she may not exactly appreciate this scene. Surprisingly for a film of this nature there is little violence. Apart from one key nine minute scene where the savage shoal rip into the co-eds the film is surprisingly restrained. But when the fish do eventually chow down there are some satisfyingly brutal moments. Without spoiling things too much, there is one particularly nasty scene involving a boat propeller. It is definite that this film does deserve the 18 rating, but the violence does tend to be rather more of the slapstick Final Destination gore than more realistic violence as seen in straight forward horror movies. In fact, I would suggest that the 18 rating is possibly more for the sex than the violence. Apart from the aforementioned boat scene I didn’t find any of the violence here particularly upsetting or strong.

Normally by now I would have spent some time mentioning the quality of acting on display. That I haven’t done so does not mean that the acting is poor (quite the opposite), just that no-one here is particularly stretched. What I will mention is Jerry O’Connell as the odious Derrick Jones. His is a wonderfully over the top performance that really acts as the core of the film. There always has to be a man you love to hate in a film like this, and Jones is that in this film. That he gets his comeuppance in poetic fashion is just the icing on the cake. Alongside him, the ensemble cast put in solid, dependable performances. Rhames and Shue are excellent as the enforcement teams, and Brook plays dippy porn star of little brain perfectly. I am sure there is absolutely no element of typecasting in this at all. Steve R McQueen as Jake manages to put in a likeable performance, meaning that you are always rooting for him.

The film as a whole, though quite simply delivers on its promise. The pacing is fantastic, with Aja knowing not to deliver everything the audience is clamouring for straight away. He builds up the tension by showing snippets of Piranha attacks, and the bloody aftermath, before eventually cutting loose and letting us see everything in gory detail. He knows exactly when to give characters time to breathe, and when to gleefully dispatch them. He references other films frequently, and moves his camera in interesting ways. One particularly tense scene involving an escape across a rope is beautifully set up and executed – almost Spilebergian in the way it is shot. In fact I would go so far as to say that remove the exploitative sex and the movie would still stand up.

But Piranha is that rare beast in 2010. In a conservative cinema age, where it seems that cinema has lost its capacity to shock – where political correctness has truly infiltrated studios and the 18 certificate is something to be sacrificed at the altar of bottom-line grosses, Piranha 3D gleefully rips up the rulebook and gives audiences exactly what they crave. Gratuitous nudity, gleeful one-liners, bloody gore, over-the top acting performances, and cienematic nous. A sequel has already been green lit, but if you have any interest in the genre whatsoever you need to see the original. If for nothing else, then the penis gag. You will never look at a fish in the same way again.

But should you see this in 3D or 2D? Well, in this day and age there are two 3D techniques. The films that are shot natively in the format, and those that are converted in post production. I am a big fan of 3D and what it can bring to the cinema, but increasingly I am finding that it is starting to be used more as a marketing trick than enhancing the film. Toy Story 3 3D was poor, and Clash of the Titans was even worse. The very title Piranha 3D suggests that Piranha is native 3D but in fact it isn’t. It was shot in 2D and upconverted. The result is very disappointing. I cannot think of one scene where anything actually popped out of the screen at you. The sense of depth as engendered so well in Coraline and Avatar is completely absent. Whereas I am a supporter of the technology, in this case I cannot recommend the 3D version of this film. If it is the only one available for you to watch, then fine – but if you get a choice I would recommend 2D. But whatever you choose, I would recommend you go dip your toes in Aja’s Piranha infested waters. You will have a blast!

Piranha 3D does exactly what it says on the tin. In this day and age, it is rare for a film to embrace the 18 certificate so enthusiastically - and Ajas's gore and sex fest certainly does this. But there is slightly more to this update than meets the eye. Aja is too good a filmmaker to merely offer schlock, and his pacing of the film as well as the cinematography and editing does slightly raise the film to higher levels. The constant referencing of other genre entries is also very entertaining

But the bottom line is that the film is about prehistoric piranha's feasting on sexy young bodies - and this is certainly an entertaining way to spend an evening at the cinema. I can do nothing but wholeheartedly recommend this film - although a shoddy 3D upconvert means that I would recommend the 2D version if you have a choice