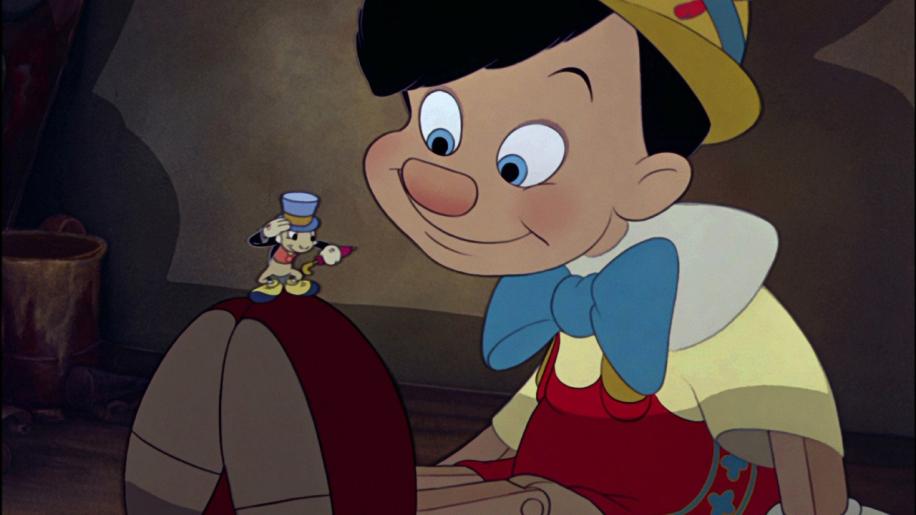 The first Disney film I ever saw was 'Snow White and the Seven Dwarfs' not upon its original release, I hasten to add, but in the early 1960s and since then I've had a great love of the work produced by those masters of animation. I always felt that if an animation wasn't produced by Disney, it just wasn't good enough (like a bar of chocolate not made by Cadbury's), so it was a great joy to have the opportunity to review the 70th Anniversary Blu-ray release of 'Pinocchio', Disney's second feature length animation. Over the years I've seen 'Pinocchio' on various media including Super 8 and 16mm film, VHS, laserdisc, DVD and now in it's latest high definition incarnation on Blu-ray. To casual viewers, this is a 'kid's film' but you wouldn't have thought so if you'd ever been to a film collectors convention and seen the 'feeding frenzy' whenever a print of the film came up for sale.

Just to dispel a possible misconception held by the 'yoof' of today, 'Pinocchio' was released in February 1940 (that's right, during the Second World War) when widescreen had not been heard of, so it's in the 'Full frame' or 1.33:1 ratio - and that's how it's presented on Blu-ray, in its original format with vertical black bars either side of the image on a widescreen display. There's nothing wrong with this, so take your 'hoodie' off and learn to love it! There were many good films made before 'Star Wars' that were not presented in widescreen.

For those who don't know the story, just settle down now - and no fidgeting.

The film opens with Jiminy Cricket singing one of Disney's iconic songs "When You Wish Upon A Star" over the main titles. The singing voice was provided by Cliff Edwards or Ukelele Ike as he was known at the time. Jiminy tells the tale of how Geppetto (a woodcarver) makes a little wooden puppet, called Pinocchio, and wishes (upon a star) that he was a real boy. As the Blue Fairy arrives to grant his wish, Jiminy Cricket exclaims, “As I live and breathe, a fairy! Mmm - mmm!”
Now, there's no way that this could have caused the same hilarity in 1940 as it does today due to current innuendo, but it just goes to show that modern connotations should not be forced upon dialogue from a more innocent age.
Pinocchio lives, but must prove himself worthy before becoming a real boy and Jiminy agrees to act as his conscience figure before launching into song with the ever popular "Give a Little Whistle".

On his way to school, Pinocchio is side tracked by the foxy Honest John who sings “Hi-didely-day, an actor's life is gay...” (nuff said), and his dim-witted sidekick, Gideon the cat, who sell him to the puppet master Stromboli - whose travelling show is currently in town. Pinocchio becomes an overnight success, dancing alongside marionettes in the "I've Got No Strings" musical number.
Later, locked in Stromboli's bird cage, Pinocchio whistles (remember?) for Jiminy Cricket who, unfortunately, is unable to unlock it. The Blue Fairy re-appears but, not wanting to reveal how he got there, Pinocchio lies and his nose grows like a brush handle. After releasing him, the Blue Fairy warns that he'll never become a true human if he tells porkies, “A boy who won't be good, might just as well be made of wood.” She really knew how to put the wind up poor Pinocchio.
Turning his back on the life of an actor (“I'd rather be smart than be an actor.”) and with his hooter restored to its former glory, young Pinocch bumps into Honest John and Gideon again, who have been hired by a dodgy coachman to round up boys to take to the Pleasure Island amusement park - where naughty boys literally make Jackasses of themselves and are sold into slavery. After growing long ears and a tail, Pinocchio escapes and returns home but his father isn't there.

A dove arrives with a note (as they do) telling him that Geppetto has gone to sea in search of his lost boy and been swallowed by Monstro the whale, so donkey boy Pinocchio and a reluctant Jiminy journey to the bottom of the sea to look for the lost woodcarver. They eventually find Geppetto in the belly of the whale, and effect their escape by making a fire which causes it to sneeze them out to sea. Pinocchio saves Geppetto from drowning and further harassment from Monstro, but in the process is left seemingly dead. Pinocchio's sacrifice has proved to the Blue Fairy what a good person he is, and he is brought back to life not as a puppet but as a real boy. Not a dry eye in the house!

The story in itself isn't what really makes the film work. It's the great charm with which the animators tell the tale. Animators are really just frustrated actors who can draw. If anyone has ever watched one working, they'll see them pulling faces into a mirror, acting out scenes and timing their duration, so they can multiply it by 24 to give them the number of film frames they need to create. They need to be able to act themselves in order to make the character they're drawing give a good performance.
In 'Pinocchio' there's warm humour, fear (but not too scary) and great songs that many modern artists have attempted to cover but none have quite achieved the same sentimental feeling as the originals.
Above all, there's the 'Disney magic' that is the result of an exhaustive process of development and revision until a result was produced that pleased 'Uncle Walt'.

In this day and age of 'Transformers' and superhero movies, you might be forgiven for wondering if a film that was made 70 years ago has what it takes to capture and hold the attention of the children of today. It may have no 'pooping' gags, but what it does have is bright colour, movement, memorable songs and charisma - plus a story told by people who knew how to tell a story well - and one that's firmly in touch with human emotion.

This is a movie for children of all ages - and we're all still children at heart!