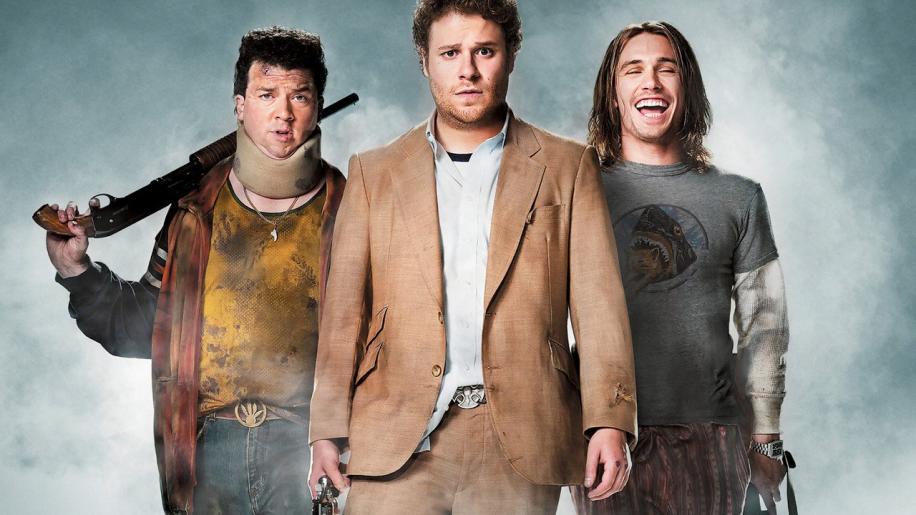 Having recently reviewed another Sony comedy release “Step Brothers”, I was only too pleased to be given the task of running my eye over this high farce. One can easily see why the aforementioned Will Ferrell absurdity was given the green light, but this is an all too different beast. Family is perhaps the oldest and most oft used gateway into the realms of comedic situations and thus is the backbone of many a jocular film. However, the “stoner movie”, as “Pineapple Express” draws much of its inspiration from, cannot be seen to be in the same ballpark of accessibility for the viewer. Even at the height of Cheech and Chong, whereby they gained a modicum of mainstream recognition, they were still a niche market and hardly headliner material.

That isn't to say that the average pothead character hasn't been assimilated into the public consciousness, for there is a whole generation that will forever revere Sean Penn for his performance as Jeff Spicoli in “Fast Times at Ridgemont High” (1982). The problem lies though with the question as to whether such antics can be stretched to form the entire narrative of a story that lasts two hours. When put in such context, and with many simply labelling this film as in such a category, the outlook may appear bleak for “Pineapple Express”. Rest easy, as to pigeonhole it as such would be foolish. It comes from a fine stable of writers, actors and director - all of whom are perfectly aware of the limitations of overplaying one joke to the point of tedium.

So what of the team? Well, for starters, the writing combination of Seth Rogen and Evan Goldberg produces a script that is every bit as sharp as their previous creation “Superbad” (2007). That it also stars Rogen himself, previously seen in “Knocked Up” and “Superbad” last year and Kevin Smith's “Zack and Miri Make a Porno” this year, only helps to allow a fine performance of a character the script staff are intimately knowledgeable about, in this case the affable process server Dale Denton. Don't be under the impression though that because the man wrote and acted in this feature it's a one man show. Denton is almost second fiddle, even though he is pushing the plot forward, to the brilliant creation that is Saul Silverman, played here in a wonderful comic turn by James Franco (perhaps best known for his role as Harry Osborn in the recent Spiderman trilogy). In fact, Franco's prefect buffoonery and comedic skills are made all the more impressive when one considers that the character of Saul was originally written by Rogen for himself - purportedly only ceding the part when realising how good Franco would be at making it his own. What could have been the atypical, forever high two dimensional figure is adeptly given a tender and very caring side that arguably makes a far easier connection to the audience than era films of this genre. This, by the way, has to have one subtle but very significant amendment to it. You see, this isn't merely within the dopey (pun intended) realms of 70s “stoner movie” fare that draw out one long cannabis based joke that is created around the happy pothead image. Instead here we have a drugs based “buddy movie”.

For those unaware of the premise, our two central protagonists - Dale the straight man with a job and Saul his dealer - are caught up in a drugs war between rival factions when Dale unwittingly witnesses a murder and leads the perpetrators back to himself and Saul, thus they must go on the run (but not before packing weed, roll-ups and snacks). If anything, the drugs based angle only really motivates the main thrust of the movie, that being the budding relationship between our unlikely duo and eventually how they come to view their lives. This may sound earnest, but this is all handled in a very light hearted manner and doesn't ever truly descend from its throne of wackiness and stupidity. It may surprise many that directing all this on screen hilarity is David Gordon Green, a man known more for his heartfelt and thought provoking dramas. At times it seems a little absurd that the man who brought us 2007s “Snow Angels” is orchestrating a man diving face first into a cat litter tray. However, the beautiful thing about his direction is the fact that much of it is simply capturing the actor's performances in such a way as to highlight them without overemphasizing aspects that would make the film lie closer to cartoon material. Many of the moments are filmed as if they were deeply earnest and handled with great delicacy. The sight of Saul sat on a swing crying into his burger whilst a chubby little girl in glasses watches from behind a link fence is actually poetic in its stylings and serves to show how well Gordon can bring a human element to what can be farcical imbeciles. It seems as if the correct combination of playing things straight, and simply letting the script and the characters give enough comedy, has proven to be the correct balance between laughs and realism. Let us not forget that this is, after all, a buddy movie at heart.

Thus onto the action that inevitably follows any great on screen pairing. Think of these two hapless chaps as a stoned Murtaugh and Riggs, Butch and Sundance, Crocket and Tubbs, though truth be told, their tough guy credentials are closer to Rosie and Jim. Once again, the film benefits from the director playing things straight, so to speak. It's not that elements of slapstick aren't apparent, as one such brawl contains a nipple twist, but rather that the majority of the violence actually looks like it hurts. Usually comedies play down the physical repercussions of such fights, with characters seemingly living in a cartoon world where an object smashed over the head merely dazes. Here the consequences are far more real and at times visceral. This not only helps to create a genuine sense of drama to scenes and therefore makes the central character's burgeoning friendship that much more key. It also emphasizes the absurd interludes such as a character yelling “time out”, then yelling “time in” when his opponents aren't ready, followed by him running away like a child repeating the mantra “I'm sorry, I'm sorry, I'm sorry”.

That the direction is so fitting is entirely down to the earnest way in which it complements the on screen proceedings without ever lapsing into the formula of actually directing a comedy. The action scenes are treated as action, the dialogue scenes are treated as such and so on. It might seem like a step out of sorts for Gordon to be helming this project but once you consider his motivation for entering the industry originally - “I got into this business because I love huge action movies and I don't want to exclude that from the fabric of my career if I can incorporate it in some way” - it becomes evident that this was a box that needed to be ticked for the up and coming director. Indeed, some staples of his have even seeped into this feature, with his like of retro studio logos and credits being added here to perfect effect. Alongside Dales vintage car (and the lense flair that accompanies his mellowed ride), this aids to place the film firmly in the company of its 70's brethren,

However, once again, the question to be asked above all else is “is it funny?” to which I'd have to say yes. The style and tone of the film may not work for some, preferring their dope head based antics to be closer to “Jay and Silent Bob Strike Back” (2001), another personal favourite of mine but suitably different from this, may not appreciate the subtly on offer here in places. This is very much an ensemble acting piece at heart, with various pairs of characters developing their relationships throughout the narrative. We have our heroes (and I use the word loosely and perhaps wholly incorrectly), with James Franco portraying Saul as a lovable idiot who appears on occasion to have taken voice coaching lessons from the character of Fenster (as played by Benicio Del Toro) from “The Usual Suspects” (1994). Rogen meanwhile seems at times to be enacting a live action Muppet, with the voice of Oscar, the panicked run with arms flailing of Kermit and the physical appearance of Fozzy the bear, with his suit hanging on him like a PG Tips monkey. The other key duos that balance the story are the bickering hitmen, Budolfsky and Matheson, pursuing them (“I have feelings, and you hurt every last one of them”) and the two killers whose murderous crime Dale Denton unexpectedly witnesses, Ted Jones and Carol “the lady cop”, brought to life by the always stellar Gary Cole (“The Brady Bunch Movie” - 1995) and Rosie Perez (“It Could Happen To You” - 1994). The one singular individual without a partner though is Red the middleman, a character so pleasantly ridiculous that he attempts to steal the show and simply begs for a movie to call his own - who can dislike a man who uses the phrase “bong mitzvah” and believes his prowess in a fight will hinge upon his bald armpits being aerodynamic?

Overall, there's a pleasant pacing, with a rhythm that alternates the plot scenes with the character based scenes so we are never pushed too far without a laugh or fall into the trap of forgetting the premise of the pairs plight. It is quite unlike many a modern comedy that has occurred since the Farrelly brothers first arrived upon the scene. With so many pushing towards the absurd and gross since then, it's nice to see an altogether different direction. This has violence, but without the true high camp spoof of sound effects accompanying hits. It's vulgar, but manages to generally sidestep the overuse of the F word even though it is used a reported 180 times - only when Dale meets his girlfriends parents and they spout the word willingly does it seem out of sorts with the on screen reality. In short, it's a tale of friendship, action and ultimately an appraisal of lifestyle. Everything a good buddy movie should be. That it made me laugh out loud seemed almost a bonus, and a welcome one at that.