Not quite the classic it could have been 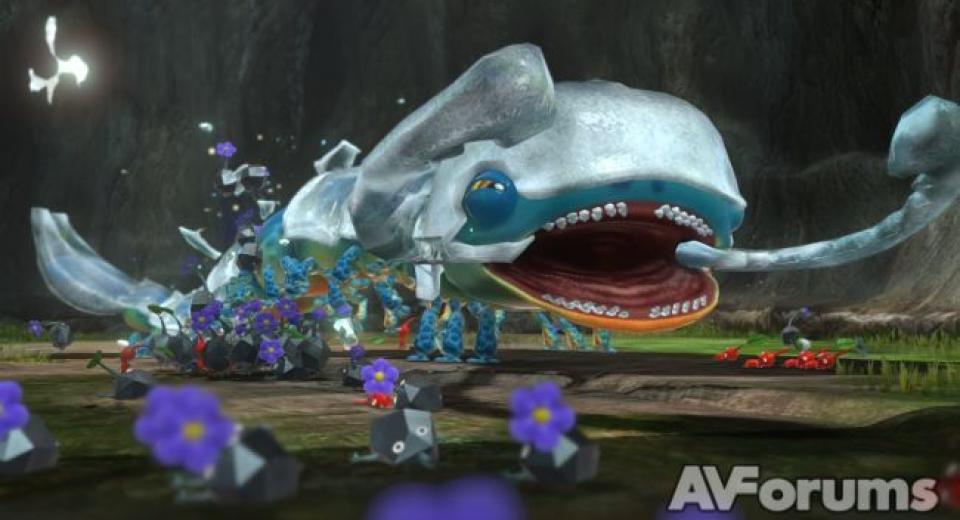 Pikmin is one of those games that has a nice appearance, is full of charm and is regarded by many as one of the all-time Nintendo classics. Having had outings previously on the Wii and Gamecube the Pikmin series is treated to a splash of HD thanks to the Wii U’s *ahem* graphical capabilities. But will a HD makeover be enough to not only revive interest in the series, but also in Nintendo’s quickly-failing console?

As with any starting sequence things quickly go sour for the protagonists, in this case the crew members of the SS Drake. An accident sees their ship crash land on a strange planet, PNF-404, which happens to be full of the friendly Pikmin creatures, as well as a host of nasties. The reason they were 404 bound in the first place? Their home planet is running critically low on food resources and this mission was pivotal in securing a food source to ensure the planet's future survival. Not only does Koppai depend on them, but now Brittany, Alph and Charlie must ensure their own survival too.

Initially, you fly solo on PNF-404 until you rescue your fellow crew members by discovering new sections of the planet. In tow of course are your trusty minions, the Pikmin. As you progress, new Pikmin become available to you which further opens up each section of the game, but all are needed in order to progress through the game and reach its conclusion.

Luckily enough, these Pikmin are happy to take orders from strangers and complete as many manual labour tasks as you can throw at them. Each one fills a specific role or duty, for instance yellow Pikmin are resistant to electricity whilst blue folks can travel in water, and rock Pikmin are tough little blighters. All can hold their own in the given situation, and the right blend of each is necessary in order to move along quickly and efficiently. So your quest is now twofold; to rescue your teammates and ensure survival, but also return back to your home planet to solve the problem of the dwindling food supplies. The title features a time-based constraint however which pushes you to complete tasks quickly but also not to waste any time unnecessarily. Each day lasts 15 minutes and at its close you must go back to your ship and return any used Pikmin, lest they meet an untimely demise if you don’t. Collected fruit fuels your activities, so a constant note of your stores must be maintained as not to run out and bring an abrupt end to the game.

So as part of the HD treatment given here, Pikmin 3 has a very nice look to it. Everything shines and shimmers whilst the play environments have just the right amount of detail. Comparatively, other games stand out more from this but for a title to look this good on a Nintendo console is quite a sight to behold. In particular, the pieces of fruit which you collect have been painstakingly recreated and are bursting with detail. Once collected, you can inspect them from your ship, and videogame fruit never looked so appetising.

The obedient minions are pretty useless when unsupervised. It’s a wonder that they have managed to survive and evolve on their own thus far without instruction. As one of the three playable characters you literally fling them around willy-nilly, telling them to do this or that, be it breaking down a wall, removing an enemy creature or retrieving precious fruit. In the latter part of the game you will be able to chop and change between playing as the three characters, meaning your strategy and tactics have to be in order to result in a productive day occurring. Only 100 Pikmin can be on screen at one time so unless you send them back to their home or they perish on the field then you can’t recruit any more of the blighters. They tend to be in abundance however, so should you lose a few of them in one go in a tough boss battle then you can quickly replenish their number, but at the expense of precious time.

At first, the task of managing so many creatures and characters at once is a little daunting, but you quickly get accustomed to it. You haven’t got much of a choice really given that you have to succeed in order to keep the continuation of the game going. It would be nicer to have a bit of a shallower learning curve in place but it seems the best way to learn here is under pressure.

Pikmin 3 can be played using either the old style Wiimote and Nunchuck or the Wii U’s GamePad which is surely the most appealing factor here. A strategy game with a touchscreen pad seems like a neat feature right? Of sorts it does, because it’s not as well implemented as you would have first thought, and doesn’t really add anything to the overall experience. Whatever you choose to play with though, you need the GamePad with you at all times as your space friends carry their own version of the tablet around with them which they use to communicate with. As such, even with the Wiimote, you have to utilise the GamePad for certain sections which may annoy some. The pad doesn’t really make for the easiest of tools for navigating 404 either, or throwing around your little critters for that matter. It feels a bit cumbersome and obtrusive which seems a bit odd to be saying as it has never been a problem with any other game before this. When it comes to scrolling around the map it really comes into its own, but the character and Pikmin controls just feel a little loose. There’s something just not right and it’s hard to pin down exactly what it is that’s not right and missing from it.

The same can be said for the entire game really. As charming and light-hearted as it is, I can’t help but feel like it’s all a bit empty. Granted it’s different, but there’s just something that’s missing from it, there’s no addictive nature to it like there is with things such as Animal Crossing which is a shame. It doesn’t help really that the game clocks in at a measly 10 hours for the campaign mode, which you can’t help but feel could have been a lot longer.

This instalment does feature a multiplayer aspect to it, competitive and co-operative for two players. You can tackle missions together or play ‘Bingo Battle’ which sees players fight to collect fruit before their opponent, aiming to get four in a row to ultimately win the game. It’s simple, light-hearted fun but again it feels somewhat of an afterthought and as though something more could have been made of the multiplayer.

So not only is Pikmin a nightmare to say for anyone with a South African accent, it also proves to be too light-hearted for its own good. It's simple fun but it's not a game that will revive the Wii U nor will it keep people on their machines for any great length of time. The change of pace and scenery is great, as are the visuals, and as it goes it's a great strategy game but there could have been so much more. The GamePad could have been used better, the campaign a bit longer and the learning curve a bit easier to tackle to promote adherence and see the game to its conclusion. As it stands, it's probably a game that will be appreciated by loyal fans and those familiar with the series already as opposed to newcomers which is a shame considering the struggle Nintendo has on its hands right now.