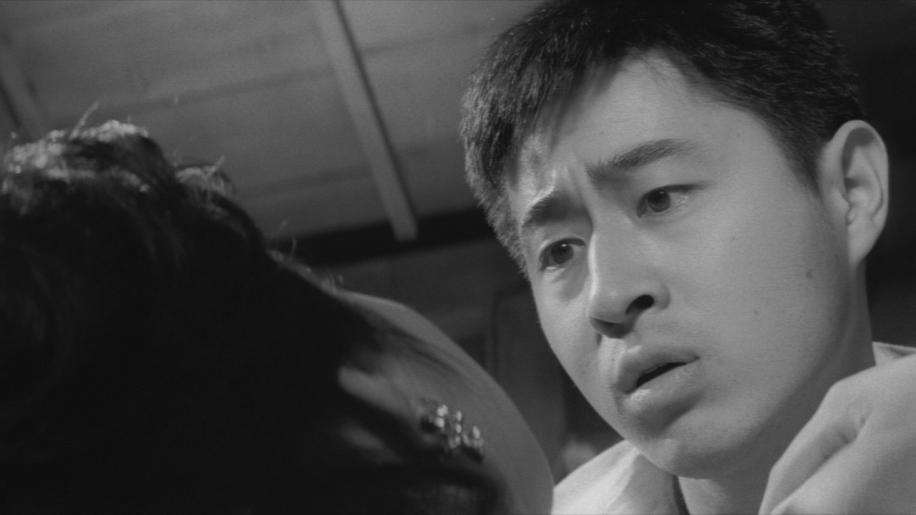 Shôhei Imamura built his career by focussing on the seamier side of reality. For him the grandiose tales of honour and chivalry that formed the backbone of jidaigeki cinema was not alluring, the present flux of Japanese society was far more rich a vein for his particular talents. His 1958 offering Pigs and Battleships (Buta to Gunkan) perfectly encompasses this shift in theme that would, for many, epitomise much of the evolution of the Japanese New Wave from the staid roots of what had come before. The movement preferred to peek behind the scenes of the lesser elements of society, peering into gambling dens and whorehouses, uncovering the secret desires of the lower classes and what drove them. Essentially telling the stories that had not yet been told and in an unflinching manner, as respectful to the baser constituents of the narrative as Kurosawa would be to an act of nobility.

Pigs and Battleships, coming from the early momentum of the New Wave, has all the stamps of the movement as a whole. Its story is a mix of underclass, proletariat struggle and commentary about the changing face of Japan’s society and place in the wider world, yet it wraps all these golden threads, each of which you could write a thesis on, within a human drama of rebellion. Kinta is a happy-go-lucky wannabe gangster, put in charge of the pig farm, he is a typical hybrid of old and new, Japanese and Americanised influence, with his baseball cap ever present but so too are the zori on his feet. As the title suggests, pigs are one of the hubs of the narrative in one way or another, and so are battleships. The setting is Yokosuka, a coastal town with little economy, but the influx of US troops when a ship docks is a windfall for all those looking to make some easy money, and Kinta is one of them.

As the camera pulls back down the night time street, the neon signs glare as the Western seamen wander in their droves, gawping at the sights on offer and being enticed into shops, bars and brothels to spend their dollars. One of the early instances of a commentary, splitting the Japanese from their visitors, is the raid on the brothel. The prostitutes are taken by the local authorities in a bitter manner whilst the sailors are loaded calmly laughing into their trucks, to be escorted back to base. The world they both inhabit may be dirty and seedy, but some are merely tourists here whilst others are residents. Kinta is desperate to get his end of year bonus from his shady employers, but he is every inch the immature dreamer. He could pay off debts or make use of it in other similarly such responsible ways but that path is not for him. His mind is a pinball of fantastical the-sky’s-the-limit delusions. He plans to buy a hand made suit, manage a band and rake in the money. The only detractors he has, both naysayers of his life of petty criminality, are his father and his girlfriend. The former, an ex-navy man who scrapes a living gathering wood from the water and selling woodchip, is despised as a failure, a drunk who somehow isn’t able to see the bold path Kinta is forging. Haruko, his girlfriend, meanwhile is the more vocal, she genuinely loves Kinta and wants him to dismiss all his easy money schemes, and along with it the less than salubrious partnerships he’s made with the local gangsters.

The talk of criminals may conjure images of latter ninkyo cinema of Suzuki and Fukasaku, but the small time hoodlums of Yokosuka are miles away from the suited hitmen or irezumi clad tanto-wielding street warriors of the aforementioned directors’ works. There is no strict, unquestionable structure to the gang Kinta is a member of, they may have deference for those supposed to be higher up in the hierarchy, all happy to cede in arguments and call “aniki”, but the Sumiyoshi-kai they are most certainly not. Once backs are turned and the going gets tough they are shown to be out for themselves first and foremost. The backstabbing is less bloodthirsty power based and more petty one-upmanship in the quest for money. The boss figure is not a grandiose oyabun in a palatial mansion, he is seen as a success for having an apartment with curtains.

The hub of the infighting and various misdeeds and misunderstandings is the pig farm and the contract that has been struck to get the scraps from the battleship to feed the livestock. Once they are of sufficient size they should guarantee the gang a sizable windfall and Kinta will get his much wanted end of year bonus. But, as ever, all does not go according to plan and for a variety of reasons they have to beg, steal and borrow the money to keep their business plan alive. In the background is Haruko, always on Kinta’s shoulder like the conscience he never fully developed. If Kinta’s father is a symbol of the old then Kinta and Haruko are the possible directions open to Japanin its future. One, being dependent on the money of others and tying its fate to the ideal of the path of least resistance, and the other a spirited will to forge its own destiny through honest work and independence. Imamura’s social commentary, both on the small and large scales of Japan at the time, is cutting and fairly damning for those portrayed without a name, the hoards of women in the conclusion who throw themselves at the sailors coming ashore, yet for the central cast the director always maintains his understanding nature, keen to furnish even the most skewed persona with an element of the humanistic. They are all players in the great drama, each with their own motivations and the thread of human failings is sewn through all of them.

Though Imamura was never keen to create too glossy a film, being a fan in many ways of the imperfections of the art and wishing audiences to focus on the characters rather than mere visual compositions, the framing and use of symbolism becomes easy to catch in various shots. The theme of the ships and water that defines this coastal community looms over scenes, be it a picture of the battleship, a small ornament, or simply just the life ring on a wall. The children as they squabble (mirroring their family’s argument) ends as a child reads aloud from a book about Japan as the camera focuses on a small cart packed with three pigs beneath a covering of rustic rope, the child reading aloud “Japan has become a modern independent state” as Kinta takes the stolen pigs to sell.

The icing on the cherry is the jet-black humour Imamura uses, as the narrative reaches its conclusion, the character of the gang’s “aniki” – a hiccupping hypochondriac – forces the plot into farcical territory. Convinced he’s dying, he attempts to throw himself under a train, only to lack the nerve and be pinned to a sign that reads “Nissan Life Insurance – Live Life with a Smile”. The spectacle of the climax is a wondrous sequence of absurdity involving the aforementioned hypochondriac, a Chinese hitman, fake money, a double-double cross, bickering gangsters and a stampede that is truly unique. Pigs and Battleships sums up the argument that Imamura, for all his predilection for the baser acts of the populace, was in fact one of the more humanistic directors due to his ability to understand, depict and create empathy without judgement. The film, like the characters and the society it is depicting, has flaws, but Imamura’s design allows for these to be not just overlooked but readily accepted as part of the tapestry of storytelling and cinema. Wry, compelling, dramatic and eccentric, it is easy to see why Pigs and Battleships helped break the New Wave onto distant shores.