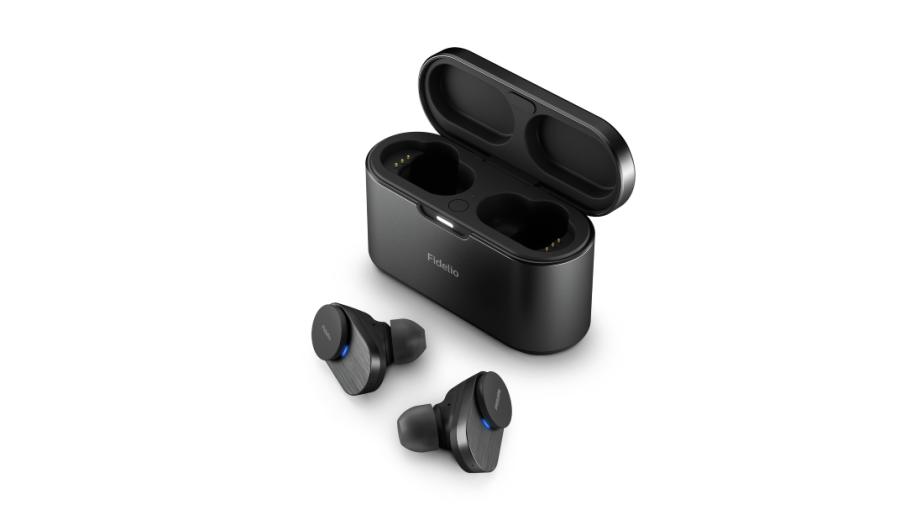 The T1 is intriguingly different to some of its key rivals but, if you have the equipment to make use of its Bluetooth fitment and you find its shape comfortable, it brings many of the charms of the Fidelio platform to a true wireless fitment.

Introduction - What Is the Fidelio T1?

The Philips Fidelio T1 is a true wireless in ear earphone and the flagship of the current range of Philips models. As the ‘rules’ of true wireless solidify, the specification becomes more and more consistent between models and - to an extent anyway - the Philips is no exception. Being Philips though the T1 is not simply ‘me too’ engineering.

Each enclosure mounts a 10mm dynamic driver but partners it with a balanced armature to handle high frequency. This is something we’ve seen in the Bowers & Wilkins PI7 but the Philips is significantly less expensive which makes this fitment rather more impressive (bear in mind, it requires more amplification to drive a pair of transducers as these designs don’t really make use of a conventional crossover). Battery life is quoted as nine hours with the noise cancelling (more of which in a bit) engaged and 25 hours in total from case recharges. My own experiences suggest this is slightly optimistic but actual performance is in keeping with key rivals.

The Bluetooth fitment is a little curious though. Built on a 5.2 platform, the Philips has SBC, AAC and LDAC but no aptX fitment of any kind. I am not sufficiently up to speed as to what the percentage of LDAC equipped Android phones is but I don’t believe it’s anything like a majority and if you don’t have it, it means that the Philips will most likely not hit the heights it is capable of. If you do have LDAC though, the T1 joins a fairly select group of buds that can use it.

The noise cancelling is similar in operation to the full size headphones and built around four microphones dynamically comparing the noise level in and outside the ear canal. It’s controlled through the same app as the headphones and this is now (after a brief hiccup when it first launched) stable, reliable and completely intuitive to use. It also has some preset EQ features but I confess that only ‘treble’ of the four is really listenable for me. The others have far too much low end to be anything approaching accurate although your mileage of course may vary.

The Philips is well made, available in a pleasing sober grey (white is also an option) and I quite like the aesthetic. I have to sound a word of caution though. In terms of how the Philips sits in the ear canal, everything is both conventional and impressively comfortable. The potential catch though is that the rear section of the housing is a long oval with an actual edge to it. For the overwhelming majority of people, this is far enough from the dome that it’ll clear the pinna perfectly well but there will be a subset of people for whom this is not the case and this will not be comfortable. The case is beautifully made but quite large. As we head in the summer months with the commensurate reduction in pockets, it might be too big for some.

If the T1 does fit in your lug, there’s a huge amount to like about how it goes about its business. The most significant area of ‘Philipsness’ to the performance is the noise cancelling and the relation of the audio performance to it. The T1 cannot quite match the truly remarkable isolating properties of the Grell TWS-1 but, in adaptive form especially, the implementation of the noise cancelling has precious little effect on the tonal balance of the material being played. Poppy Ackroyd’s Resolve retains its delicacy and realism, even when you’re sat on a busy train.

And, if you do have the means of making use of that LDAC capability, the T1 is a very strong performer. I’m of the personal opinion that the latest variants of aptX are sufficiently close to LDAC that the performance advantage it held at one point has been eroded somewhat but it still doesn’t prevent the Philips having no trouble managing the all important trick of having you forget you are listening over Bluetooth. This is helped in no small manner by the fact that the Philips has significant reserves of volume which means you can generally have the level you want rather than something that is loosely equivalent to it.

This is all tied into a device that manages to get all the basics right. Pairing is straightforward and completely stable once you have completed the process. This is given with the added rider that I was able to perform the acid test for any true wireless earphone and walk across the Euston concourse at rush hour with the T1 and it largely kept running. No Bluetooth earphone I’ve ever tested in that manner has ever made it the whole distance without a drop out but the Philips did better than most. Call quality is also more than acceptable too.

Ever since the X3 passed through for review, Philips headphones and earphones have delivered a consistently high level of performance and the T1 is no exception to the tradition. While I don’t feel it achieves the transcendently high standard of the X3, in that it faces stiffer and more consistent competition, the T1 is another very carefully considered bit of kit. Make sure that the more ambitious EQ settings are off and that the housing clears your pinna and you have a True Wireless earphone with convincing tonality, plenty of grunt, excellent noise cancelling and solid build. The end result has to be seen as Highly Recommended.