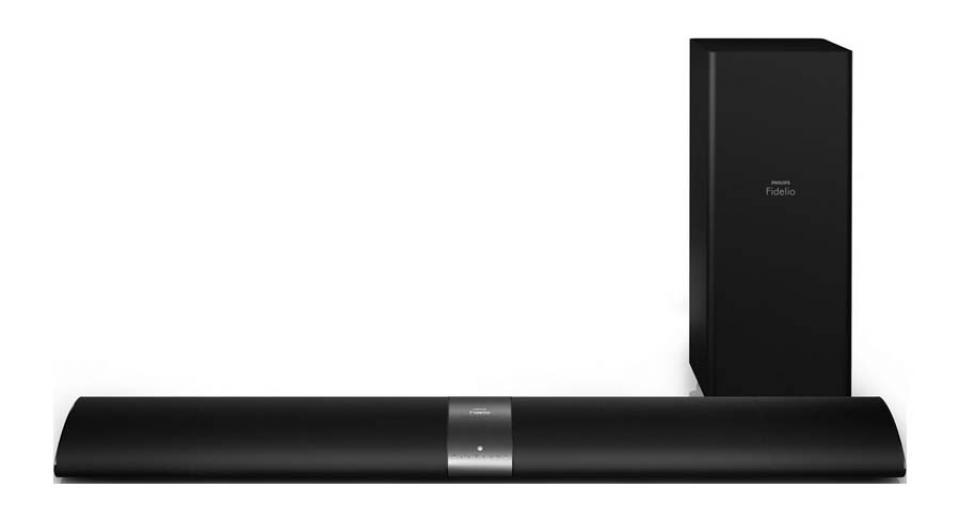 The Fidelio range represents the pinnacle of Philip’s audio engineering and is a fairly new concept for the company. In truth, it’s a reaction to the lifestyle audio market where a combination of convenience and style is required but Philips is not content just to tick those boxes and wants to add both performance and innovation to the list as well. The Fidelio HTL9100 soundbar certainly doesn’t lack on the latter point, being the first of its kind to feature detachable speakers that can be placed as rear surrounds, as and when the mood takes you. There’s also a host of other technologies and features to explore so let’s lay it down and dive right in.

Is this the best looking soundbar we’ve ever had in for review? Quite possibly although, as ever, that’s a matter of taste but we love it. The HTL9100 features what they call a low profile airfoil design, which is more or less tear drop shaped when viewed from the side. The Fidelio Soundbar is all decked out in a fine black mesh except for the middle portion which features a curved chrome indicator panel and a power button just above. In all honesty, the panel is more useful in an aesthetic sense as it’s impossible to see what the various lights are indicating from anything like a normal sitting distance. Still, it looks pretty and doesn’t really get in the way. The bar – with detachable speakers attached – measures 103.5cm across so will ideally suit TVs in the 42-50inch range and at only 7cm high, in its table-top position, should sit beneath most TVs without getting in the way of the screen or infra-red sensor.

Accompanying the main speaker bar we have a matching black subwoofer that is unusually tall and slim for a package like this. At 51cm high, it’s not exactly going to shrink in to the background of your living room but its footprint is relatively small as the sub spans 20cm, both in depth and width. We actually think it looks rather elegant but we’ll have to see whether Philip’s ‘Double Bass’ technology design is effective. The sub should come automatically paired to the main unit, out-of-the-box, but if not, pairing is simply taken care of by a small button on the back. The detachable speakers don’t feature a pairing button but we never found they lost their lock in surround formation so it should be of no concern to the end user. Wireless communications, for both, are taken care of by Philips’ proprietary SMSC 5.8GHz wireless technology which, we can say after extensive testing, is very robust.

The HTL9100 is a very well connected package with 2 HDMI inputs as well as an ‘out’ to take advantage of TVs with Audio Return Channel (ARC) compatibility, allowing the television to send audio ‘upstream’, cutting down on the number of cables behind the TV and also meaning you can use the TV’s remote to control the volume. There’s also a 3.5mm L/R stereo audio and both coaxial and optical digital audio connections to choose from. If that’s not enough, the Fidelio will happily communicate with your Bluetooth enabled PC, Smartphone or Tablet to stream your music collection or even as an accompaniment to games and other apps. With all those connections available, keeping everything neat and tidy is a concern and Philips has gone some way in addressing that by including a cable tidy clip for wire management. In practice, if you do utilise very connection, it’s going to be difficult not to have things poking out.

The Phlips HTL9100 doesn’t doesn’t feature any OSD (on-screen display), despite the HDMI out connection so it’s through a combination of the elliptically shaped remote control and indicator from where all operations must be marshalled. The remote is quite nice to handle but a touch on the slippy side and the contours aren’t ideally shaped to sit in the hand. The buttons are well planned and presented, however, with plenty of space between one another. The handset has controls for input selection, volume, bass and treble as well as standby and an activation of the virtual surround mode. We like that Philips has though to put an Audio Sync (both negative and positive) on the remote as some other manufacturers don’t and there’s nothing more annoying than lip sync issues. The indicator panel, as we mentioned earlier, isn’t that much use unless you’re up close and personal with it. Even then, the lettering is very difficult to read but if you can make it out, you will see there are lights for all the inputs as well as notification for when the surround mode is active, the detachable speakers are paired and power on or off. The Fidelio HTL9100 certainly sits toward the top of the soundbar price range and so we would expect it to not shy away from providing plenty of talking points here. As we’ve seen in other solutions, Philips has included orientation detection, meaning it will adjust its output dependent on whether it’s in table-top ‘mode’ or wall-mounted, on the supplied brackets. The HTl9100 will also switch in to surround processing mode automatically when the spekers are detached and is capable of decoding Dolby Digital and DTS 5.1 audio, as well as being able to apply Dolby Pro Logic II processing to stereo sources to create a pseudo-surround experience. This is what Philips term ‘Surround on Demand’ and we love the concept; we’ll find out if it delivers below.

At the core of Surround on Demand is a range of digital audio technologies including TI Class-D amplifiers with built-in DAC, while multi-channel audio decoding and Philips proprietary audio features are supported by a Cirrus Logic 32-bit DSP. Philips says their smart surround technology analyses individual sound signals in real-time, to provide a well-balanced surround experience and, again, the proof of the pudding will be in the eating - well listening. As we briefly alluded to above, the HTL9100 comes Bluetooth ready and we had no issues whatsoever in pairing a Samsung Galaxy Phone, Nexus 7 tablet and iPad 4 to it for reliable streaming. It’s just a matter of hitting the relevant button on the remote and completing the connection within your devices’ menu. We guess Philips could have gone NFC to make it even simpler but it’s probably overkill right now to do so.

Priced at just under £700 the Fidelio HTL9100 won’t be able to get by on looks and convenience alone so it’s good that it delivers where it really matters and, of the ‘mainstream’ brands we’ve tested, it’s certainly one of the best we’ve heard. Note we’re excepting the Paradigm SoundTrack and GoldenEar curio from that, as they sit somewhat outside of the Fidelio’s market place but it wouldn’t be disgraced in eithers’ company, to be fair. We were particularly impressed by the prowess of the subwoofer, which had plenty of presence, a lot of composure and no little agility. It doesn’t really look much and the thought of a 6-5-inch driver doesn’t exactly set the heart pounding – until you hear it, that is. A wolf in sheep’s clothing is probably an apposite description, in this case, so whatever Philips’ Doble Bass technology really means, it definitely works. Of course, the HTL9100’s major USP is its detachable speakers and the concept works, for the most part. Certainly with content packing 5.1 audio, the sense of surround is (naturally) greatly increased and the psuedo-centre speaker, created by Philips’ DSP (digital sound processing) does the trick, with clear, well located dialogue. There is a slight reduction in the front soundfield, however, which is another inevitability, but the overall sensation is definitely enhanced and we found ourselves unclipping the detachable speakers for virtually every Blu-ray we watched. We wouldn’t bother with 2.0 sources, however, Philips’ DSP isn’t really that impressive here and you’re basically just getting the front and rear surround channels replicated, only with the rear surrounds at reduced volume. It’s worth noting that there’s no individual level control for the ‘rears’ so some placement experimentation is required.

We’re often left bemoaning the musicality of soundbar packages but, pleasingly, that was not really the case here. The HTL9100 has been tuned to provide a warm, rich signature sound that lends itself well to most disciplines. Naturally there’s some personal preference at play here but we have a very diverse collection that never seemed ill-suited from Nirvana to New Order, through Ella and NWA. It’s actually quite hard to find a weak point with this package. It’s great with music and movies, looks lovely under the TV and works with the absolute minimum of fuss. We guess that some may baulk at the asking price but if you’ve decided a soundbar is the solution for you, and against the rest in this price sector, it is worthy of serious consideration.

The Fidelio HLT9100 soundbar will look gorgeous sat below just about any TV we can think of and the low-slung design means it wont intrude on the screen or get in the way of the infra-red sensor. It’s also extremely well connected with its two HDMI inputs and choice of various analogue sources,. And, if that’s not enough, it also packs Bluetooth compatibility for streaming audio from your phone, tablet or PC. Despite the presence of an HDMI output, the Fidelio lacks an on-screen display for set up but it does allow the HTL9100 to utilise the ARC feature of your TV, meaning any kit hooked up to it can utilise the enhanced sound quality the package provides – with just a single cable.

The HTL9100 certainly isn’t the cheapest soundbar package out there but it really does deliver on the audio front and, compared to most its closest price competitors, shows them a clean pair of heels. The subwoofer was particularly impressive, producing taut, impactful bass with no little agility. It just goes to show you can’t always judge a book by its cover as its appearance would suggest something a little more demure and restrained. Of course the major USP of the package are the detachable speakers that can be placed as rear surrounds and this worked very well with material using 5.1, if not so much with stereo sources.
Philips has produced a little cracker with the Fidelio HTL9100 – it looks the part, couldn’t be simpler to use and, most importantly, produces warm, room filling audio that justifies the ticket price. And, best of all, when the rest of the house goes to bed, you get that surround sound system you really wanted!