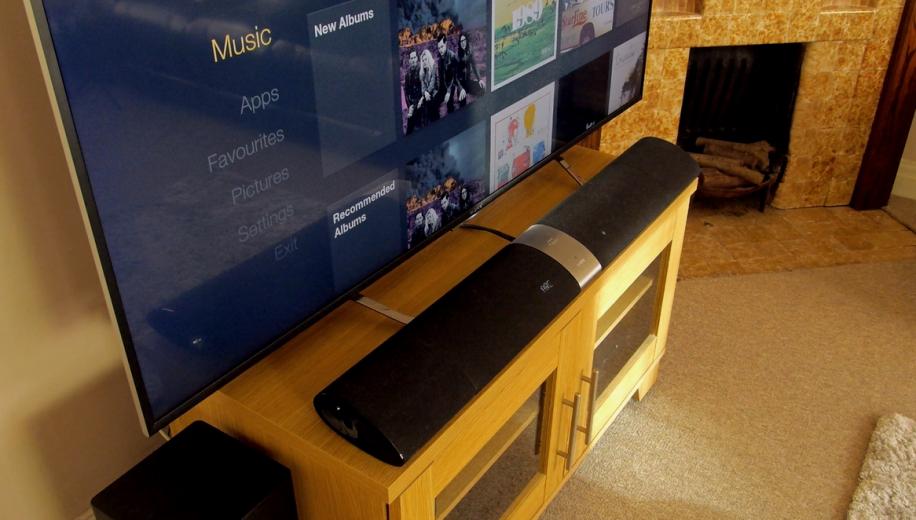 What is the Philips Fidelio B5?

This is the follow up product to the highly regarded HTL9100 and, like its predecessor, the B5 system feature unique (to Philips) detachable speakers that can be placed behind the listening position to create a true surround sound experience. With an asking price just short of £600 (September 2015), this definitely isn’t a budget package but the inclusion of some new features and technologies give us hope that it will justify the money. Read on to see if it does…

The B5 sports what Philips term as an airfoil design, which is very low-slung and shaped like a tear drop when viewed from the side aspect. It is totally bedecked in a fine black mesh cloth, aside for the middle portion which features a curved chrome panel with a power button inset. We’re glad to see that Philips has done away with the previous indicator panel, which was hopeless, and instead this new revision features a ‘proper’ visual display giving feedback on input, volume, sound modes and the like. The bar – with detachable speakers attached – measures 103.5cm across so will ideally suit TVs in the 42-50inch range and at only 7cm high, it should sit beneath most TVs without obscuring any of the screen. This is a very well connected package with 2 HDMI inputs as well as an ‘out’ to take advantage of TVs with Audio Return Channel (ARC) compatibility, allowing the television to send audio ‘upstream’, cutting down on the number of cables behind the TV and also meaning you can use the TV’s remote to control the volume. There’s also a 3.5mm L/R stereo audio and both coaxial and optical digital audio connections to choose from. If that’s not enough, the Fidelio will happily communicate with your Bluetooth enabled PC, Smartphone or Tablet to stream your music collection or even as an accompaniment to games and other apps. The matching black wireless subwoofer unit is unusually tall and slim, at 51cm high, but its footprint is small as it only spans 20cm, both in depth and width. The sub is ready-paired in the factory but if it ever loses sync, it’s a simple case of pressing a button on the back to re-pair. The detachable speakers have also had some revisions and now feature both a power button and one to initiate Bluetooth pairing, should you wish to use them as standalone wireless speakers, which is a neat touch from Philips.

As befitting a soundbar in this price category, the B5 packs in a whole host of features that elevate it from the pack. Chief amongst these – and the major USP for the package – is ‘Surround on Demand’ which features a range of digital audio technologies including TI Class-D amplifiers with a built-in DAC, while multi-channel audio decoding and Philips proprietary audio features are supported by a Cirrus Logic 32-bit DSP. Philips says their smart surround technology analyses individual sound signals in real-time, to provide a well-balanced surround experience and the proof of the pudding will be in the eating - well listening. As we alluded to above, the B5 comes aptX Bluetooth ready and also features orientation detection, meaning it will adjust its soundstage dependent on whether it’s in table-top ‘mode’ or wall-mounted. The package will also switch in to surround processing mode automatically when it senses the speakers have been detached and it can decode Dolby Digital and DTS 5.1 audio, as well as being able to apply Dolby Pro Logic II processing to stereo sources to create a pseudo-surround experience.

The B5 doesn’t feature any operational buttons on the soundbar so all control is assumed by the supplied remote. It’s a much better example than its predecessor and sports an attractive two tone design to match the bar. There are dedicated buttons for all the inputs, volume functions and the sound modes and the buttons are easy to find and reasonably well spaced. We like that Philips has thought to put an Audio Sync (both negative and positive) on the remote as some other manufacturers don’t and there’s nothing more annoying than lip-sync issues. If your TV has an HDMI port with ARC (Audio Return Channel) capability then, for ease of use, that’s probably the route you want to go down. The major advantage of ARC is that it allows the audio signal of any sources connected to the TV to be carried by just one lead, although if you want to take advantage of the multi-channel, Dolby Digital and DTS decoding sources such as your Blu-ray/DVD player or set-top box, they should be routed through the dedicated HDMI inputs on the soundbar unit. For those that don’t have a TV with ARC, your best bet is the Toslink digital audio connection and, failing that, you can take a 3.5mm lead out of its headphone socket in to the B5.

As we said earlier, it’s been two years since we reviewed the predecessor of this product but very little has changed in terms of the sound quality; if anything it’s been tuned to be a bit safer so it could sometimes sound a little flat and uninspiring, particularly at lower volume levels. Things get much more lively when you crank up the volume which, in fairness, if you’ve bought a soundbar to be more immersed in the listening experience, you should be doing anyway. The sub, in particular, needs the extra volume to get its juices flowing.

Naturally, what most people will be interested in, when considering this particular product, is its unique surround capabilities via the detachable speakers. There are some systems out there, notably from Yamaha, that are very good at creating a surround effect despite the fact the sound is only projected from the front but the B5 has a natural advantage over those, of course. The result is you get effects and audio delivered from behind which are totally convincing. The nifty calibration feature of the B5 also means you can be fairly flexible where you placed the detached speakers. In isolation, when used as solo Bluetooth speakers, they aren’t anything particularly special but they work well within the system and that’s just a bit of a bonus in any case.

Tuning is on the safe side but real surround sound is a huge bonus
There is a bit of a compromise in this approach, however, although how much you will feel it is open to question. The front soundstage is definitely somewhat diminished by the lack of width once the speakers are removed from the bar so effects don’t sound as well placed as other soundbars we’ve heard. It’s nothing drastic but those with well-trained ears will notice although we have to give credit to Philips’ pseudo-centre speaker processing which keeps dialogue very well anchored to the centre of the screen.

The B5 has been tuned to provide a warm, rich signature sound that lends itself well to most tasks, including music and the inclusion of aptX Bluetooth technology is a definite plus for those that like to stream from a phone or tablet. Of course, there’s a great deal of personal preference to take in to consideration here and some will prefer something less conservative with more get up and go but my fairly diverse tastes were satisfied with the B5.

Should I buy the Fidelio B5?

The Philips Fidelio B5 soundbar is a unique solution to a problem many will have; namely, getting the OK from your significant other to place speakers in parts of the room where they think they don’t fit. There are no unsightly trailing cables and when you’re not in true surround mode, you can simply reattach the rears to the main bar and still achieve a listening experience far superior to that provided by the speakers built-in to your TV.

The system also benefits from being extremely well connected with options including HDMI, Toslink digital, stereo and Bluetooth – as a bonus it’s aptX capable for highest possible streaming quality. It’s also a very good looking package with a sensible low profile design that keeps it from getting in the way of the screen. Most importantly, the B5 manages to sound really good – if slightly anodyne at low levels – with both music and movies and the latter benefits greatly from the inherent true surround afforded by the innovative detachable speakers. At near £600, it’s certainly not the cheapest option around but if you want what the B5 has to offer, there is no real alternative. Recommended.

Well, there isn’t a direct alternative to this system but the Yamaha YSP-2500 makes an excellent job of placing sounds behind you, without the need for rear speakers and can be had for a similar price to the Philips. For those that have a curved TV and want something to match, the Samsung HW-J7500 is also a solid choice but if you really want a proper surround set up, at a similar price to the B5, then you should look no further than Q Acoustics 3000 5.1 Speaker System which is unbelievable for the price and will blow everything else we’ve mentioned out of the water, sonically speaking, but you’ll need a way to hide those cables.


You can buy the Fidelio B5 here