Real Atmos and every HDR format 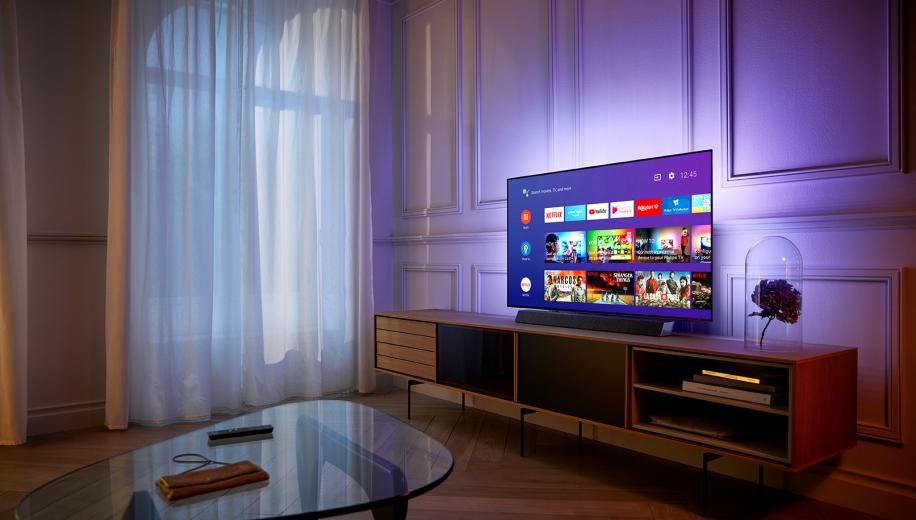 The Philips OLED+ 934 is a mid-range 4K TV with support for high dynamic range and Dolby Atmos. The TV has an attractive European design, with an excellent level of fit and finish. Philips has taken an agnostic approach to high dynamic range with support for HDR10, HLG, HDR10+ and Dolby Vision. The 934 includes the 3rd gen P5 picture processing engine, runs the latest version of the Android operating system and includes 3-sided Ambilight. The Bowers & Wilkins sound system is based around a separate speaker that uses a 2.1.2-channel layout with upward-firing drivers.

Note from the Editor: This is a hands on and is the first look at a new product on a manufacturer's stand at the IFA show. The full in-depth review with our usual weeks of real-world use and measurements will follow when we receive the finished retail version of the TV in our own test rooms. However, we do think it is important to produce a hands on feature so we can give you, the AVForums reader, an overview with the correct information and our opinion based on an early look. The Philips 934 has a stylish design that uses a chrome bezel and frame, combined with a speaker bar integrated into the stand. This stand can be removed, and those wishing to can wall mount the TV using an included bracket. The speaker bar has been designed by B&W and uses a 2.1.2-channel layout with two forward-firing drivers, two upward-firing drivers and a built-in subwoofer. The entire speaker cabinet is wrapped in Kvadrat fabric, which will match most modern furnishings.
Stylish looks and a separate B&W speaker help the 934 stand out from the pack The Philips 934 includes a full set of connections with four HDMI 2.0b inputs, one of which supports ARC (audio return channel). The HDMI inputs also support auto low latency mode, and there are USB 2.0 and 3.0 ports, along with a dual tuner. In terms of wireless connections, the 934 includes 802.11ac dual-band Wi-Fi and Bluetooth v4.2.

In terms of controls, you get Philips's handy dual-sided remote with all the necessary buttons on one side and a QWERTY keyboard on the other. The controller has a microphone built-in for voice and interacting with Google Assistant or a connected Amazon Alexa device. Sadly, the cool-looking wand that Philips included with its higher-end TVs last year is missing. The 934 might be mid-range but it includes an extensive set of state-of-the-art features. The picture is based around an LG-sourced OLED panel that can support 4K/60p, along with high dynamic range and wide colour gamut (Rec.2020). Philips has wisely chosen to support all the HDR formats, including Hybrid Log-Gamma (HLG), HDR10+ and Dolby Vision.

The 934 includes the 3rd generation P5 processor which now uses a dual-chip arrangement designed to add extra computational power to key intensive parts of the processing chain. The result is a doubling of the processing power that leads to a 30% increase in picture quality. The 3rd generation of P5 extends picture performance by improving noise reduction, sharpness, colour accuracy and contrast.

The 934 has quad-core processing and uses the latest version of the Android OS (v9 or P for Pie) which not only promises a more intuitive and cleaner user interface, but also has Google Assistant built-in. For those that prefer Amazon's AI, it will work with Alexa devices as well. The Android OS was buggy at launch, but I find the Philips's implementation to be considerably more robust than Sony's efforts.

The inclusion of Android means you also get Chromecast and Google Play Store, along with most of the video streaming services including Netflix, Amazon Prime, YouTube and Rakuten TV. Since this is a Philips TV, it naturally includes Ambilight, a feature unique to the company that has proved very popular. In the case of the 934 you get 3-sided Ambilight to enhance your viewing experience. The Philips 934 sports a custom designed speaker that was specially developed for this TV by Bowers & Wilkins. Last year B&W was hampered by the fact that the design of Philips's OLED TVs had already been established, forcing them to fit the drivers into an existing space. This time the engineers at B&W could start from scratch, and build a more complete audio solution.

The 934 features a separate speaker enclosure that combines with a minimalist metal angled arm to act as the set’s table top stand; although there's also a wall mount option (and you can set the EQ accordingly). The Kvadrat fabric covered, rigid speaker enclosure is constructed from thick-wall-section glass-fibre-reinforced ABS, critically braced with internal rib sections to control any unwanted resonance. In addition to four 30mm mid-range drivers, two decoupled 19mm titanium tweeters and a centrally mounted Flowport-ported 80mm subwoofer, the 934 has twin 50mm upward-firing Dolby Atmos elevation units mounted on the top of the enclosure to give extra scale, height perception and immersion to the audio reproduction of films, games and sports broadcasts.

The 934 is the first Philips TV to include a 2.1.2-channel speaker system with built-in upward-firing drivers. This separate unit is a speaker rather than soundbar, because the 50W of amplification is built into the TV itself. It will automatically recognise and decode Dolby Atmos content to deliver the very best results. Alternatively, by engaging Movie mode, the TV will use ‘up-mixing’ with non-Dolby content.

The 934 sounded great with Dolby Atmos content, and there was definitely sound emanating from above in the various Atmos demo sequences. I was sat in the exact sweet spot, allowing me to get the best possible immersive audio experience from the 934. Although there wasn't any surround presence behind me, the audio did extend further to the sides and above the screen, while dialogue remained focused.

My only criticism would be that the bass from the built-in subwoofer was somewhat lacking, especially compared to the flagship 984. The Philips 934 delivers great-looking images, although that's based on watching carefully chosen demo footage on a show floor, rather than based on any critical viewing under controlled circumstances. However, the 934 certainly demonstrated all the main attributes of an OLED TV, with lovely colours, inky blacks, and dynamic contrast. The 3rd gen P5 processing delivers excellent noise reduction, upscaling, and motion handling, while pulling more detail from SDR and, thanks to superior tone mapping, HDR content. Philips has wisely decided to take an agnostic approach to high dynamic range, which means the 934 supports HDR10 (just like any other HDR TV), Hybrid Log-Gamma (HLG), HDR10+ and Dolby Vision. The inclusion of the latter two means users will be able to enjoy the benefits of both dynamic metadata formats. This approach will give the 934 an edge over much of the competition because most manufacturers (apart from Panasonic) support one format or the other.
A full-house of HDR formats and 3rd gen P5 picture processing is sure to prove popular
The Philips OLED+ 934 is an excellent mid-range 4K TV that boasts an attractive design, an impressive array of features and a bespoke 2.1.2-channel sound solution that supports Dolby Atmos. The picture quality is exceptional thanks to the inclusion of the 3rd gen P5 processor, and this TV supports every version of high dynamic range including HDR10+ and Dolby Vision.

The 934 sports the latest version of the Android OS with built-in Google Assistant, although it also works with Amazon Alexa. You even get 3-sided Ambilight, Philips's nifty dual-sided remote control, and a B&W speaker, making this a TV that looks good and sounds better. The 934 has been priced to compete against the likes of LG's E9 and Panasonic's GZ1500, and it's more than capable of holding its own against both.