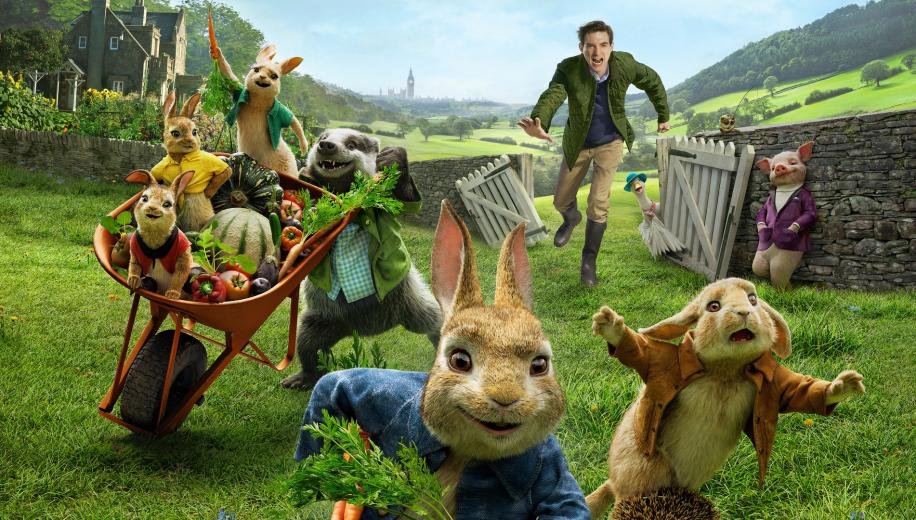 With Beatrix Potter likely hopping in her grave, Peter Rabbit gets a mean-spirited film adaptation that will at least keep the kids entertained.

Taking its cue from the wise-cracking rabbit cues of Hop, and putting it through the Smurfs formula of live action / CG combo, Peter Rabbit is a nasty little film celebrating theft, property destruction, wilful sadism and a rather twisted view of human/animal (mis)behaviour.

Gone are the more homely, warm overtones of Potter's source work, which at least chastised its mischievous lead character for venturing into Mr McGregor's deadly territory, and dealt with consequences of such behaviour whilst also championing the underdog efforts of Peter Rabbit and his friends in such adventures as retrieving his clothes, or stealing a cabbage to feed his starving cousins.

This Peter Rabbit movie turns Potter's tales into a sequel to Bad Neighbours, celebrating raucous parties, adolescent behaviour and the torturing of humans who - on the face of it - just don't want nuisance animals tearing through their vegetable patches. It's a misguided effort replete with such odd sentiments as "they were here first" which is a particularly ignorant statement to hear from the rather overly capricious female protagonist. It doesn't help that Peter is voiced by James Corden either.


The saving grace is that the film is absolutely captivating for younger children.

Peter's raison d'être is to get into the McGregors' garden - handed down from grumpy uncle to slimy nephew (don't even get me started on the scene where Sam Neill's old McGregor catches Peter and collapses) - positing himself as something of a hero amidst his kind, even if he's more like a delinquent menace. Protected by Rose Byrne's ridiculously whimsical rabbit-lover, we follow Peter and his chums (voiced by the likes of Star Wars' Daisy Ridley, Suicide Squad's Margot Robbie and Man from Uncle's Elizabeth Debicki, although you'd be hard pushed to tell them apart) as they wreak havoc, only all-too-late stopping to question the behaviour, which eventually escalates to full-scale war, of these pesky rabbits.

The saving grace is that, much like Smurfs - which at least thankfully was a much more pleasurable experience to endure as an adult - the film is absolutely captivating for younger children. Whether or not they'll ever want to tidy up the messes they make ever again is an entirely different question.

The combination live-action/CG film was shot at resolutions of up to 3.4K, but is reportedly capped not only by VFX finished at 2K, but also a 2K Digital Intermediate, which has been used here for this Ultra HD Blu-ray release.

Whilst there is a modest, at times obvious and at times barely perceptible increase in detail - which renders blades of grass and strands of hair (or fur) with just that little bit more clarity and precision - it's largely in the HDR and WCG, as is normally the case for UHD Blu-ray discs, for this 4K presentation to distinguish itself from its 1080p HD counterpart.

The end result in this department is some added lushness and vibrancy to the dominant green grass and country setting, with the bright reds and yellows of the tomatoes and sunflowers, respectively, popping against the almost preternaturally green backdrop.

The presentation is visibly enhanced in this respect, at its height in the wide open, enjoying what the contrast and colour enhancement tools can do for the environment. Black levels too are rendered impressively, rich and deep. It's hardly demo territory, but it's a modest improvement overall.

The Peter Rabbit 4K Blu-ray also earns itself something of an upgrade in the audio department too, with a full bells-and-whistles Dolby Atmos track although, much like the video, there'll be varying mileage over how much of an improvement you might find it over and above the Blu-ray's DTS-HD Master Audio 5.1 track, which is by and large replicated for the Dolby TrueHD 7.1 core here.

Affording dialogue prioritisation across the frontal array, coming across clearly and coherently whether human or bunny-derived, the somewhat generic but nonetheless perfectly suitable and admirably enthusiastic score (peppered with some welcome song tracks) provides much of the background support and immersion, sweeping you up through surround usage.

Effects are myriad given the setting, with blackberry assaults and vegetable patch chases comprising equivalent action elements and allowing for further displays of surround prioritisation and discrete dissemination. It's hardly an engulfing track, however, running short of demo or reference territory but still providing a solid audio accompaniment.

Nothing on the 4K disc but the bundled Blu-ray contains a Mini-Movie, a Featurette and a Dance-Along Feature.

This is not the Peter Rabbit that many adults have grown up with (hell, even the CG TV series was more in-keeping with Potter's sentiments than this), eschewing morals - or, at best, playing a very long game in that regard - in favour of some at times unpalatable misbehaviour. Adults would get more mileage out of watching the fantastic Fantastic Mr. Fox again, and although kids will be wrapped up in this colourful little world, there are some not very palatable themes here involving heart attacks, allergies, prejudice and a (at least for the first half) complete lack of consequence to your actions which may leave some parents wishing they'd stuck on Smurfs instead.


Adults would get more mileage out of watching the fantastic Fantastic Mr. Fox again.

The 4K Blu-ray release of Peter Rabbit does offer a modest, albeit hardly striking, upgrade over its 1080p counterpart, leaving it technically the definitive way to own the film for those fans out there.