Is this the Paddington 2 of Peter Rabbit sequels? Nah, more like Citizen Kane. 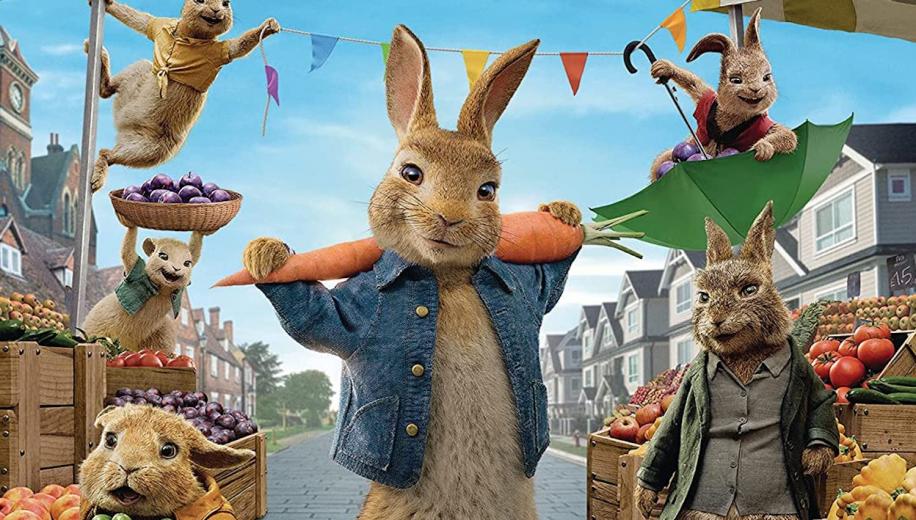 Although it probably won't mean much to everybody else, Peter Rabbit fans will find that this surprisingly self-aware sequel is a marked improvement over its just-above-average predecessor.

Voluntarily watching a movie headlined by James Corden seems like an unwise decision to any sentient life form, and returning for a sequel to said movie is, well, just plain not learning your lessons. But Beatrix Potter's Peter Rabbit tales are classic fare for children, and the first movie proved well-intended family viewing for kids who likely lapped up the CG bunny antics whilst their parents were at least not offended at having to sit through it with them. A sequel to the massively popular original was inevitable, but rather than just go through the motions, Easy A writer/director Will Gluck returns to do a follow-up with a bit more script bite, trying to afford a degree of self-awareness and welcome in-jokes that could potentially have adults enjoying this somewhat more than they were expecting. It's hardly a Lord & Miller effort (Spider-Verse, Lego Movie) or even a Lord & Miller-produced effort (Mitchells and the Machines, Lego Batman Movie), but the effort to improve the formula does not go unnoticed.

... a degree of self-awareness and welcome in-jokes that could potentially have adults enjoying this somewhat more than they were expecting

The game cast of voice actors is a veritable who's who, with Margot Robbie (Suicide Squad), Elizabeth Debicki (Tenet), Sam Neill (Jurassic Park), David Wenham (Marvel's Iron Fist) and - of course - Corden, all returning, now joined by Lennie James (Save Me), Damon Herriman (Justified), and Hayley Atwell (Marvel's Agent Carter), whilst live actors Rose Byrne (Instant Family) and Domhnall Gleeson (Rise of Skywalker) return as Potter and McGregor (as well as voicing a couple of supporting animals), now joined by an extremely smug David Oyelowo (Chaos Walking). And Corden is actually pretty tolerable, with the script more than happy to poke fun not just at his character but at his voice, whilst trading in several genuinely good jokes (the entire Farmers' Market description is superb, down to overpriced bath bombs and people who dress as farmers as a style) which are clearly - and kindly - only written for the adult contingent. The deer is a gag that just keeps on giving, the sugar high gets some mileage, and the underlying - albeit formulaic - plot is actually pretty respectful of an author who may well have faced her own challenges/temptations like this on the way to making Peter popular. It's still pretty throwaway, but at least they made the effort to at least attempt a Paddington 2, whatever that means these days.

Peter Rabbit 2 comes to UK 4K Ultra HD Blu-ray courtesy of Sony Pictures Home Entertainment, in advance of their upcoming US 4K release, which is presumably identical. This Ultra HD Blu-ray release delivers a strong upscaled image that enjoys the bigger budget, scale and better style than the first outing.

... a strong upscaled image that enjoys the bigger budget, scale and better style than the first outing

With a not insignificant $45 million price tag, Peter Rabbit 2 is a fairly on-point offering, with strong detail that extends to the fur on the CG creations, and some gorgeous landscapes (even if the Windemere setting rarely makes an actual appearance, doubled by... Australia). There's rarely any visible softness, and the CG stands up pretty damn well. It may well be an ostensible upscale, but there's nothing striking to speak to that fact, maintaining a rich environment and the kind of crystal-clear image commensurate with this sort of kid's fare.

The colour scheme is unsurprisingly vibrant, enjoying those lush green landscapes, bright blues skies and the pop of the various outfits, the sweets, and even the damn tomatoes. It's not so excessive as to look out of place within the rural setting, but it affords some nice range, displaying the efficacy of the HDR and WCG at rendering such a rich palette organically, all the way through to deep and inky black levels, for as infrequently as they are utilised.

... revels in the cartoon action and mayhem

Dialogue is rendered clearly and coherently throughout, but is hardly the important feature, with a storm of effects bringing everything from garden patches to bustling Farmers' Markets, to train rides and car chases to life with aplomb, complete with a bunch of comic book style slapstick moments that land with a suitable whizz and thud. The score thrums along adding to the feverish pace, and the track maintains engagement on this rollercoaster ride.

Sony's 4K releases boasts no extras on the 4K disc itself, and a few meagre supplements listed on the accompanying Blu-ray.

There's a Crafting Bunny Bookmarks feature, a Create Your Own Woodland Terranium feature, and a couple of holdover features created from the first film, including a Making Your Own Garden feature and a Flopsy Turvy Mini Movie.

Peter Rabbit 2 is far better than it has any right to be. Yes, adults sans kids will probably still find little reason to bother, but those who have to endure stuff like this practically for a living, might be pleasantly surprised that it's, well, not too bad.

... this surprisingly self-aware sequel is a marked improvement over its just-above-average predecessor

Sony's UK 4K release of Peter Rabbit 2 boasts an excellent native 4K image and a superb Atmos track, as well as a few nice extras ported over to the 4K disc proper, leaving it a very strong package for fans to pick up.