Do Konami's boys still have the legs to run rings around the competition, or has this Master League team seen better days? 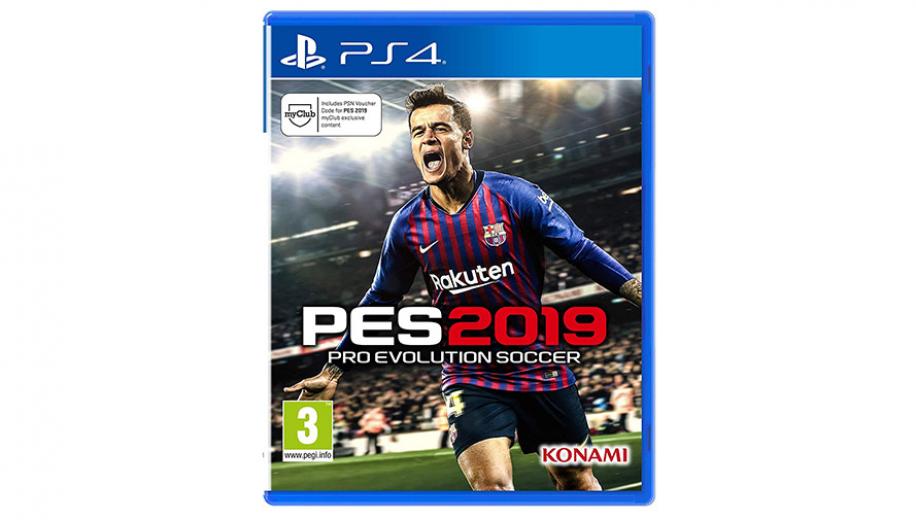 It's probably about time PES gave up trying to keep up with FIFA in the presentation department. This year's kickabout is the first since Konami lost the Champion's League license back in April – a major blow to the authenticity credentials of a series that has forever existed in the shadow of its rival in that regard, and a loss that only makes the sporadic morsels of officially-licensed content in PES 2019 feel all the more out of place. Would the game be a harder sell without a famous face to stick on the box? Of course, but it's not like that'd be a new challenge for the team. Go back to Pro Evo's roots and there's nary a familiar name nor an official license in sight, yet the games that pre-date the franchise's pursuit of authenticity via licensed content remain among the most critically acclaimed releases in its chequered history. It was all about the gameplay. That's what fans and critics alike loved about it, and PES is still top of the table in that regard today. But the more it has tried to play catch-up to EA in recreating the real world beautiful game, the more Konami's side has wound up looking increasingly amateurish. And now, with the UEFA top flight setting up shop in the opponents' dressing room, that's even more glaring and gutting than ever.

It's a real shame too, because nobody is going to question the quality of PES 2019's on-pitch action. PES has always been a series where freedom of approach is paramount, and that remains true. Tight, intuitive basic controls let novices string together passes and smash out soaring strikes, while several layers of complexity beneath the surface offer more experienced players a peerless degree of control over both player and ball movement. You could get lost in the countless pages of commands and inputs in a modern FIFA game, but the majority of it is pure peacocking – fancy yet impractical showboating or over-the-top goal celebrations. PES' equivalent is all about functionality and that couldn't be a more accurate analogue for the gulf between the two series. FIFA has always looked the part, but PES has typically been the deeper and more technical take on the sport, its variety and complexity letting players tell their own stories of Master League success where its rival found more success simply retelling those seen on TV most Saturday afternoons. At its best, then, PES 2019 can still produce some truly outstanding moments and supremely satisfying passages of play, but those flashes of true excellence also serve to highlight the weaker links in the squad. PES' clinical and methodical approach works as well as ever in its gameplay, but it still doesn't translate well to its general presentation. Try as it might, Konami can never seem to get menus right, with whatever mode or feature you're after always hidden away behind one too many boxy sub-menus. Something like the in-depth Master League mode – a returning fan favourite where you play and manage a custom club rising through the ranks to international success – naturally has a lot of data and options to present, but it could be handled so much better. Post-match alerts, for instance, flag up the string of menu options that will lead you to the right page rather than simply having a 'go to page' button on the alert itself, while the back-and-forth nature of checking multiple pages would have been easily avoided merely by having tabs to cycle through them like, y'know, every other multi-page menu in a videogame since the Nineties, and even some of the game's other menus. Master League just ends up feeling needlessly fiddly as a result, taking some of the fun out of the otherwise enjoyable management side of things.

Presentation on the pitch is similarly hit-and-miss, with such fluctuation in asset quality between things like player models, stadia and animations that the most extreme examples could be lifted from two different games. Commentary, meanwhile, is just straight-up poor, laughably so in places. Peter Drury spends the first ten minutes of most matches talking about the weather before being surprised every time that the match is underway already by the time he's finished waffling, while Jim Beglin coughs up staccato blasts of cliché and non-sequitur like a broken Alan Partridge sound board. You'll be sick of hearing saves described as 'sparkling' within a match or two, but at least Drury getting overly worked up about any shot on goal like a proud dad on the touchlines at his kid's first match is hilariously unprofessional. PES also has an unhealthy obsession with replays, cutting away from gameplay to show every clear-cut offside, every half-chance on goal and every apparent foul again as if players are actually going to want to watch all of these non-events back. Skipping them might only take a few seconds a pop, but that all adds up over the course of a match. TuFor all its issues off and around the pitch, PES still plays a fantastic game of football. You'll frequently be amazed by a lovely piece of close control or a glorious first touch, and none of these are just canned animations – with the right players, good positioning and enough skill, all of these fluid and impressive moves can be recreated quite easily. With stronger teams, this allows competent players to stroke the ball around with an air of confidence and unpredictability, making for flowing passages of play that are as great to watch as they are rewarding to pull off. It's much harder to win contested aerial balls now and jostling for possession takes time to master, although it's still not exactly easy even when you know how to work around your man and come at lofted balls from more workable positions. Because of this, headed goals seem fairly infrequent and corners can therefore feel more like a booby prize than a genuine chance to create an attempt on goal. Towering headers do naturally feel that much better when you do manage to land one, however – an oddly satisfying trade-off, especially when most footy games make headed goals more or less free.


Presentation on the pitch is hit-and-miss.

Playing against a human opponent, you get to see the gorgeous flowing play that PES facilitates running up and down the pitch, and it's wonderful. Play against the AI, however, and it's a different story. AI players seem to have no interest in making the game interesting or utilising any kind of variety in their approach. Every time they reach the final third, all they ever seem to do is tap the ball around on the outside of the penalty box before playing a cross-goal pass or two to a man in space, looking for that same cheap or 'sweaty' goal that you might remember recall chastising mates about in previous PES games. Even when you grow wise to it, they keep trying – there's never a speculative 25-yard shot or awesome solo effort to spice things up... rarely even a cross into the box that leaves the ground. Against the AI, it's all on you to make the magic happen, but working so hard for a genuinely impressive goal only to have the AI equalise or steal a late win with a soft reply like that is always disheartening, doubly so since the commentator clowns rub it in by talking about those cheap, easy goals with the same kind of reverence as if they were watching Pelé in his prime. PES 2019 is a more-than-competent football game in a lot of the areas that matter, but it's one held back from reaching and exceeding former glories by a stadium full of frustrating issues.

Visuals vary from amazing to pretty rough, presentation is weak across the board, and the minimal spread of high-profile licenses means that FIFA will continue to be the game of choice for those who want the most accurate recreation of the match day experience.

If you're not so bothered about that level of authenticity and just want a soccer game that plays really well, you'll find one here. The only problem is that to get to it, you'll have to wade through a ton of needlessly convoluted menus and sit through a bunch of replays of nothing happening, not to mention putting the time in to master the nuanced controls if you want to do anything flashy.

Is it worth it? We'd say so, particularly for life-long PES supporters who are by now more resilient to these kinds of quirks, but life is always hard for Konami in this field given that its chief competitor is one of the most established, accessible and commercial game series on the planet.