A poor port of a good console title 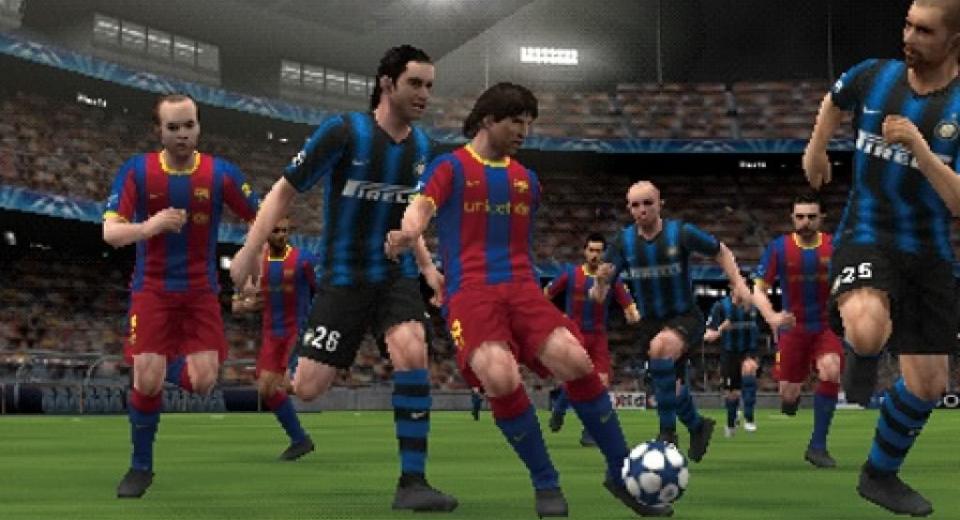 No matter what format you choose to play games on, you can never get away from the fact that football games are here to stay. Nintendo Wii has had its fair share of football games of varying success, whilst publishers such as Ubisoft have had their own go at making a successful sports game; Pure Football But when it comes to football games, Electronic Arts (developers of FIFA) and Konami (developers of PES) are the kings that battle it out each year in an attempt to outdo one another and produce the ultimate football title.

So the battle rages on as ever this year, and it also spills over onto the handheld market with PES 2011 getting a new lease of life on the PSP. The handheld market is often seen to be inferior to the consoles as it can’t produce the same processing power as the likes of the Xbox 360 and PlayStation 3, but this is a misplaced argument as despite its lower power PSP has had its share of recent titles that have wowed its audience. Just take a look at Metal Gear Solid: Peacewalker and Kingdom Hearts: Birth by Sleep, so there’s potential in this market yet.

Konami created a solid football game on the consoles, so it would be expected that this would transfer over to the PSP if they want to take on the likes of the mighty FIFA once again. If pushed, the PSP can produce games that appear as if they were being played on a PS2 console, so if Konami get the formula just right, then they could not only have a game that plays well but also one that is graphically of a high quality.

One main criticism with the console version of PES was that it had an unsuitable tracklist whilst navigating the menus, which unfortunately makes a return here too and turning a negative into a positive; the sounds are crystal clear through the speakers. There’s no distortion or weakness in the quality despite the size of the PSP’s speakers, so things like the crowds’ chants come through nice and clear when playing at stadia such as Old Trafford. Both commentators, Jim Beglin and John Champion make a welcome return, with analysis that suits the game very well and there are few errors with the flow of it all.

The overall clarity of PES is also of a high standard that suits the small screen it plays on very well, with menus and the information they portray easy on the eye and it isn’t a struggle to read. The structure of these menus is more or less the same as that of the consoles, navigation is quick and easy due to their simplicity, so you’ll feel instantly familiar when you load 2011 up. One feature that has been omitted is the drag and drop substitution mechanic which worked very well on the PS3’s controller and made the changing of players very easy. Although it’s not too difficult to do so anyway on the handheld game, it’s more so than the method used on consoles and it often leaves you wondering why it has been cut nonetheless.

As mentioned before, the PSP has the capability of producing graphics that can rival that which the PS2 could offer, so you’d expect some high standard looks for PES 2011 judging by how they polished up the console version. In some cases, you’d be right but in others they feel lacklustre and could do with a bit more polish. The in-game pitch view leaves a lot to be desired, with character models being a bit too angular and the actual gameplay not seeming at all free-flowing. Overall movements are very stop-start and looking laboured, whilst the ball springs off players’ boots when their foot appears to be too far away to make contact. On the other hand, during goal celebrations and with other animations you can see a life-like resemblance in the player models, especially those who feature in teams that are licenced, so there are some positives with regards to the graphics.

There were a few complaints with the console version of Pro Evo 2011 as the player movement didn’t seem to flow and allow as much free movement on the ball that FIFA 2011 did, which sadly transfers over to the PSP version. Not only that, but it feels as though it has got worse with a prolonged delay between your input on the handheld to the action on screen, making it difficult to remain in possession of the ball when trying to dribble in and out of the midfield. Adding to your possession woes, there’s no choice to perform tricks and skills whilst on the ball so no longer will you leave your opponent dazed and confused when you nip the ball through their open legs. In some instances, this leaves a lot to be desired as gameplay can become boring and repetitive, but for those who ignore these skills then it won’t be that big a deal.

A key selling point of PES 2011 was that passing no longer automatically went to the feet of the desired team mate, meaning the player needed some skill in order to complete their passes. Well it seems Konami have stripped their loyal portable-loving fans of this amendment and the auto-passing feature returns, making it far too easy for you to pick out whoever you wish. That’s what Konami intended by bringing back the feature,but when you press the pass button, the slightest tap sees the power bar nearly fill up and leaves your player stranded without the ball and at the mercy of a counter attack. This also applies to the shooting aspect of play, with the ball firing off your boot with the gentlest touch of the square button, which is fine if you fancy your luck from the halfway line but when in the box, shooting leaves a lot to be desired.

The problems don’t end there though, as Konami’s over reliance on ground passing to let you score still prevails, but with the above problems you can have with the passing in the first place, it gets increasingly frustrating when you see few goals scored in your favour. Through ball passing seems to be the only consistent way of scoring as your crosses are never threatening to your opponent and are cleared with little problem. Even on amateur your opponents are too dominant, which may leave a lot of players alienated by forcing them to play on the easiest setting as they’ll have a hard time beating the opposition defence when in possession of the ball.

There are some positives for those who persevere with PES 2011 though such as being able to change all the unlicensed teams to have their proper squad names (instead of Merseyside Red/Blue) and you can alter league titles too should you wish to. Hand in hand with this is the wealth of data that is available to you, revealing team and individual statistics with regards to their previous performances and their overall skill levels. This is presented in a user-friendly manner, like the main console version, and doesn’t leave you confused or overwhelmed with stats.

Pro Evo’s replayability depends on how much you love your football games, and more importantly, how much you love your PSP over your consoles, and given that this is far from a perfect transfer from the PS3, it’s hard to see anyone being distracted from their console for very long unless on the bus. There is a multiplayer aspect to the PSP version too via ad-hoc mode, which pits players one-on-one against each other as well as a four player mode, but having not had any hands on experience with this, I can’t comment on its quality or how well it works. It would probably be a safe assumption that Konami have given a fair amount of attention to their multiplayer mode in order to boost the game’s appeal to those of a competitive nature.

It’s hard to see how PES 2011 can compete in the current games market considering that there is a far superior version available on console, and there seems to be a recent backlash against the PSP so this will more than likely go ignored. This is an ideal stop-gap for anyone who travels via public transport regularly though and can’t bear to be parted from their football fix for too long, but if you already own 2011 on console and don’t travel that often, then you would be better off playing that version instead.

Top of the League

The market for ports of console games onto hand held's is one that can be lucrative and also one that is difficult to master. Konami have seen the potential in this market but have somehow managed to completely mess up their changes of exploiting it. PES 2011 is difficult to play through its scontrol scheme and AI whilst it lags far behind other titles out there in terms of its graphical quality. Unless you are forced otherwise; stick to the console version.