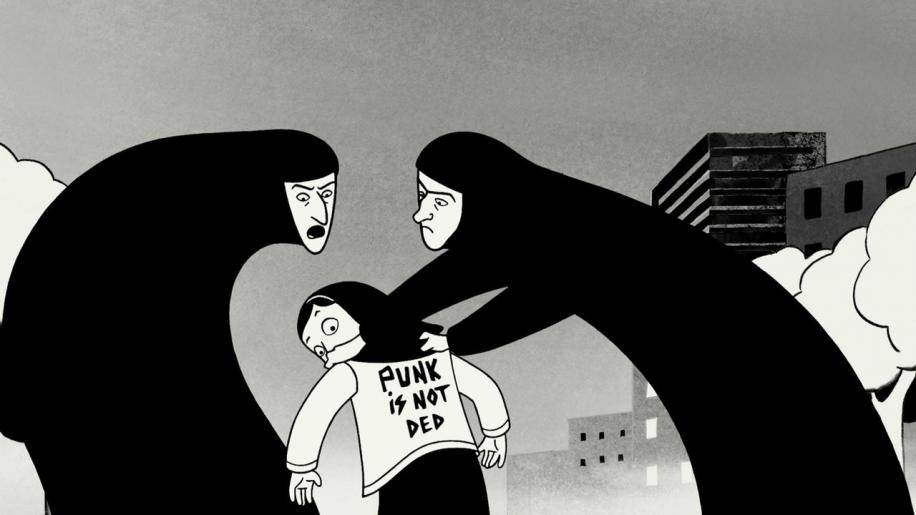 In the early part of this fledgling century Marjane Satrapi wrote her autobiographical work detailing her life as a young child in Iran during the final demise of the Shah, growing whilst the Islamic Revolution took hold and finally being moved by her parents abroad to complete her studies. It was a well received work, dark in tone and humour. In 2007 this was finally brought to the big screen, and no doubt harvesting more people to her incredible work. As she wrote the original graphic novel then so here she helps direct the animation so the work from page to screen is as clean as could really be expected.


The animation is stylised, predominantly black and white, bleak but never really depressing and all throughout I kept thinking it reminded me of some Eastern European work viewed from the 1970s; there's snippets in there you'll be able to relate to the style of Yellow Submarine and even some of the pencil works by Alistair Gray.

Marjane is a young child, idealistic, inquisitive and eager to learn about her family and her country. It's the time of the Islamic Revolution and the demise of the current and final Shah. Her parents are activists, communists who detest everything this current regime stands for; on learning of the revolution they are heartened, knowing that now things can only get better for them and for the general public. Marjane constantly listens to their conversations and takes an active interest in her uncle who was imprisoned by the Shah for his beliefs. As she grows she too starts to understand the history of her family, her country and the society she has lived in; she becomes a rebel, a punk, a young woman with her own mind and her own plans for the future.

It is with sadness then that when the revolution turns sour and women once more fall under the yoke of Islamic fundamentalism Marjane's parents realise it will be a difficult time for their outspoken daughter so they ship her away to Europe to allow her to finish her studies in peace. There though she finds herself a stranger in a strange land, can she return to the place of her birth and fit in to a society which goes against all of her beliefs ?

Persepolis is a coming of age story told though the eyes of the girl and woman she becomes; to understand that this is autobiographical in nature only adds to the feelings overflowing throughout this film. At the start we are given a brief potted recent history of Iran, from the brutal dictatorship of the Shah to the brutal dictatorship of the Islamic Revolutionary Guard. Marjane witnesses the imprisonment again of her uncle, the ensuing war between Iran and Iraq and the death of some of her friends. All of these episodes would shape anyone's life and Persepolis makes sure that this shaping is perfectly related to the viewer. These events give Marjane's character depth, character which is solidified by her own family's sense of duty and sense of right. It is understandable then that when she finally goes to live in the West she can hardly relate to the paper thin veil of its own self righteous gratification. What seems enjoyable to those around her in her new home falls upon Marjane's stoney ground because she knows and understands that there are ultimately more important things in life; family, liberty and freedom.

Persepolis though is not all about political ideology, it's about a young girl growing up and trying to live her life as she can despite what's going on around her. She recounts talks with her grandmother, puberty, her first loves and this is what we have all been through before and as such can immediately relate to. Anne Frank herself wrote of similar issues, issues again that we relate to and as such this makes you understand the character more, feel their joy and experience their pain. Like all young adults she finds new friends and new loves and again like all young people she eventually learns that these people are perhaps not the people she originally thought they would be; her brief love affair with one young man being viewed with different eyes after an adulterous affair is a joy to behold, not only shows what we all fall into with rose tinted spectacles but also the multi-layered nature of this incredible film.

At times the film becomes rather surreal as Marjane internalises her external struggles and tries to understand them, understand who she is, what her role in life is and why these atrocious events continually occur. To these ends she's often either quite literally, talking to God until of course she realises that he's as impotent as the others battling for survival in the real world. She's critical of the current Iranian regime and those people around her but she eventually becomes critical of herself as she realises that she perhaps has wasted part of her life; she understands that life is precious and that as you only have the one opportunity to live in this world then you better make the most of it whilst you can rather than pontificate over what cannot be achieved due to the fact that all existence is essentially meaningless.

It is the story telling which allows the viewer to completely immerse themselves in this film, to almost become a part of Marjane's family, to watch her as she matures, to suffer as she suffers and to finally feel pride at the decisions she eventually takes. The animation style suits the nature of the film perfectly, its tones are often dark in nature from the continuing brutal dictatorships ruining her country to the plastic and 2-dimensional characters she meets in exile. Black and white, shades of grey (as all decisions are in life) are the order of the day; colour would have detracted from the viewing experience, turning you away from the all important storyline to look at the animation itself. This is why Satrapi and co-collaborators chose hand animation for this feature; they could have produced it with computers no doubt in a shorter period of time but it would have been too clean, too perfect and detract from the story they wanted so much to tell.

They can be proud of the work they have accomplished, not only did they come away with the Jury Prize at Cannes (something which the Iranian government protested strongly against even before the film was shown), not only have shown some of the non newspaper reading public a brief summary of what happened in Iran the latter half of the 20th century but most importantly they have produced an enjoyable, riveting piece of work which is poignant, amusing, tearful and a truly engaging and enjoyable storyline. Get past the simple style of the animation, and you'll be rewarded with a film which should grace your collection, and offer repeated viewing, for many a long while. I really cannot recommend this highly enough.