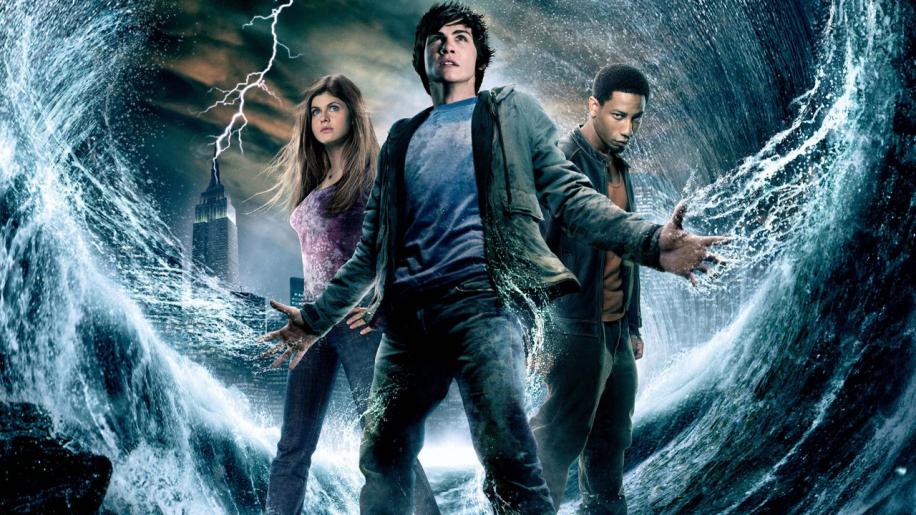 Imagine the scene in the 20th Century Fox Executive's office.

“Dis kid Harry Potter's pulling in da dough for Warners. We gotta get ourselves a slice of dat action. Get me a Harry Potter lookalike.”

A timid hand is raised, “Er, there are some books about a geeky kid called Percy Jackson we bought the movie rights to, a while back.”

“Great! Throw a few CGI effects at it and see if it's got legs!”

While watching 'Percy Jackson and the Lightning Thief' I had a very strong feeling that the above conversation actually took place. I'm not saying it's a bad movie. Far from it, I actually enjoyed the teen fantasy that blends Greek mythology with modern day America. It just reminded me of how other studios reacted to the success that James Bond brought to United Artists in the 1960's. Columbia produced the Matt Helm spy movie series while Fox offered the cinema going public 'Our Man Flint' and its sequels.
I'd fallen for the bait myself with 'Percy Jacko' as I'd enjoyed the Harry Potters so something in a similar vein was quite welcome. At the back of my mind was the thought that it wouldn't be as well made as the HP films, but I needn't have worried. 'Percy Jackson ...' is an entertaining, fun teen romp with a good sense of humour that makes for great family viewing. The Greek mythology content isn't dull and it won't be strange to modern day audiences either as they'll recognise much of it from 'Clash of the Titans'. The plot is clearly explained by the characters along the way, just in case it's too taxing on the brain for American audiences as they munch their way through buckets of popcorn. The undoubted highlight of the movie just has to be Uma Thurman with a headful of snakes as Medusa. Pierce Brosnan also turns up as a Centaur (half man, half horse) which is almost as amusing as his performance in 'Mamma Mia'. Steve Coogan turns up as a fairly non threatening Hades towards the end and the accent is definitely on comedy at this point. Well, it didn't cause me to hide behind the sofa.

To ensure some kind of guarantee of quality, Chris Columbus was hauled in to direct the piece as he'd already helmed the first of the Harry Potter series and he does a pretty good job.
The young lad given the lead role, Logan Lerman, acquits himself fairly well in the acting stakes although he often falls back on the 'I don't understand and therefore you must be mad' look that many teens emulate when confronted with something new or with which they don't agree.
The guy who really steals the show, however, just has to be Grover (Brandon T. Jackson) who has been assigned as Percy's protector. He's revealed to be half man, half goat and there's quite a bit of humour in his dialogue, somewhat reminiscent of the Donkey in 'Shrek'.
The love interest is provided by Alexandra Daddario as Annabeth, daughter of Athena, who's a rather pneumatic young lady with great big eyes that the camera loves. She's also a feisty babe in the mould of 'Xena -Warrior Princess' who provides a good foil for Percy.

The plot (oops - nearly forgot) has someone stealing a lightning bolt (the clue is in the title) belonging to Zeus, who is understandably hacked off about it. Well, you would be - wouldn't you? Someone nicks the most powerful weapon in the world from right under your nose and you'd be seriously narked for not having forked out for a better alarm system.
Despite being head of the Gods, our Zeus wants it back and if he doesn't get it then there's going to be war among the Athenians. Young demigod (son of Poseidon but he doesn't know it) Percy Jackson has been fingered for the crime so it's up to him to prove his own innocence - which includes going to the underworld and braving all sorts of danger. Along the way he learns who his father is and after being attacked by a winged creature called a Fury, he's taken to a training camp for young Demigods. As the place is crawling with kids, you get the idea that the Gods have been busy during their shore leave with the mortals and that their favourite pastime isn't playing chess after all.

In general the CGI used to breathe life into the various mythological creatures is good enough taken in context. Maybe I'm getting old, but CGI looks like CGI to me these days. Bring back Ray Harryhausen is what I say. We can live with his grainy process shots as they had a certain charm about them. All the same, I should imagine that a young teenage audience will be perfectly happy with the effects in 'Percy Jacko'.


The movie holds together well and at no point did I feel bored. The pacing was good with the bumps at strategic points to spike the interest and the comedy helped fill in the gaps between. It had the feeling of a Summer blockbuster about it and I have no doubt that it will play well to families on Blu-ray and DVD. It's not mentally challenging at all and there's plenty of spectacle to behold. When there's no spectacle, there's plenty of fighting. What more could you want?
It's all about expectations and if you settle down to watch this movie looking for something high brow (in which case, what planet are you living on?) then you're clearly going to be disappointed.

I have to admit that I haven't read Rick Riordan's books, upon which the movie is based so can't really compare. All I know is that a movie is never anything like the book and that a writer is about as popular on a film set as a fart in a spacesuit - so, of course there are going to be differences.
Just sit back and relax while the cast of 'Percy Jackson & the Lightning Thief' keep everyone entertained.
It's a fun movie for the whole family.