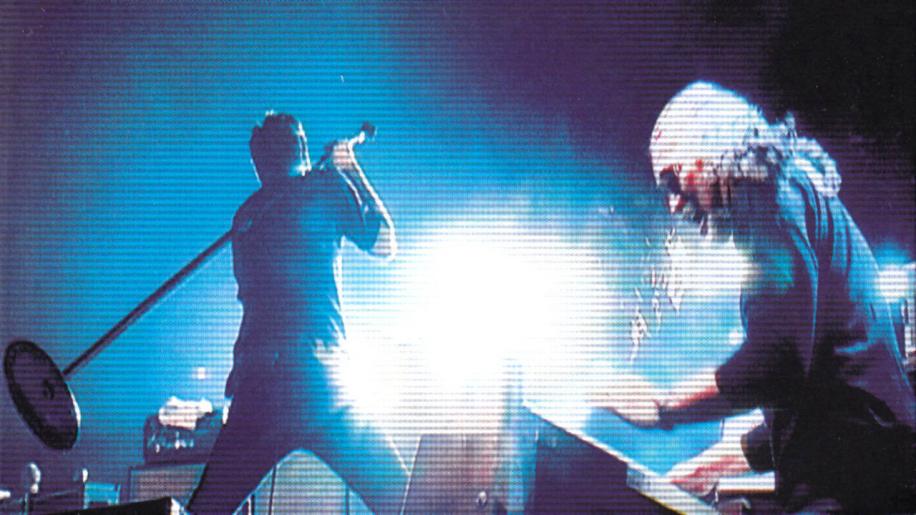 Despite the fact that the release of this Live At The Garden set is in the form of a twin DVD digipack it is, I regret to say, quite apparent from the very outset that the picture is quite poor and does not live up to the quality suggested by the rather distinctive packaging. The image is often noisy, soft and frequently out of focus; edges are anything but sharp and with certain combinations of lighting, which occurs often, we see areas of pixelisation or blocking. These same lighting conditions seem to be the cause of another unwanted effect - a thick halo of light surrounding band members. Colours also look a little washed out and dull and to round things off horizontal scan lines are evident pretty much throughout. There were times, however, when the picture looked quite passable - usually when Ed Vedder, Pearl Jam's lead singer, was brightly illuminated from the front by one of the many spotlights- this is a rare occurrence, though, as coloured spots from above and behind usually light the stage.

To sum up - watching this DVD took me back to times past when VHS ruled the video roost. 'Nuff said. It's as well that things can only get better, and thankfully they do! There are two audio tracks from which to choose - 448 Kbps. Dolby Digital 5.1 and PCM stereo, which is the default track. I listened to both and whilst the Dolby Digital track opens out the soundstage, lending itself to that live show experience it is the PCM track that has a slightly warmer sound, with bass tones especially seeming a little more integrated and for these reasons I prefer the stereo track.

The only really negative thing I have to say about the audio quality regards Ed Vedder's vocals. There are times when I really struggled to understand what he was singing - eventually I realised that this had nothing to do with the recording process and was merely the singer's slurred voice! I suspect Pearl Jam followers will understand my meaning. As far as extras are concerned we are treated to a total of six more tracks from the Pearl Jam repertoire including Dead Man, which sees Ed Vedder singing solo and playing guitar as a thank-you to the fans that have arrived early for a show and is recorded in Linear PCM only.

There is also a Matt-Cam segment. Here we have a video camera permanently on drummer Matt Cameron for a total of five tracks taken from the main live performance. If you're interested in seeing a man pull some interesting faces whilst “working out”, then this feature is for you! The picture quality in this DVD is so poor it had me checking and re-checking my settings just to make sure I hadn't done anything silly. Alas my setup was as it should be and the image truly is as bad as I've suggested. However, there are some positives to go with what is a rather large negative. The main positive is the band itself - they have a strange kind of charisma. It's as though they do what they do and want you to like it or lump it! And somehow I found myself liking it. There's a point in the show when the band leave the stage, then return for an encore. It seems that they were afraid that the stage was about to collapse. Apparently Pearl Jam are one of an elite few, Bruce Springsteen is amongst them, whose fans have caused the stage in Madison Square Gardens to shake! It is this energy that somehow comes across in this DVD and, along with good audio, goes some way in saving the day.

Can I recommend this as a worthwhile purchase? Ultimately my answer would be yes, but it would help if you really do not care about image quality.