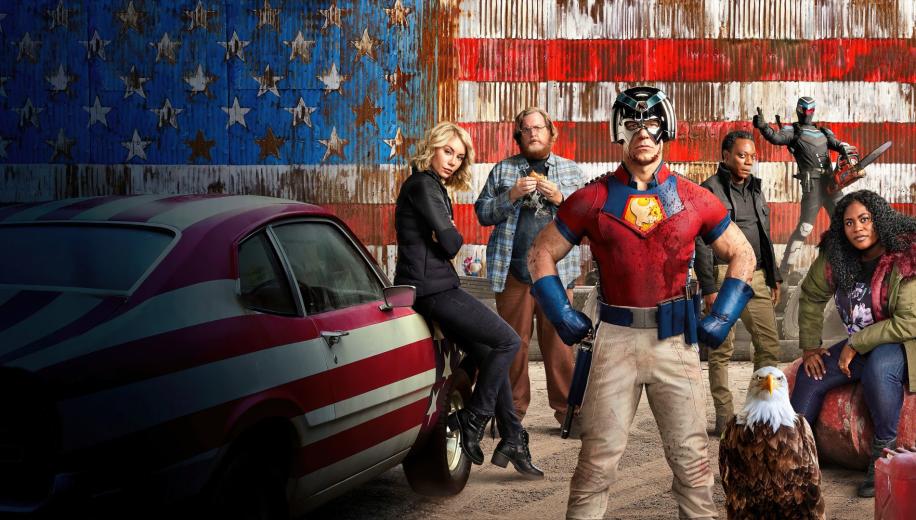 The TV spin-off nobody expected, from the soft reboot sequel nobody asked for, Peacemaker is one of the best new shows you may or may not get around to seeing in January (EDIT - but which has finally landed in the UK in March!)

James Gunn's very public 'separation period' from Disney/Marvel resulted in an interesting twist. DC got good. Gunn's celebrated Guardians of the Galaxy humour worked particularly well unleashed in a DC R-rated environment, with his spin on The Suicide Squad somehow doing justice to many of the same characters wasted in previous movies (Margot Robbie's Harley Quinn finally got to shine), whilst introducing a couple of hilarious new ones, not least - unexpectedly - John Cena's Peacemaker. Cena hardly acquitted himself well in Fast and Furious 9, somehow making Vin Diesel look good by comparison, turning in a tone-deaf performance that didn't bode well for a career trajectory that presumably he hoped would go similarly to fellow natural-born-wrestler, Dave Bautista. Yet in The Suicide Squad he finally found his Drax moment, often stealing the show, and in Peacemaker he basically is the show, and it's a bloody, crazy, R-rated hoot.

... this is a James Gunn production, through and through, right from one of the greatest credits sequence of any TV show ever

Peacemaker is back! Confused that he's not quite regarded as the world-saving hero that his fellow Suicide Squad are, his newfound freedom is short-lived, quickly drawn back in to the wider Suicide Squad fold, as a few exiles from Amanda Waller's team confront him with a new mission, one which is going to require... a new helmet, and him reclaiming his pet eagle.

Peacemaker is the only show you will ever watch where an eagle hugs a grown man and it's played both for obvious laughs but also, less obviously, for genuine emotion. Suffice to say, this is a James Gunn production, through and through, right from one of the greatest opening credits sequence of any TV show ever, through to the fabulous soundtrack, and seemingly perfect blend of really very patent and sometimes slapstick humour, with somewhat 'serious' narrative beats. It's a balance which not everybody can get right (evidenced by the recent Eternals) but that Gunn appears to do with ease, at once utterly sending up the superhero vigilante genre, whilst also telling a pretty damn compelling and thoroughly entertaining superhero vigilante tale. Gunn deftly shifts from solid action to farce to witty banter back to action in a heartbeat, often throwing all three into the mix with delirious results (Peacemaker's tighty-whitie fight is pretty hardcore, to the point where you almost forget just how ridiculous he looks).

They've also done some brilliant work with Cena's character, who really wasn't all that easy to get behind - ultimately - in The Suicide Squad, despite being hilarious, but who, come the end of the second episode, is actually a fabulous protagonist. Yes, he's an idiot, yes, everybody knows he's an idiot, but he's actually got Drax-levels of humour going on here, and the positing of him having a white supremacist dad (a fabulous turn from Robert "Terminator 2" Patrick) makes Peacemaker a much more tolerable, if not even occasionally lovable, dolt, with Cena leaning right into the massively OTT character and pulling off possibly his best role to date (not a high bar, but still noteworthy). The supporting cast are no slouches either, a lovable bunch of rogues, from Orange is the New Black's Danielle Brooks to returning The Suicide Squad bit players Jennifer Holland and Steve Agee, who are both great opposite Cena, with pretty-much everybody perpetually blindsided by just how much of a relentlessly oblivious moron Peacemaker is, yet also strangely compelled by his almost otherworldly idiocy.

The integration with the wider DCEU is largely tangential. Sure, they give you a quick recap on the events of The Suicide Squad, and a fun little moment with a hospital janitor addresses a few questions you might have for where they go from here, but this is largely solo territory (thus far), however Gunn's clearly always got his eyes on the prize, adding in a few sweet references here and there (a Wayne stamp, Blackgate prison, and a fabulous line about Bat-Mite), but keeping Peacemaker in his own microcosm of this universe, still dealing with crazy super foes, black ops missions and mad conspiracies, but also finding time to kick around the woods with his best mate blowing each other up (literally) for kicks. There are many, many scenes that just should not work. A hug from an eagle. A succession of painful falls from balconies. Hell, a ridiculous dance in your tight white pants. And that intro. Gunn and Cena master them all, giving us a 'hero' that nobody needed, that nobody asked for, but that many may suddenly find themselves very interested in.

EDIT - Now finally released in the UK, in full!

Well, that was an absolute blast, Peacemaker not only getting better as it went along, but closing out the season with one of the best finale episodes in a long time.

This is absolutely Cena’s baby, and it’s not surprising that people want to applaud him for it. Although the Awards talk seems admittedly unlikely, it’s not really hyperbole - there’s a lot of talent on show here, and he manages to transform this degenerate redneck-esque idiot of a character, a villain, into a sympathetic, well-rounded individual who has a backstory, considered psychological issues, a well-developed family/childhood arc, and even unresolved echoes from the events of The Suicide Squad. Come the end of this season you are absolutely rooting for him and, as already mention, it’s amazing just how Gunn and Cena can make shots like a hug with an Eagle just so… right. He’s not the only one either, as all of the core characters have their moments of vulnerability, and their moments to shine, each having a particularly kick-ass scene (from the chainsaw to the John Woo esque gunplay) which knocks you sideways and reminds you of the absolute wow factor that Gunn is adept at deploying.

The writing is superb, enjoying the lengthy seemingly improvisational riffs in the moment (Peacemaker and Vigilante can steal any scene), but also playing the long game, with the ongoing Aquaman/Justice League jokes given an utterly fantastic payoff. And the scale gets deceptively big budget on occasion, really sitting comfortably alongside its cinematic parent, with a tremendous - typically Gunn-esque - score to maintain that fabulous style.

It may only be late March, but the sun is shining, and it's hard not to reflect on Peacemaker as one of the best shows of the year so far, which is surely something that nobody expected

HBO Max presents Peacemaker in the US, and it is available in the UK in full from 22nd March 2022 on Sky.