Everybody be cool, this is a robbery! 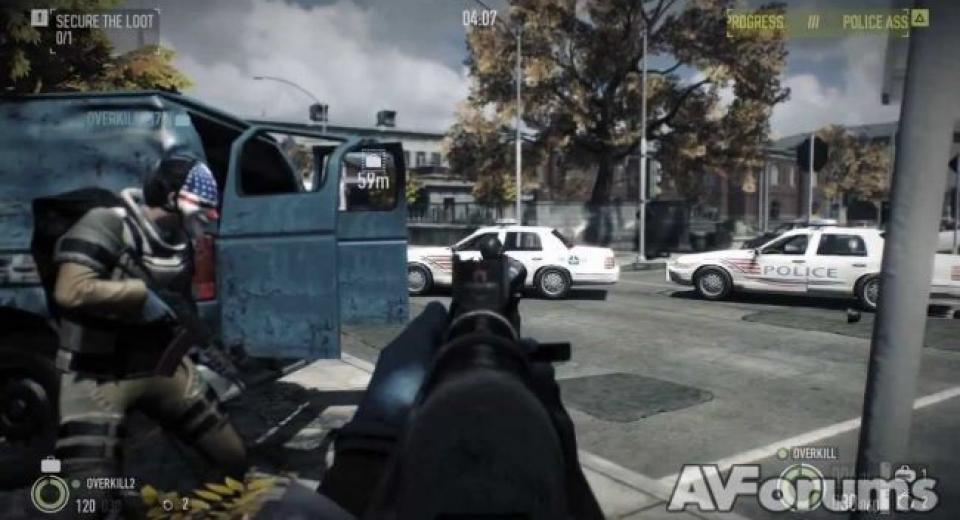 Co-op has blown up in a big way this generation, with high speed Internet connections and voice communication making it possible for meaningful multiplayer experiences that go beyond the usual adversarial death matches. Payday 2 attempts carry the mantle of the more thoughtful coop shooter; pitching itself somewhere between Left 4 Dead and Rainbow Six. Throwing you and three masked associates into the world of organised theft where you visit banks and make deposits of bullets in return for some sizeable cash withdrawals. It's a quick and dirty introduction as you're kicked out of a van and into your safe house where you get a quick tour of Grand Theft 101; which includes opening doors in a variety of ways, firing weapons and admiring your growing scrooge McDuckesque pile of cash. Once the whistle stop tour is complete you get dumped into CRIME.NET which serves as your hub of connectivity to the criminal underworld. It is essentially a server browser wrapped in the graphical representation of a map which shows in real time all the joinable heists and activities currently available, how much cash is on offer and how many participants are are ready and waiting.

I'll pause here for a second and mention it is entirely possible to play this game in single player, there is a separate CRIME.NET offline where the same map and missions are available for solo play. However if that is how you intend on playing Payday 2 turn back now. Besides the fact that the terrible AI prompted me to quit out before I had even completed my first heist due to the usual incompetence that cooperative AI is well known for, this game is made for playing with real people. If you have to; spin the wheel and hope you find a good lobby of randoms who aren't trigger happy maniacs and can maintain a semblance of teamwork, ideally though you want 3 good friends communicating and working together which elevates the gameplay on offer to a completely different level of enjoyment.

There are several different types of jobs which vary in both objectives and length, some will be quick and easy like "Mallcrasher" which asks you to enter a shopping mall and wreak $50,000 worth of havoc before making your escape, its a one day job which save for a few side objectives is relatively easy to accomplish. Others like "Firestarter" are set out into different stages (or "days) where you must steal a weapons cache, break into a server room and then finally hold up a bank, with each day having multiple stages and objectives to complete in a variety of ways. Each time you complete a job you gain experience and cash to improve your skills and load out. There are 4 skill tress to progress through which make up four distinct classes. The Mastermind is the charismatic leader whose main ability allows them to drop a doctor bag letting players to patch themselves up mid combat and regain health, further up the tree they can intimidate certain enemies and even convert them to fight on their behalf. The Enforcer is the thug of the bunch whose core perk lets them drop an ammo bag for players to resupply from and with enough points can eventually don the heaviest armour in the game and gain all sorts of damage bonuses to their weapons. The Technician is the thinker of the bunch whose basic skill gives them access to trip mines, and later obtains deployable sentry guns and more efficient drills. Finally The Ghost is the master of stealth whose ECM jammer can disable electronic devices such as Cameras, phones and alarms for a short period and with enough work they can eventually crack the safe by hand and disable enemies with their upgraded ECM jammer.

All of the skill trees are deep and will take both a lot of skill points and cash to unlock, you can re-spec at any time gaining all your points back and some cash if you wish to take a different path. In the early days you are likely to pick a class and stick with it to Min/Max and try and grab some of the top tier abilities, if you have a good group of online cohorts then you should coordinate quickly and establish who takes what role for an even distribution of skills.

The inventory allows to to purchase and upgrade your hardware, all the predictable options are present with pistols, rifles and shotguns on offer, attachments are made available through an interesting wildcard mechanic. After a successful job you will pick from three cards which are then turned over to reveal instant bonuses such as new masks, extra cash or weapon unlocks. It's a smart move as the weapons are sufficiently hard to obtain due to the high prices and the cash based nature of the upgrade process, having the distribution random means you have no choice but to brute force the system by playing a lot of missions and hoping you get gifted that scope you have been waiting for.

The gunplay also leans into the system with solid handling which begs to be augmented, the weapons feel good by default but adding sights, stocks and silencers make them far more effective to use ensuring you keep you eyes peeled on those wildcards when they turn over. The missions have been built with this need for replayability in mind although there are only 12 "heists" available out of the box; there is a possibility for a great deal of variation. The layout of buildings is randomised so the safe might not be where it was last time, guards and cameras may be in different positions of not present at all. Your performance in one part of the job might change elements that occur later, Hitting a target with over whelming force might make later stages harder as the police response escalates all the way up to riot shielded squads of SWAT teams and snipers, even adding extra days onto the job as you deal with consequences of your actions, that three day job might stretch out to seven.

The system goes quite deep with all sorts of mechanics fleshing out the experience. The loot will often come in bags which slow you down and can only be carried one at a time. Leading to a fun risk and reward game of running through a hail of gunfire to grab the rest of the loot or shouting "WE HAVE TO GO!" as your teammate tries to pick the lock of one too many safety deposit boxes while the police assault from all angles. The tension is also ratcheted up by dynamic music which is timed with the police waves adding in an extra layer of cool. Hostages can be tied up and eventually used to trade for team members in "custody" (a sort of holding state players go into if they are revived once down), stealth can be achieved by intimidating and controlling civilians into not raising the alarm and pagers which alert the cops can be answered to delay the police response.

Predictably though online when playing in public lobbies a lot of the finer elements of the experience are immediately bypassed, most missions start in a "casing" stage where you can tentatively wander the map without your mask on and check out the location see how much security there is and discover the location of your objectives before screaming quotes from your favourite heist movie and spraying automatic gun fire into the air. Online this preparation rarely happens as players almost never take the stealthy route and opt for guns blazing most of the time. Some of this can be attributed to the lack of any real tutorial or direction at the outset, players are left to discover the less obvious elements of the experience which go beyond shooting everything that moves. Which is a shame as the stealth gameplay is perhaps the most rewarding, conducting a heist where almost no one knows you were there but you made off with all the swag is a rewarding accomplishment which few in public lobbies will ever accomplish.

PayDay 2 is a simple but surprisingly deep game, it's most glaring flaw is that you will only get out of it what you put in, you will need to use trial and error to initially feel out the mechanics as there is little introduction to how the game actually works. You're required to either constantly search through lobbies for like minded participants or have a co-op crew ready to roll for the best experience and you must be willing to experiment within the skill trees to find the most rewarding elements within the stealth mechanics. This may seem like a restrictive amount of requirements for admission but they open the door to some incredibly fun sessions which always turn out to be so much more than the established wave based survival modes which now exist as standard in almost every shooter.

It's pretty refreshing to see them eschew story in favour of multistage heists wrapped in the thinnest of narratives; which only serves to facilitate the emergent gameplay produced by the dynamic scenarios and the class based cooperation. It allows for a reduced price tag and leads to some incredibly fun situations are which a ripped out of the coolest pages of the Hollywood action manual and will have you swapping stories and strategies the morning after.