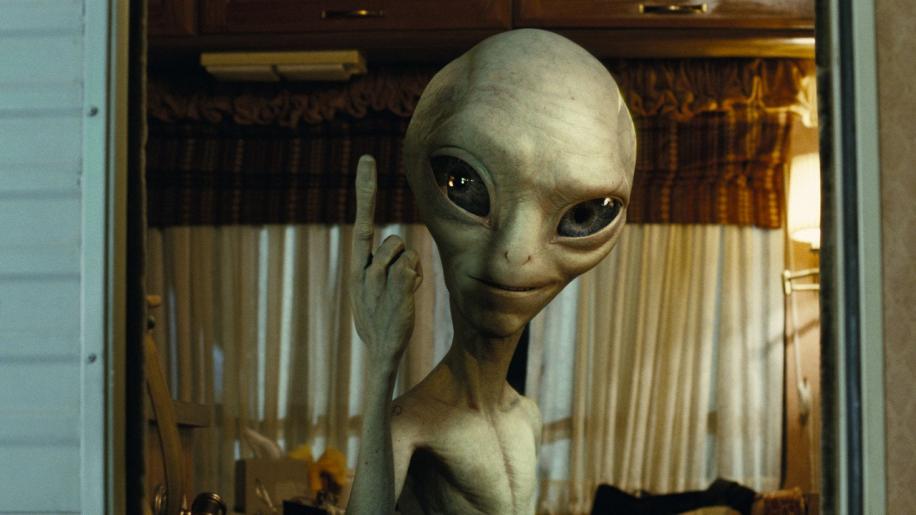 Okay, so we’ve taken the mick out of Zombie movies and buddy cop films – what are we gonna do next? I know, let’s rip the petrol out of Sci-Fi flicks! Great Idea, let’s do it. You get the feeling that a conversation of this kind took place at the conception of ‘Paul’, the very recent Simon Pegg and Nick Frost extravaganza – now out on UK Region free Blu-ray. Having tickled the cinema going public’s funny bone with ‘Shaun of the Dead’ and ‘Hot Fuzz’, would it be too much to hope for a hat trick from the dynamic duo? There was added danger for them with ‘Paul’ in that, while their previous outings had been relatively modestly budgeted affairs, their new picture was on a proper Hollywood scale. Would this take the edge off things and would too many cooks (studio interference) spoil the broth?

Having seen the movie now, I’m happy to report that ‘Paul’ put a smile on my face for most of the running time and provided laugh out loud moments for the rest. I’m really glad that it did, for it seemed to appear in UK cinemas then vanish almost as quickly – which didn’t bode well for a Blu-ray release.

So what’s the story here? Two Sci-Fi geeks, Graeme Willy (Simon Pegg) and the writer Clive Gollings (Nick Frost) are having the holiday of a lifetime (as they see it) by taking a road trip across America in an RV (that’s a motor home to us Brits) following a trail of UFO spotters milestones including the legendary Area 51 and Roswell. Naturally, they have to start out at the Comicon show in San Diego where they’re surrounded by Princess Leias, robots, ewoks – and there’s even Twiki (Be-de-be-de-be-de) from ‘Buck Rogers in the 25th Century’ on hand to gladden their hearts. The comedy tone is set as they ignore the nubile nymphettes in skimpy costumes and instead eye up a midget dressed as an ewok. Not only do Messrs Pegg and Frost affectionately send up the Sci-Fi genre here, they’re also unafraid to send themselves up too. There’s a running gag where suggestions are made that they might be gay, as they share hotel rooms as well as an RV and the two guys just camp it up a little for laughs (at least, that’s what I think they were doing).

As they drive through the desert at night, the car in front suddenly goes out of control and rolls, bursting into flames. As our two heroes get out for a look, a laid back voice in the darkness asks them not to freak out and a big eyed alien smoking a cigarette steps into the light. Naturally one of them faints – I won’t say which one. The alien reveals himself to be Paul, so called because his spaceship crashed on top of a dog by that name and it’s kind of stuck as a nickname. So he’s been hanging out with the military for about 60 years but has decided to go AWOL and find his way back home before they cut open his brain. Paul has a very droll sense of humour and we discover that the stereotypical image we humans have of an alien has been caused by us being drip fed pictures of him, so we won’t freak out when we do eventually meet them. He also cracks jokes about eating humans and rectal examination before telling his hosts that he’s just kidding.

You actually forget that Paul is a CGI animation as his delivery is so cool and normal. He’s voiced by Seth Rogen (so awful in ‘The Green Hornet') who was also used to almost rotoscope the movements for our alien friend. As you don’t actually have to see Seth, he’s very good here. It’s also the fact that his dialogue is so funny, as he debunks many misunderstandings we have about visitors from another planet. Paul is being pursued by an Agency man called Zoil played by Jason Bateman (‘Smokin’ Aces’) who reports to his controlling boss back at HQ by phone. I’m not going to reveal the identity of the person playing his boss as it would spoil a good laugh.

Along the way, our gang of three pull into an overnight RV park and meet Ruth (Kristen Wiig), a fundamentalist Christian with a deformed eye and a loony father. She joins the gang in their bid to help Paul get home and along the way our alien friend can’t stand her religious ravings any longer, so he shares his knowledge of the creation of the universe via a ‘mind meld’ with her. Ruth, her faith shaken, now decides to make up for a lifetime of not swearing or fornicating with immediate effect. It was around about this point that I suspected our two stars/scriptwriters had decided to try and gain some free publicity for the film by attempting to offend religious groups. Ricky Gervais tried this too with his ‘The Invention of Lying’, but said religious groups seem to have learnt through harsh experience not to take the bait so readily.

Kristen Wiig is very funny here as she tries out a succession of new swear words, not necessarily in the right place or in the right order – and suddenly gropes Simon Pegg in the middle of the highway. I’m willing to put money on him having demanded the inclusion of that scene. There are many references to ‘Star Wars’, ‘Star Trek’ and a whole host of other Sci-Fi movies that true geeks or Trekkers will delight in spotting.

At the centre of the piece – and what really makes it all work – is the good on screen relationship between Simon Pegg and Nick Frost. They are so very natural in their roles as Sci-Fi geeks that you can’t imagine them being anything else in real life – unless they’re very good actors. The film has a real warmth to it and doesn’t go too far in ‘pushing the envelope’ with bad taste jokes. This makes it stand out from many recent ‘comedies’ that have large arrows pointing to the jokes that just don’t work. The difference is that this movie is genuinely funny and the whole experience is hugely enjoyable. Watch it soon.