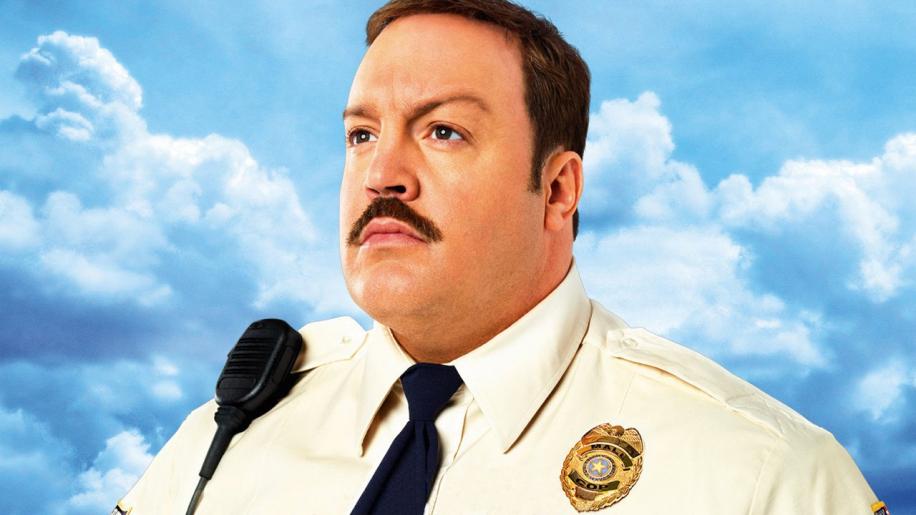 Kevin James, undoubted star of Paul Blart: Mall Cop has carved out a nice enough little niche for himself as both a stand up comedian and some American television work. It's natural then that he would try and break into Hollywood, and to these ends wrote his own movie vehicle. The vehicle though comes across more of a Sinclair C5 rather than the Lamborghini that he was probably hoping for. Now I think it's fair to say that he knows his own limitations, and from the outset knew what he was making would never enter any award categories. It's also fair to say that really this film is not directed towards the likes of me, but a younger audience perhaps and even then I think it might be pushing it.

Paul Blart is an overweight, emotionally lonely security guard at the local shopping mall. He parades through his turf on his Segway Personal Transport, keeping order amongst the shoppers, chastising the oldies speeding on their motorised buggies and admiring the owner of a small stall selling hair extensions.

All is more or less fine, he has a good family consisting of his daughter and mother, and he enjoys his job; even though on an annual basis he applies to be State Trooper. However not only does he suffer from hypoglycaemia but he's looking to find the woman of his dreams. It's just before Christmas, and he thinks he has a chance with the beautiful Amy (Jayma Mays) but his mall is about to be invaded and taken over by ruthless criminals intent of bleeding the credit card system dry.

So it's Christmas, there's a large building, the bad guys take it over and hold a number of shoppers and store owners hostage whilst one man is left alone to try and put things right. Sound's like Die Hard, well of course it does; it stands out a veritable mile. All credit where it is due though Kevin James does admit that he wanted to try and emulate that look and feel but in a more gentile comedy scenario. It's easy enough to say though that he really didn't hit it off for this reviewer.

That's not to say that Kevin's talents have been wasted, oh no: Paul Blart: Mall Cop cost a reported $25 million to make. On hearing that I wondered how much money it had actually recouped. Amazingly enough it took a whopping $31 million in its opening weekend, so that's that covered. To date it has made the investors almost $150 million and that of course is not to be scoffed at. So there's a market out there for Kevin James, his alter ego Paul Blart and if that's the case then we can regularly expect “Paul Blart 2: Shop Harder” and “Paul Blart 3: Vengeance of the Segway”. In all honesty I can't say I'm looking forward to the prospect.

The film is derivative not only of Die Hard but of many other middle of the road, upset no one, gentile comedies that we see far too much of these days. Most, if not all, of these films have no soul and Mall Cop is no exception; there's no invention, nothing to make you sit up and take notice, nothing new. Like a manufactured boy band from a reality TV program this has one purpose and one purpose only; not to make an audience fall over with laughter but to make money. Yes the studios have to get a return on their investment, but that return should not be the be all and end all of movie making.

As our main man, Paul Blart, is overweight we get the usual fatty jokes, even going as far as Paul taking on another overweight person in a lingerie shop. The slapstick comes thick and fast from the punches thrown, the drunken antics in the bar, driving into the back of a car, or falling down asleep. I love slapstick, grew up on it and have a lot of regard for the time in which it was at its height. These days though comedy is a little more subtle, a little more inventive, and slapstick should be left where it really belongs... in the sub 12yr old section of your favourite Blu-ray rental store.

The bad guys are something else; there's no hint of any real meanness, no hint of any danger and nothing there which gives the viewer any taste of apprehension or concern for the people held hostage. I mean what are they going to do, run them over with their BMX bikes or skateboards? So this was another failing for me, I just couldn't take the villains seriously at all. 40yr old guys prancing about on boards and bikes do not really make a menacing troupe in my eyes. Mind you make them 14, place them in the local underpass and it's a different matter!

Granted the performers which stunt co-ordinator Chris O'Hara managed to pull together for this venture know their stuff, they skate well, know how to swing those bikes around a shopping mall, and the machinations of free-runners Victor Lopez and Natascha Hopkins really have to be admired. In a similar way Kevin James gains plus points not only for starring in this film but for writing, manoeuvring a Segway in ways I never realised were possible and doing most of his own stunts. It's a shame then that in this case the whole is not greater than the sum of the individual parts.

Watch it with younger members of your family and you'll gain some enjoyment from it. Tucked away in a darkened room with only myself and a cup of coffee for company I desperately wanted this to end rather quickly. Only then did I realise that I had to sit though it again, listen to the commentary and if anything that's worse than those final few shopping days before Christmas!