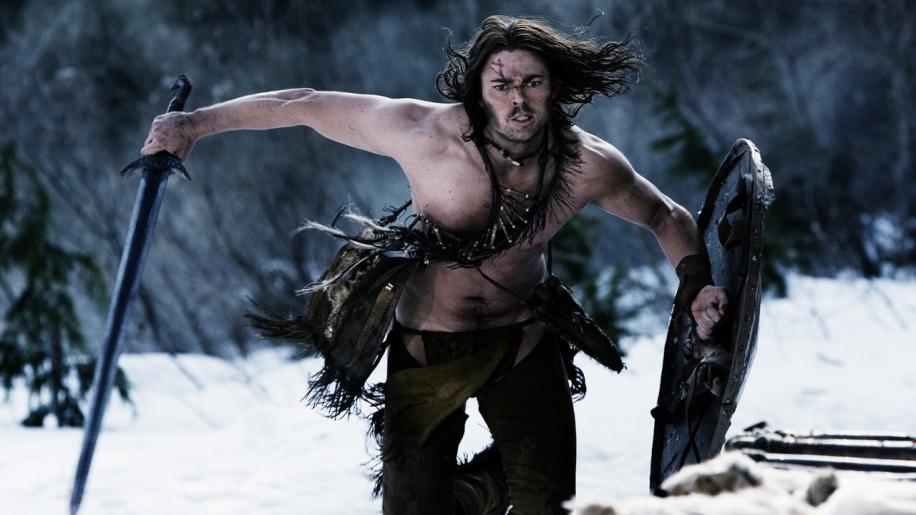 It's obvious these days that Christopher Columbus, the explorer not the director, wasn't the first to 'discover' the Americas. The indigenous inhabitants would, quite rightly, argue that it really didn't need discovering as they were already there. Popular opinion now though is that hundreds of years before the Spanish landed on those shores the earlier, more northerly, Vikings ventured up towards Iceland, down through Greenland and arrived on American soil by the top route.

No film has really ventured into these murky waters so it was pleasing to see someone at least take a stab. Adapted by Nils Gaup from his earlier, award winning, directorial debut Ofelas and with previous Texas Chainsaw remake director Marcus Nispel at the helm steering the likes of Karl Urban (Eomer from Lord of the Rings and soon to play 'Bones' in the next Star Trek movie), Russell Means (Last of the Mohicans), Ralf Moeller (Gladiator), and last but always by no means least, Clancy Brown (Highlander, Shawshank, Troopers) on paper it looks like a good couple of hours, so how does it actually pan out?

Starting we have a huge Viking longboat, run aground, found by a wandering squaw. The occupants nowhere to be seen presumed dead like the rest of the chained slaves. One young boy appears though, shaking and obviously afraid; he's far to young and or weak to hold a mighty sword to defend himself. This young man is 'adopted' by the Indian tribe and the woman who found him, naming him Ghost due to the colour of his skin and hair. Ghost grows into a fine young man, but it still to be accepted by the elders as a true Indian warrior. On a hunt to prove his worth his village is sacked by invading Norsemen, most of his tribe is slaughtered and Ghost returns to avenge the deaths of his tribe, to prove his metal, to become a brave.

Take a sprinkling of Last of the Mohicans, a dash of Braveheart, a pinch of Rambo; sprinkle with Conan, bake for a few months and you just might get what's up on screen here. As I say on the face of it this looks as though it could be an interesting enough film, alas it fails really to live up to expectation. The direction leans too much towards the music videos which Nispel found his footings in. The shots come in quick and fast, never lingering on any scene too long and not really exploring any of the characters or their relationships to each other in any great detail.

But then Pathfinder wasn't really about all of that; it's more about revenge, bloodlust and finding oneself; well perhaps not really the finding oneself. On a visceral level it's acceptable enough with plenty of action scenes for those people who enjoy that use of their time. It also takes too many cues from too many other films, most of which are mentioned by name in the associated commentary. Now I feel it's fine to be inspired by other peoples work but to extract whole scenes or recount dialogue verbatim smacks to me of an artist still struggling to find his own way; but with a middle of the road remake of Texas Chainsaw and an up and coming remake of Friday the 13th it seems that he might still be wary of going it alone on a solo project, perhaps his Alice might prove his worth.

The acting is never engaging, not really producing characters that grab the viewers attention or emotions. Clancy Brown and Ralf Moeller are in there as Vikings but heavy use of make-up, beards and armour essentially disguise who they are for most of the time. Karl Urban doesn't portray his loss with any degree of emotion, playing more of a ghost than his character name suggests. Certainly he's not up to the standards he set himself in LOTR, but there he had a good enough director at his back pushing him and everyone else onwards. Russell Means plays a wise old pathfinder about to relinquish his role onto a newer generation and he walks though the part. Obviously cast to add gravitas to the piece, he could have performed this particular role with his eyes definitely wide shut. It's good to see him here though as he is an obvious welcome addition to the cast.

Although the cinematography is at times picturesque, deep and wide it's unfortunate that most of the time it's shrouded in darkness. Nispel loving the dark brooding atmosphere of desaturated foggy woods with only piercing light beams ot guide the way. Although the almost perpetual darkness does add a sombre mood to the production as a whole, I felt that it detracted from some of the scenes in so far that for a lot of the time it's difficult to see what's going on. A combination of fast edits, quick action and murky filming/production doesn't really lend itself to best visual impact.