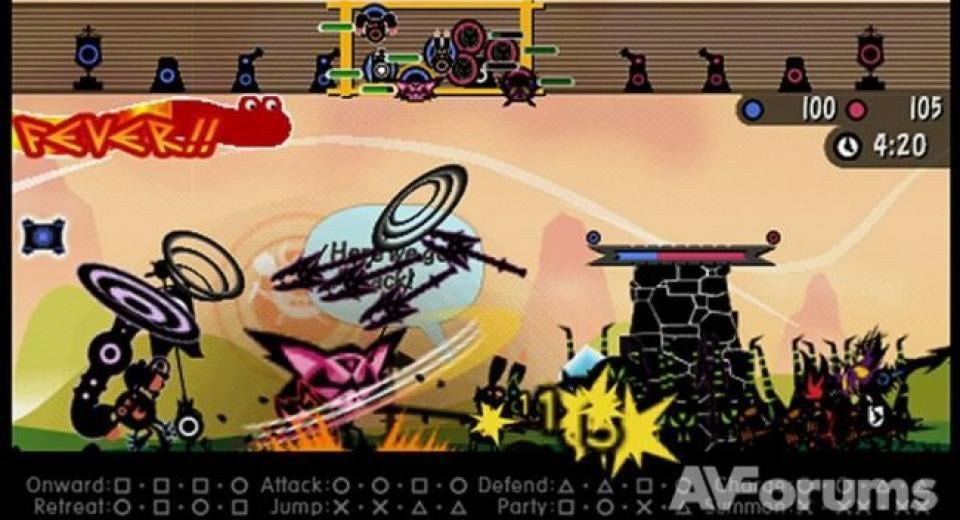 It’s not often one game can be described as both "rhythm-based" and “role playing”, but it’s true of Patapon. For anyone not familiar with the franchise, you lead the eponymous race of silhouetted figures into battle by tapping out rhythms on the PSP's face buttons. Each button corresponds to a drum, with particular combinations commanding a variety of actions.

Patapon 1 was well received by critics and fans alike. The unique nature of the control system combined with a striking soundtrack and fun visuals stood the PSP exclusive apart from the pack. And despite the fact the sequel used almost the same formula, Pyramid / Japan Studio bolstered the campaign well enough to garner similar praise.

Approaching the third entry into the series, the developers once again had to face the challenge of reinvigorating a franchise for which success had stemmed from its novel mechanic. To this end, Patapon 3 seeks to differentiate itself from its predecessors by significantly reducing the number of Patapons you control, by enhancing the RPG elements and offering a range of Multiplayer options.

How well-implemented those developments are judged to be will dictate the success or otherwise of Patapon 3. Distinctively, foreground characters and objects are almost entirely silhouetted against cutsey, cartoony, colourful backgrounds. It's an eye-catching and engaging style that disposes you to like the game from the start.

But for a game focussing on rhythm and stats management, the most important aspects of presentation are the audio and the ease with which the player can navigate (and understand) the levelling / inventory screens.

Let's start with the good: The music and sound effects work really well and the better you perform in terms of your timing, the more the music builds, and this serves well to lock your attention into the game.

Where the game falls short, however, is in the menu systems, which can most flatteringly be described as convoluted, and more realistically be described as a total mess. An issue for any game that's trying to tick the RPG box in the genre list.

It’s a real shame and draws a stark dichotomy between the in-game action and the other aspects of the game. Unfortunately, inventory and stat management are crucial to your progress so confronting the messy menu screens is unavoidable. As mentioned, your small Patapon tribe is controlled entirely by tapping out rhythms on the PSP’s face buttons. Specifically, each button is mapped to a particular sound - PATA, PON, CHAKA and DON. Defined four-beat combinations of these drums instruct your Patapons to perform an action, and they will chant the command back as they do so. Each action therefore effectively takes eight beats from start to finish.

The border of the screen pulses metronome-style throughout the game. If the timing of your beats is perfect the 'fever snake' will appear, making your tribe's actions extra potent.

Initially, there are seven commands you can give your Patapon tribe. Button inputs are always at the bottom of the screen, but thanks to the tutorials and in-action prompts you'll soon find the various combinations become automatic.
Combat, especially against larger enemies, is mostly a matter of recognising patterns, so you'll need to learn to use the right commands at the right time by looking at your foes’ cues. The game becomes extremely challenging later on, requiring you to pretty much nail every button press with no room for errors.

Patapon 3 employs an overly-complex levelling system from which few gamers will derive much satisfaction. Inventory management goes more or less unexplained, and when you throw in the upgrades and character classes the whole thing begins to feel like a bloated, poorly constructed mess. It's not a criticism of the depth of the game, it's a criticism of how the player is encouraged to plumb those depths. To thoroughly mix metaphors: they’ve thrown the kitchen sink at it, when all many players will have wanted was to bang a few saucepans.

All stages have a recommended level associated with them, and you'll need to take heed because attempting a level 6 mission with level 3 characters will not end well. This can lead to a lot of grinding, something which is especially frustrating as each character's classes must be levelled individually - in other words, if you switch class, you’re back to level 1.

The online multiplayer runs alongside the campaign, players can dip into others’ games to play co-operatively, and adds additional missions inaccessible in the single-player mode. Additionally, there are a number of adversarial modes available. Like many RPGs, Patapon 3’s single player will last as long as you're enthusiastic about grinding your characters up through the levels. Playing through as directly as reasonably possible, you can probably expect to get at least 25 hours out of the single-player campaign.

Multiplayer's longevity will depend very much on the strength of the community that forms around the product. The offering is solid though, and will no doubt appeal to long-standing fans of the franchise.

It's difficult to dislike the in-game action of Patapon 3. The music is fun and infectious. If anything, it can be a little too catchy - you’ll need zen-like skills to walk away from a session with the game without PATA-PATA-PATA-PON or PON-PON-PATA-PON echoing around your mind. But the well-judged soundtrack and distinctive visuals really make the game enjoyable, in many ways the action is as satisfying a casual experience as you’re likely to find.

Sadly, as a package, it is neither casual nor satisfying. The RPG element is complicated and poorly-explained, menu screens are a chore to navigate and to progress you will need to grind and farm your way through missions. For some this will most certainly appeal, but anyone hoping for more of a romp might find themselves bogged down in incomprehensible options and stats.

There is a sense that at the same time as trying to differentiate itself from its predecessors, this is a title trying harder than ever to show it doesn’t belong in the mobile marketplace. In-game action in Patapon 3 would work wonderfully on a phone (simple rhythm control means no need for thumbsticks, great audio, simple but effective graphics, etc), but the rest of the content wouldn’t carry over quite so well for the casual gamer. Unfortunately in the case of this title that line of argument doesn’t hold up; it’s the action itself that works and everything else that doesn’t. You can’t help but wonder how high this would have reached in the App Store / Android Marketplace charts, had a simplified take on the mechanic first found its place there.

If the customisation, classes and levelling had been implemented more successfully Patapon 3 could have cemented itself as a PSP classic. As it stands it’s an extremely creative, fun and endearing title that is let down by more or less everything that happens when you’re not banging those drums.

It’s not often one game can be described as both "rhythm-based" and “role playing”, but it’s true of Patapon. If the customisation, classes and levelling had been implemented more successfully the third entry into the franchise could have cemented itself as a PSP classic. As it stands it’s an extremely creative, fun and endearing title that is let down by more or less everything that happens when you’re not banging those drums.