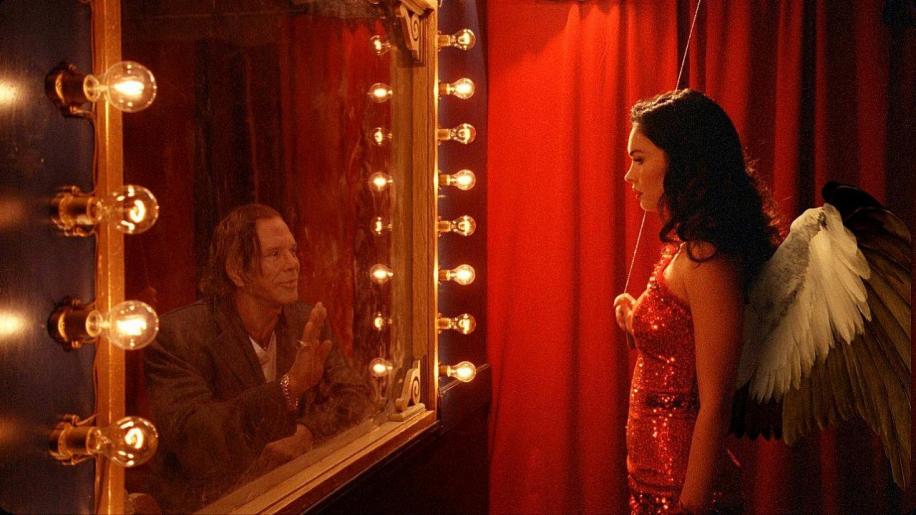 I’m an unflinching Mickey Rourke apologist. Back in the 80s everybody could see his potential – standing up to Robert De Niro in Angel Heart, and working with a series of acclaimed directors like Francis Ford Coppola (for the quality Rumble Fish) and Michael Cimino (on the mismanaged Year of the Dragon) – but Hollywood is an unforgiving place, and the man just didn’t know how to fit in, having his label of ‘the next Marlon Brando’ soon changed to bad boy outcast. Returning to boxing may have helped him find some inner strength, but it left him a physical mess, and yet, throughout all of that, he has slowly worked his way up – through some truly terrible movies – to strike at Hollywood once more, with relentlessly commendable performances, from Sin City to Domino, all culminating in his Oscar-worthy performance in The Wrestler. Now he’s back to being able to pick some relatively big films, making for an effective, surprisingly authentic villain in the slightly disappointing Iron Man sequel, and joining Sly’s entourage for the ensemble throwback actioner, The Expendables.

But, in that middle segment, where he did films that hardly got to see the light of day, however bad they were, however low budget and amateurish – he always managed to bring a hint of Rourke magic to the production. He’s just that kind of actor. And it’s a shame about the decade he lost to Hollywood power-play, and to his own ego; a shame that he’s ended up looking this way. Because nobody’s going to look back at all those films – films like Bullet, FTW, White Sands, or even Shades – and remember anything Rourke had to offer in them. Hell few have probably even heard of any of them. And even now, in amidst all the script offers that must hit his doorstep, he seems to still want to do those forgettable movies – the ones with potential that just don’t have the director, budget or script behind them to fully realise the initially interesting concept. After The Wrestler we got Killshot (although one has to wonder when exactly it was filmed since it was in limbo for what seemed like forever). It had the pedigree – a story penned by Elmore Leonard – and the cast (Diane Lane, Joseph Gordon-Levitt and Rosario Dawson), but poor management, interfering studios, rewrites and cast changes (after principal photography had been completed) left the end result a mess. Rourke was still good, but the film was a train wreck. He also starred in a remake of the acclaimed French film 13 Tzameti, alongside Ray Winstone and Jason Statham – a film which has been buried so deep that it doesn’t look like it will ever see a home format release, let alone a theatrical run. I don’t know what’s on the horizon for the guy, there’s a thriller starring Jeffrey Dean Morgan, a role in a swords-and-sandals blockbuster, but nothing that’s really got me on red alert. Until then, all we have to amuse ourselves with is Passion Play, a prime example of a great cast and a bit of potential resulting in absolutely nothing of any worth. So, what went wrong here?

Nate is a down-on-his-heels jazz trumpeter who is being driven out to the middle of nowhere to have a bullet put in the back of his skull. He slept with a mob boss’s wife, and this is the result. But in his last moments before death he appears to be saved by a bunch of native American hunters, and makes his way back to civilisation, discovering a travelling carnival along the way. There he finds Lily, a real-life bird-woman, whose beautiful wings make Nate think that she is some kind of angel. Yanking her out of her freakshow back-rooms, he initially plans to use her unique gifts to persuade wronged mob boss Happy Shanon forgive Nate’s previous indiscretions; but the plan goes awry, Nate falls in love with Lily, and then their worlds are torn apart.

You’ve got to blame the studios for a hefty number of the problems associated with this production, because what you watch here sure as hell doesn’t feel like a finished product in any way, shape, or form. The effects are terrible. I don’t mean, terrible like the tanker scene in Drive Angry, or the CG in Tron: Legacy, I mean terrible like they look worse than the ‘painted backdrop’ shots used for the old Superman movies thirty years ago. Seriously, some of the sets look like the fake moon set in Diamond Are Forever, the stunts have a terrible green-screen look to them that just feels like nobody had the money to complete the shot beyond basic VFX layering. It’s like watching a movie which has had some incomplete effects deleted scenes re-inserted into it. And it’s awful.

Beyond that it feels like the budget similarly restricted the number of scenes from the script that could actually be filmed. Entire segments feel like they are missing – as if we’ve skipped a scene or two – and the remaining, fractured whole is an incoherent, jumbled mess, where even mentally trying to ‘fill in the gaps’ can’t make up for some serious issues with lost reels. Nate appears to want to save Lily – despite having only just met her; then he appears to want to trade her for his own freedom; and the next scene shows him clearly in love with her – it just doesn’t gel well together. Perhaps if he was more mercenary from the outset, perhaps if she’d belonged to the gangster from the outset – who knows what it would have taken, but the narrative just doesn’t hold together at all, leaving you unconvinced as to the love, the loss, and the desperate redemption that the characters all appear to yearn for.

Through all of this Mickey Rourke is still on great form. His physical presence and normally dominant behaviour is suitably – and cleverly – hidden beneath a fragile, often frightened demeanour and a suit that’s a size too small; even his trousers rocking up far too high to reveal painfully conspicuous white socks. He’s playing a guy who falls in love with a girl with wings. And yet, somehow, he goes beyond all the ridiculousness and becomes this downbeat bum of a jazz trumpeter. There’s a scene where he’s selling his trumpet that is just pure Rourke magic; another one where he confronts the gangster to retrieve Lily – again, pure Rourke magic. And yet it just feels wasted in this mess of a movie.

Accompanying him we have none other than Megan Fox. Yes, that’s right, they cast Megan Fox as the love interest for Mickey Rourke. It’s not right, but it’s certainly nowhere near the most ridiculous thing about the movie – and I actually had no major problems with either Fox’s casting or her performance. Yes, it’s Megan Fox. Yes, she’s known for her toned, curved, tanned engine management in Transformers (and the sequel); known for her body, and not for her acting. And her choices haven’t really brought her any closer (although Jennifer’s Body was a nice baby-step). But she’s really not that bad here – and any problems you might have with her character are really as a result of the patchwork story demanding more than any human being could deliver. With this material to work with, she actually does ok.

Then there’s Bill Murray, still trying to ride the wave of his golden twilight era comeback, Lost in Translation. Cast massively against type – as the cold, ruthless and somewhat twisted gangster pointedly nicknamed ‘Happy’ – he does remarkably well in the role; even his physical appearance immediately telling you that this is a very different Murray that we are dealing with here. There are also fractions of depth to his character, beyond just a run-of-the-mill nasty mobster – a heartfelt scene where he recounts how he got his nickname, and a few moments of potential between him and Lily – but, again, the jerky script and ‘missing’ scenes leave the product underdeveloped, and leave his character half-formed.

This is writer Mitch Glazer’s directorial debut, having co-written the screenplay for the underrated De Niro / Ethan Hawke / Gwyneth Paltrow adaptation of Great Expectations and written the Bill Murray vehicle Scrooged over two decades ago. You can see how he got Murray involved, and his access to Rourke came from a friendship since high school; and he even brings his film-star wife, Kelly Lynch, along for the ride in a waste of a supporting role. But they really all should have known better. Glazer’s not actually all that bad a director – you can imagine a bigger budget making a huge difference to the end product – but, since he also wrote the script, you have to wonder how much of this is his fault as well. It’s been his pet project for two decades; a dream which he has been waiting to fully realise and unleash upon the world, and yet, however much botch work had to be done to push this thing through on a lacking budget, and under studio manipulation, even the hints of good story beneath don’t fully work. It’s a great premise, and, actually, a very clever ending (so, if you do choose to see it, try to avoid being like one of those people at the Toronto Film Festival that walked out halfway through), but the bit in the middle doesn’t work, and doesn’t really look like it ever could, irrespective of the bad reconstructive surgery that’s masking the original intentions.

I can’t recommend Passion Play. As stated, I’m a massive Rourke apologist, and yet it’s still hard for me to promote anything truly redeeming about this mess of a movie. I don’t see how it could have ever been a modern classic, a 9 or 10/10. But a high 7? Maybe. With the right script, perhaps a more experienced director, a bigger budget and, consequently, a longer filming schedule...who knows? As is, this one is for compulsively curious cats only, those who find something rewarding in even the darkest of pits; who will note the tragic portent in the title, the suffocated poignancy of the ending, and the desperate struggle of a powerful cast with a commendably daring story. And not just see the silly, botched, narrative, and the ridiculous effects which pluck you straight out of the experience and leave you wondering whether to laugh or just yawn. Yes, this is yet another waste-of-potential Mickey Rourke movie. Damn, I think I’m gonna’ have to go and watch The Wrestler again now...