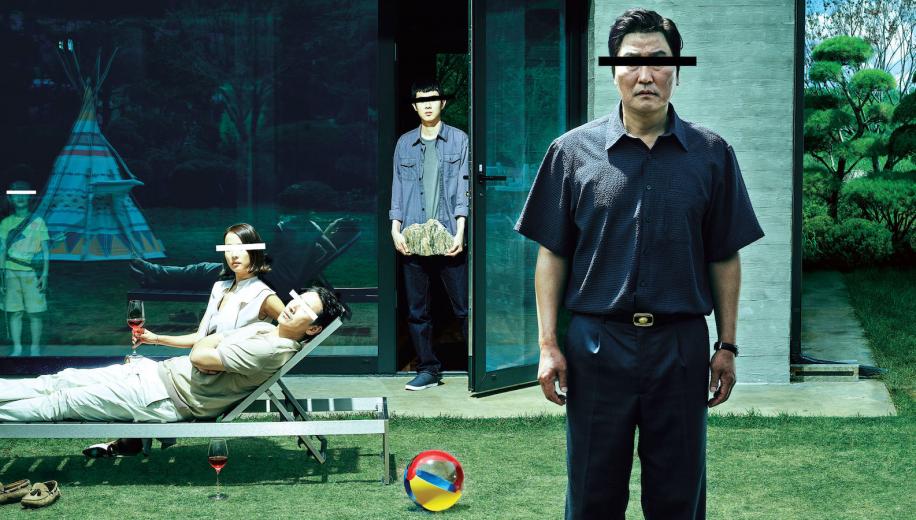 Taking the Box Office by storm - it's already the third highest grossing film in South Korea - and wooing critics on the festival circuit (it won the Palme d'Or at Cannes) as well as the Oscars and BAFTAs (it's reportedly the first South Korean film to get any real recognition from the Academy Awards), Parasite is a superbly constructed and meticulously developed drama, which both surreptitiously and organically snowballs into a full on con of almost Ocean's proportions before you even know it. And that's just on the surface, before you get to what lies beneath.

It works as an unlikely companion-piece to the director's earlier, vastly underrated Snowpiercer

The Kim family live squashed together in a horrible semi-basement apartment, infested with bugs, with a view of the literal gutter of the dirty streets, where a drunk often comes out to urinate against the top of their windows. All that changes when their son gets asked by his best friend to step in on a tutoring gig at a prestigious household, concocting a lie to secure the job, and then building on that lie to unprecedented levels.

Parasite's premise is superb, drawing you in with this long-con hook - a few lies in and you can see exactly what's going to happen, at least to begin with - and then cranking up the tension as the family try their best to keep everything together. It relies on black comedy to secure this first act, as the almost playful enterprise unfolds, but then builds the sociopolitical themes, hammering home the emphasis of stairs as it shows the sheer vertical distance between the rich at the top of the hill, and the poor living literally underground - something which itself gets only further highlighted as the impact hits home, the incidental comedy dissipates, and the consequences become unavoidable.

A superbly constructed and meticulously developed drama, which both surreptitiously and organically snowballs into a full on con of almost Ocean's proportions before you even know it

It's impressive that they have put together such a clever piece which works on so many... levels. You can enjoy it for the sheer audacity of the con - 'enjoy' being used loosely, since the tension can get absolutely unbearable - or you can contend with the varying emotions from what's going on underneath. Sure, these are largely amoral con artists that you shouldn't really be rooting for, but there's something quite interesting about seeing them revel in things that 'the rich' don't ever really stop to look at. And when you see father Kim's face when he realises just how much these privileged people look down at those below them, it's hard not to - almost unbelievably - feel some empathy.

Exquisitely shot, expertly acted, and an exercise in how to steadily mount tension, it's not surprising this has wooed critics and audiences alike. And it also works as an unlikely companion-piece to the director's earlier, vastly underrated Snowpiercer (the perpetual class divide symbolism), possibly even making up for that film being buried on release (or simply not released at all, due to Weinstein politics). With a related Parasite TV show having just been commissioned (and, for that matter, a second Snowpiercer season shooting), there's no better time than now to revel in the refreshing genius of Bong Joon-ho.