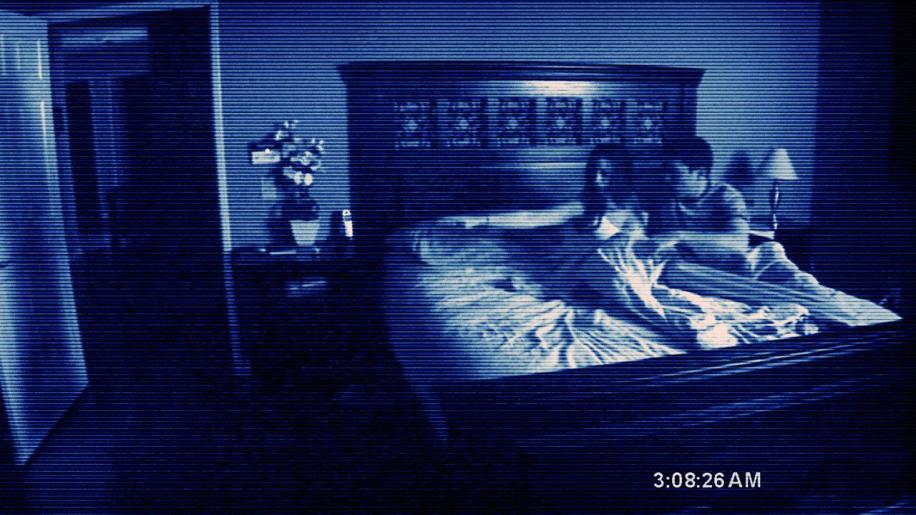 Every so often a film comes along the success of which is attributable not to a money hungry marketing machine or high concept gimmicks but rather simple word of mouth and the ingenuity of those behind its production. One such example is Paranormal Activity. Filmed on a meagre budget of eleven thousand dollars over a shooting period that lasted a mere week, its roots are unmistakably indie. If anything, it goes far beyond independent film-making as writer and director Oren Peli had such trouble even getting it accepted on the established circuit. It was submitted to the cult film festival Screamfest, an exhibition for low budget and home made horror titles, held at the iconic Mann's Chinese theatre on Hollywood Boulevard. He was then contacted by the founder of Screamfest, Rachel Belofsky who convinced him to send a DVD of his work to the website Dread Central who quickly began to sing its praises. A groundswell of support amongst the community helped gain the attention needed for Peli to attain an agent, submit Paranormal Activity to further film festivals and finally for it to be picked up by Paramount Pictures.

Set in San Diego California, the story is likewise an organic affair with little in the way of contrivance. It concerns the life of a young couple, Micah and Katie, who have become intrigued by a series of noises heard in and around their house during the night time hours. Shot entirely from the perspective of a hand held camera which Micah has apparently bought to document these events, the obvious comparison in terms of artistic style is quickly evident. The Blair Witch Project may not have been the first to have utilised the trick of using low budget prosumer equipment to film with from a first person perspective, but it is by and large the most well known and likely the yardstick by which many will judge the efficacy of the frights to be found here. Thankfully something that becomes equally as apparent is that Peli has opted for a more staid approach in terms of framing from this first person perspective and one far less probable to possibly cause any audience to feel ill due to motion sickness caused by excessive camera movement. Being solely set in the confines of the couple's house, there is little need for the camera operator to run, though a couple of occasions do ensue when the anxiety starts to mount.

Peli, a first time director, struck upon the idea of filming potentially weird bumps in the night thanks to the oddities he found himself hearing when he moved to America from his native Israel and bought his first home. Having previously lived in a more urban environment of apartments, he was unprepared for the quiet of suburbia and how this relatively noiseless night time backdrop could cause the perceived magnification of any small sounds in the dark to play on his imagination. He hasn't gone so far as to say that his actual house was haunted, but he has intimated that a few things had gone bump in the night and this seems to have formed the nucleus of the film. Thus the evolution of orchestrating a low budget dramatisation around similar fodder began to gain pace in his mind. Every part of the filming would be structured around the tight financial constraints, with unknown actors used and the only location of the entire production being Peli's own house. Throw in the fairly freeform nature of the acting, including the utilisation of the actors as the only people to operate the camera, and a touch of improvisation whilst in character, and the result created is a startlingly naturalistic atmosphere.

As with any film that allows for improvisation of any kind, or actors permanently filmed whilst in character, the question of whether the performers' personalities bleed into their portrayals or not begins to raise its head. Were this a rigidly structured piece that defined itself on tight character interplay this would be more of a concern, but the roles of Micah and Katie soon become established as typical horror/chiller archetypes rather than fully fledged three dimensional characters with multi-layered back-stories. Throughout the film we learn little of any detail that sheds light on what is happening other than a few vague hints about Katie's childhood. You may be hoping that this avenue will be explored and that it will yield the answers that so many mainstream horror thrillers feel obliged to serve up to their audiences, but Peli deviates from this blueprint. This can be seen either as a criticism or a bold move dependent upon how you view the believability of the characters' actions under great stress and just how much leeway you're willing to give a film that was tied to one location and thus probably had its hand forced in this instance.

Peli places the greatest emphasis on the spiralling relationship of the pair, with the entity that is inhabiting their house being the wedge that slowly drives them apart. Both bookend the two opposing views on the supernatural and thus could be seen as highly stereotypical. Katie is keen to bring in a psychic and demonologist, whilst Micah tries to assert his alpha male mentality and role as man of the house and protector figure in the relationship, by intending to investigate the matter himself without resorting to what he sees as irrationality. There is little in the way of originality in the creation of a duo split by their reaction to experiencing supernatural phenomenon, as it is a staple of just about every horror/chiller of the last thirty years. Luckily, the filming process allows for a slight air of freshness to surround this stale recipe, as at times it can feel like you are snooping voyeuristically on a home video intended for a marriage guidance session, such becomes the fraught nature of their coupledom. It is a genuinely well paced deterioration that is a credit to all involved as it could have descended into an ill timed and overacted farce due to the time constraints of the shooting schedule.

The one true element of originality is saved for the frights themselves. The camera follows our increasingly frightened young duo around during the day, being operated by one or the other of them and often appears unsteady in its framing. The standard approach, as set out by The Blair Witch Project should rightly dictate that any low budget piece intending to scare with hand held cameras should emphasise the unsteady nature of the framing, evoking panic and fear, during the moments of supernatural scaremongering. Peli has deviated in a bold move, which could easily have backfired, by instead making the camera static during all the times when we are to witness a strange happening. The camera is placed upon a tripod by the couple's bed in order to capture whatever noises they have heard coming from the landing. This forces the viewer to not only scrutinise one particular area (usually avoided by low budget fare that lacks the spending power to make any effects truly convincing), but also creates an eerie atmosphere as all is silent and still. You wait in anticipation, knowing that something will likely happen, yet with little idea as to what it will be. With the presence never being truly explained, the possibilities are endless and this also allows Peli to choose what his created entity is capable of and thus what he will show by way of special effects.

Obviously the aforementioned budgetary constraints have had a great hand in what strange ways the apparition interacts with the house and the couple. Understandably the majority of these moments are small in nature and play up the reality of the situation in comparison to the grandstanding spectres of mainstream Hollywood fare. Here doors creak, footsteps are heard and the old saying “things that go bump in the night” was never more apt. Most effects work well, with the understated tone heightening tension with even the smallest movement or shadow, but a few stumble a touch. The duvet rippling from a gust of spectral wind (we'd all like a ghost to blame that sort of thing on!) and the classic TV on with static feel like stretches for the sake of padding. Towards the end of the film though things take a decidedly more sinister turn, as the ghoul seems to grow in power, which is where the real shocks are saved for. The ending may owe more than a little of its eeriness to Ringu but that doesn't detract from its effectiveness. That Peli has managed to wring out the level of tension evident here is a minor miracle on his meagre means and I can honestly say I've seen less convincing visual trickery on films a thousand times costlier. It may not be as original or as shocking as some may have you believe, but the fact that it emphasises realism and mundanity above cheap thrills for the majority of its runtime means it has a level of creepy atmosphere most mainstream chillers can only dream of and definitely marks Peli out as a young director to keep an eye on.