A platform for therapy 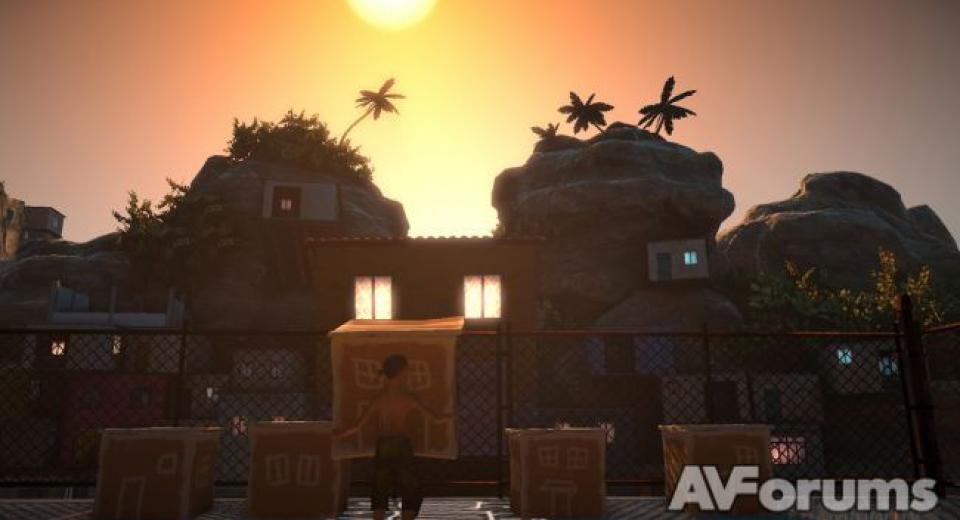 For videogame designer Vander Caballero, creating Papo & Yo represented therapy. It’s an abstract visualisation of his childhood doodled large on a monitor or TV screen; a shared experience for thousands of players that affords a glimpse into the world of a scared young boy coming to terms with an alcoholic and abusive father. Although Papo & Yo’s playable form takes shape as a whimsical childhood platforming adventure, this is a game that’s never less than open about its subject matter, and the analogues between protagonist Quico and the rage-filled Monster that accompanies his every move are explicitly drawn. As such, despite the visual style, this is a three hour experience that might be a little tough for some.

For the most part, Quico’s world is one of intense wonder and joyful exploration. South American favelas stretch off into the distance in a haze of sunshine, footballs litter the street, coconut trees shed their fruit and ramshackle houses represent not poverty but platforms on which to jump and clamber. A little girl pops up on the rooftops, out of reach but prompting Quico through the ever-changing landscape, encouraging him to bring Monster to the ‘Shaman’, as he might be able to dispel the rage hiding within.

To reach that destination, Quico and his gigantic companion are required to navigate several levels of relatively sedate platforming mixed in with gentle environmental puzzles. Exploration usually uncovers a chalk-drawn switch in a corner or a dank doorway, and interacting with those normally activates a mechanism that open up a section of the world to elaborate dream-like manipulation at Quico's hands. Houses float into place in the background as you move boxes in the fore; a whole street grows legs and morphs into a portable centipede-inspired bridge; light-filled doorways offer a quick portal to another section of the level; stairs are carved out of walls in piano formation; shacks bounce around on pogo legs to provide a pathway to the area beyond. It’s a unique puzzling aesthetic, and one that’s filled with entertainingly implausible segments as Quico’s imagination bends reality to his whim. When not in contact with Monster or his rooftop guide, Quico is often aided by Lula, a small robotic toy that facilitates a jetpack double-jump and remote switch activation. Those mechanics, although occasionally a little shoehorned into the design, open up another layer of complexity to proceedings, but one that’s never less than obvious in nature. Recently-uncovered platforms float clearly just out of reach of a regular jump, switches located high on the wall are marked out by an audio cue and a chalk targeting line to draw Quico’s attention, whilst activating them is as simple as tapping a button. In practice, those basic jumping and interaction mechanics are pleasant if perhaps a little imprecise at times, but as falling off the edge of the world is met with a quick respawn back to the site of the miscalculation, death is hardly a frustration.

Thanks to its forgiving nature and abundance of tips, Papo & Yo is, for the majority of the time, incredibly easy - but then that was never the point. Level objectives usually boil down to providing a pathway for Monster to navigate his way to a special switch, allowing our protagonists to move on to their next surreal set piece. Manipulating Monster is as easy as finding a coconut and throwing it to the location on which he’s required, his ravenous appetite providing the rest of the impetus. At preset positions he might take a snooze against a tree or a wall, allowing his Totoro-esque gigantic pink belly to be used as a springboard to reach high ledges that would otherwise become inaccessible.

Monster then, is a friend, and the focus of the majority of the game's most impressive and organic moments. He’ll play with Quico if thrown a football, gleefully laughing as he hurls it back towards his companion, and there are genuinely touching moments to be had as the pair of them navigate their environment together, co-operating and progressing with their own agenda. But there is, of course, another side to their relationship, and the sudden exhibitions of violence are all the more potent after exposure to their bond. As we know, this Monster has a problem, and that problem is represented in Quico’s world wherever frogs are present.

The frogs, it turns out, are irresistible. Monster claws at drainpipes and railings to get his hands on them, and if Quico isn’t quick enough to hide them away or splat them against a wall, he’ll devour any that are within reach. On eating any of those green and joyfully-rendered creatures, Monster turns into a rage-filled beast, pursuing Quico around the environment, picking him up and hurling him around the level to the sounds of child-like screams as the screen pulses red with danger and orange with fire. The first time that happens is pretty shocking to behold. It's hardly graphic, but armed with the knowledge that this is somebody's real-life childhood we're living out in metaphor, Papo & Yo packs quite an emotional punch with its relatively small suite of interactivity and animation.

There’s a fine line to be drawn when making something as surreally framed as those moments, and they could easily have disconnected the player were they not rendered with tact and a dose of empathetic realism. But they are, and the tone is pitched correctly to carry the message that Cabellero wants to get across, which is ultimately one of acceptance rather than the tale of a virtuous saviour. The only thing that’ll stem Monster’s rage is a small blue fruit tucked away in the environment somewhere, eating which returns him to the friendly, docile state that Quico knew only moments before. How long can you stay mad? And can you actually help anyway?

As a pure videogame, Papo & Yo is three hours of pleasantly engaging platform action that relies entirely on its context to sell the experience. And it does; in broad, sweeping strokes that leave you in no doubt as to its message and the source of its metaphor. Some might find the flashbacks, family dedications and sporadic moments when reality becomes a part of Quico’s world perhaps a little too indulgent, but I’d argue they serve their purpose. This is a game that signposts its agenda in its opening minutes through to the very end, and it’s a tale that’s likely to elicit emotion - for better or worse - in the majority of players that see it out to the credits. As far as I’m concerned, that’s no bad thing.