One for flat earthers? 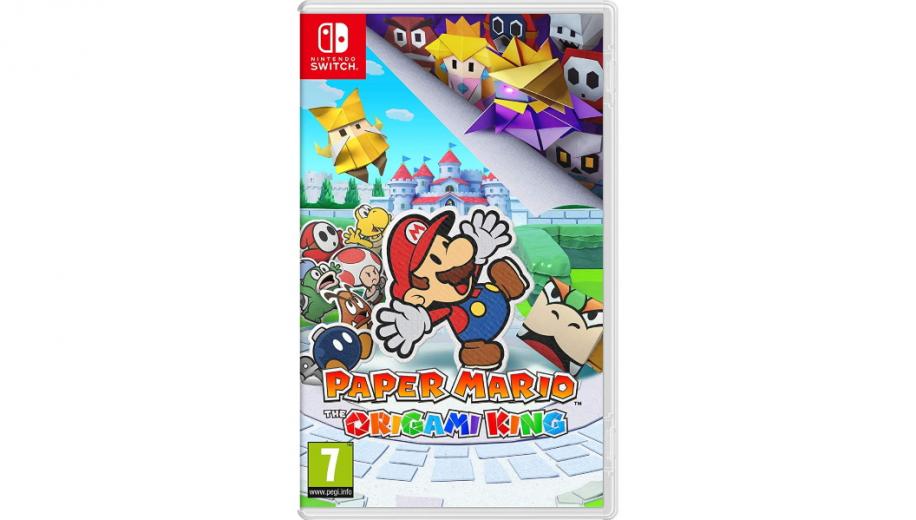 Paper Mario returns at last, with his first appearance on the Nintendo Switch being one of 2020’s biggest gaming releases, but longstanding fans might feel a little deflated. Flat, even.

Not that The Origami King is a bad game in itself, far from it. More that it’s not really in the same mould as the RPGs released in the last 20 years. Instead, we have an adventure that mostly ditches the traditional role-playing elements, and features a puzzle-based, simplified combat system that has its moments but feels a little basic.

On the upside, the game world is now mainly open, bigger, and more explorable – previous Paper Mario titles cut the landscape up into levels. And the plot and characters are more fleshed out – so to speak.

Even the Switch’s motion sensors get some action

Olly, the eponymous Origami King, has taken over Toad Town and stolen Princess Peach’s castle, turning many of its inhabitants into folded origami automatons in the process. Worse, he has turned the Toads into folded objects, which are scattered around the kingdom. You, as Paper Mario – one of the few 2D souls remaining – must put it all right.

This leads to some clever in-game puzzling and exploration, with secrets and collectables aplenty. Even the Switch’s motion sensors get some action, with new abilities enforcing some device or Joy-Con swaying (unless you turn it off in the settings, in favour of more traditional controls).

Paper Mario’s new 1000-Fold Arms, for example, can grab elements of the cardboard backdrop and tear or move them, revealing new characters, bonuses or simply help you progress. With motion enabled, you wobble around the Switch or Joy-Con controllers to move the arms on screen. It’s a neat little mechanic that makes it feel fun, although much of the rest of the game is more conventional.

The aforementioned combat is one that uses simple, traditional control methods. It is set in a large wheel, with Paper Mario in the centre and the enemies in bands around him. You then have turn-based attacks, but to get the most out of your limited move set (roughly jumping or hitting them with a hammer), you are best to put your foes in the best formation to inflict most damage in one go. This is done by spinning the different bands on the wheel as part of your turn. Any remaining enemies then get to strike you and remove some of your own hit points (HP) – the sole remaining element from the role-playing mechanics of yore.

To be fair, it’s fun to work out strategies, especially later on when it gets harder and enemies with additional abilities emerge to add extra spice. You are also occasionally joined by a party member you’ve picked up along the way. However, while friendly and enjoyable, it’s hardly taxing and feels like it was devised more for quick burst portable play than for a big screen TV.

And that’s, perhaps, the biggest takeaway. Played on a portable-only Switch Lite, The Origami King makes sense. It is actually a superb travel game, not requiring too much brain-matter to defeat foes or complete puzzles and, bar the fact that you can only save by reaching specific in-game points, it has great quick burst appeal.

We just wonder if it’s the best example of a Switch game to play on a big-screen TV.

Graphically, Paper Mario: The Origami King has everything you’d want and more. It is crisp and gloriously colourful in 720p on a Switch in handheld mode or Switch Lite, and looks equally stunning in 1080p when docked.

We never get tired of the clever graphical nuances created for a 2D Mario in a 3D world, and the origami elements look tangibly cardboard.

We’re not talking home cinema-standard effects though, just an overall pretty aesthetic than kids, young and old, will appreciate.

One note of caution though, if you have hazy eyesight, some of the in-game text, especially in settings menus, can be rather small when played on a portable display.

In all honesty, there’s nothing really spectacular about the soundscape in The Origami King. It’s just not that sort of game.

It has a decent score, but you might even get tired of the babbling audio during character communication – which is done through text bubbles throughout.

Naturally, it’s in stereo on the Switch and Switch Lite in portable mode – which doesn’t really make much difference.

It does lack depth, but excels in charm and gentleness

There’s no doubt that The Origami King is a more-than pleasant game to play and provides a decent adventure, but some will bemoan the decision to cut out (pardon the pun) the majority of RPG elements from previous games in the series.

It does lack depth, but excels in charm and gentleness, which will be enough for many. And, it works well as a portable game to take on holiday or when commuting.

If you’re after something more substantial, however, you are perhaps better to look towards the Zeldas and other Mario games available on the Switch already.