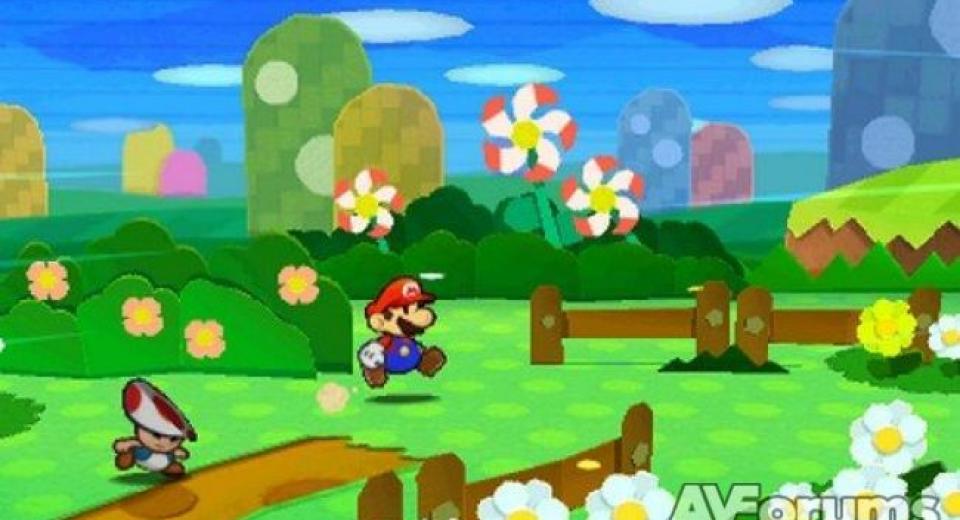 The wafer thin protagonist bounces once again through a dioramic three dimensional world, which is still as eye-catchingly pleasing as it was when the premise was first introduced, but with this instalment there’s a strange in-between feel to proceedings.  Bridging the gap between Mario’s proper RPG outings, and the RPG-lite elements (as seen in the titles more focussed on artistic design utilising the paper motif) was perhaps the intention behind the use of turn based battles. However, it appears the Paper franchise is heading towards the kind of accessibility - and with it a questionable degree of depth - that the New Super Mario Bros titles have.

It’s nice not to go through the now humdrum prerequisite kidnapping schtick and get an original story, the Paper games have always been able to work around the Mario staples by assuming some kind of fourth-wall breaking post-modern interpretation was being processed by the player.  This time around we’re introduced to the annual Sticker Fest, where locals watch the Sticker Comet pass by.  This has predictably been wrecked by Bowser, who in his greed touched the Comet, which brought catastrophic consequences; Bowser gains great power and the Royal Stickers need to be re-collected by Mario.  He is aided in his quest by Kersti, a sticker fairy seeking to rectify the situation, who acts as a general guide. As with previous Paper entries, the game’s got charisma by the bucketload, aided massively by the smart visuals and surprisingly sharp script; there are a few great lines in there, so you’d be well advised not to hastily skip all the conversations.  The 3D effect of the console has its detractors, but it works well when there’s a clear delineation between fore, middle and background and the objects within the frame are two-dimensional, so it fits like a glove with the paper theme.

The game is structured to be reminiscent of the standard Mario platforming Level/Stage scenario whereby a world map shows your progression in a linear, but sometimes circuitous looking manner.  You can however tackle them in whatever order, but your headway may be limited by the abilities you currently have.  It’s a nice way to test the waters, backtracking and seeing what’s about, under the - occasionally illusory - banner of freedom.  All the usual Mario backdrops are here, desert, waterside and abundant greenery.

The differentiating factor with this Paper instalment is the use of stickers, and it’s a mechanic that seems designed for ease of use, but can frustrate because of its streamlined nature.  Because of the havoc after the comet catastrophe, stickers are strewn everywhere, some simply lying out in the open on surfaces, ready to be collected, whilst others are a little more hidden and allow you to explore the levels’ secrets further.  At their core they are a form of expiring weaponry, a one-time consumable attack that can be found in levels or bought in a shop. It’s a nice idea that combines simplified item collection with the standard turn-based Mario RPG staples; you time a button press in order to gain bonus damage when you’re utilising a sticker attack and use the same technique to block and minimise any incoming flurries from enemies.  I dare say finding a shiny will still hold a remnant of nostalgic wonder for all those brought up on Panini football albums, but here they are something of a double-edged sword, as they are significantly larger in size and thus reduce the amount you can carry.

This forces you to look past the cuddly facade and start thinking about tactics and inventory management.  The two combine and are impossible to untangle as without a standard re-usable attack to fall back on, it becomes imperative to prepare for each level with a sensible variety.  As you’d expect, their effectiveness on particular enemies varies, so there’s some testing needed.  To spend time trying things out in an RPG - experimenting with attacks and items - is almost the essence of the experience for many; part of the fun is exploring the layers of strategy, finding a combination of tactics upon which you can build a formula for battle success.

Sadly, without any experience points, Sticker Star offers no recompense for time spent in pursuit of battle perfection.  It means Mario sidesteps the labours of grinding, but it also gives the game a bit of a personality disorder.  What is it?  Levels unfold like a simplistic three dimensional platformer, bereft of real split-second jumping thrills, merely littered with a few enemies to hop onto.  Thankfully the scenery holds little secrets to uncover, which disguises some of the linearity.  You’ll backtrack a few times, looking to open up the route ahead, which is often linked to pasting large stickers onto scenes in order to open up new paths.  Sound familiar?  Well, given all LittleBigPlanet owes to Mario, I’m sure Sackboy wouldn’t begrudge one little gameplay mechanic being borrowed in return. The special variants are arguably too large though, decreasing the amount of basic attacks you can carry, but this does at least force you into actually interacting with the environment in order to top up your album.  They too though are finite, and the system whereby you can only attack the first enemy in line will infuriate anyone left with hammers, say, against a koopa and a couple of goombas.  The hammer will only force the shelled creature to hide, leaving you as a sitting target for the others in line.  Running and outright avoidance of combat seems an odd choice in a game seemingly designed around the tactics of its fight mechanics.

It’s a slick, mini-platformer-cum-RPG-lite type game, somewhere betwixt and between anything of substance in any one genre but gets by time and again thanks to the unquashable charm of the franchise staples and a brisk pace, helped in no small part by the easy-to-navigate level structure.  It takes a while to get to the point where you stop to evaluate what’s going on, and when you do you’ll likely realise Mario's presentation is not the only aspect of this game that's pretty thin; what’s considered accessible gameplay to some will be seen as a lack of depth to others, which is a great shame because the presentation and core ideas held great promise.

Papering over the cracks

Paper Mario: Sticker Star is a breezy game, that is almost impossible to dislike because it’s charismatic and tries to do something unique.  It succeeds in many ways, but if you’re a devotee of Mario RPGs on Nintendo handhelds, and assumed this might fall in line with the stellar Mario and Luigi outings, this will be a shock.  Those accustomed to more complex battle systems will see the streamlined mechanics as illuminating the game’s shallowness, but there’s an argument that these could be considered design choices intended to help players avoid getting bogged down in the slog of grinding and combat loops being repeated ad infinitum.  Similar to New Super Mario Bros 2 on the 3DS, it’s a game designed to whizz along at a brisk pace, unlikely to leave a lasting impression but full of the usual character with some neat touches; an easily enjoyable finishable-by-all slice of RPG-lite fun.