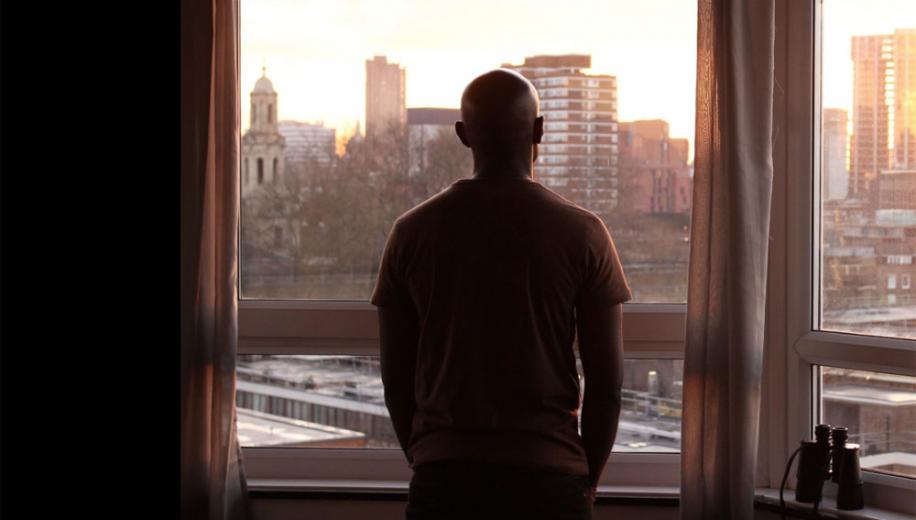 After watching Panic you might pay a little more attention to what you see the next time you peer out of your front window.

Confined within the walls of his flat, where he feels safe, Andrew Deeley looks out on the world, watching as it goes by. With binoculars to hand he peers into the windows of near by flats, watching as people go about completing mundane household activities. But in the process of watching other people he is also forced to witness the darker, seedier side of life that usually goes by unseen. Andrew Deeley (David Gyasi) is a music journalist who would review the latest artists at gigs and concerts. However due to the psychological effects of an attack he now suffers from agoraphobia unable to leave he confines of his flat where he conducts telephone interviews with musicians and through the wonder of the internet he is able to continue his journalistic work without ever leaving his home. Deeley replaces normal human interaction with the distanced one-sided interaction of watching people outside his windows.
So every day Deeley watches as people walk home with their shopping, return home from work and so on. But there is one window he keeps returning to, he obsessively watches as a young Asian girl watches TV, hangs up her laundry and, as cliched as it may be, eats noodles. It’s only after Amy (Pippa Nixon), a female guest of Deeley’s, gazes through the binoculars that it appears the average life of this young Asian girl is actually very far from average. Witnessing something, although she’s not quite sure what exactly, Amy panics and leaves, leaving Deeley to watch on through the now closed blinds as something potentially very bad goes on, seemingly unnoticed. With this new information Deeley is faced with the predicament of either ignoring what maybe just happened or confronting his agoraphobia and general fear of what’s outside his flat in an effort to try and help this girl. Panic is the first feature length film written and directed by Sean Spencer. Taking its influences from classics like Hitchcock’s Rear Window (not to mention Brian De Palma's underrated Body Double) and themes of immigration and body trafficking from Stephen Frear’s Dirty Pretty Things, Spencer has undoubtedly proven his worth. Panic was shot on the Arri Alexa giving the whole film a minimalist approach emphasising the contrast between light and dark, using shadows to create an encroaching atmosphere. Using extreme close ups and tightly focused shots, Spencer invites the audience to become a willing participant of Deeley’s voyeuristic world but as the film develops we come implicated in the process of watching Deeley in the same way he has been watching.

The external shots of London’s urban estates at night give it a vibrance and coolness but as the film progresses we learn, along with our protagonist, that under this exterior hides a darker side to London that often goes unnoticed if it’s not reported as front page news. Deeley being a music journalist gives Spencer and composer Christopher Nicholas Bangs a good reason to really utilise the score and soundtrack to provide insight into Deeley’s character and his slow decent towards internal turmoil. Using a combination of strings, lo-fi electronica and sub-sonic orchestration Spencer successfully creates an increasing sense of foreboding danger and paranoia heightened by long takes and sustained single shot scenes. The minimal dialogue throughout the whole film makes it more of a visual affair, paying close attention to the effects of fear and panic, really allowing the small cast to live and breathe their roles.


Although small, the entire cast were all picked perfectly for their roles. David Gyasi (Interstellar) can be seen as a modern day, urban James Stewart but with less of the cheek and charisma, with no detriment of his performance. Suffering with a type of agoraphobia Deeley’s character is forced to communicate his thoughts and feelings visually, which Gyasi does very astutely. Deeley isn’t a macho type of guy, deep down he’s good and you can see the conflict he feels with some of the actions he’s forced to take through Gyasi’s almost down played performance. Pippa Nixon’s character isn’t in it a huge amount, but like Deeley, Amy has secrets which she is forced to battle with when she must choose whether or not to help him. Nixon successfully mediates between a cold and blunt performance which eventually melts into something warm and caring as her character is drawn deeper into Deeley’s desperate attempt to do the right thing.

Panic is a slow burner and doesn’t really have much of a pay off. But don’t let that stop you from seeing it. It’s awkward and painful to watch at times but it’s really something that should be seen if only for the visual quality of the filming. It’s not for everyone but if you do give it a chance you won’t be disappointed.