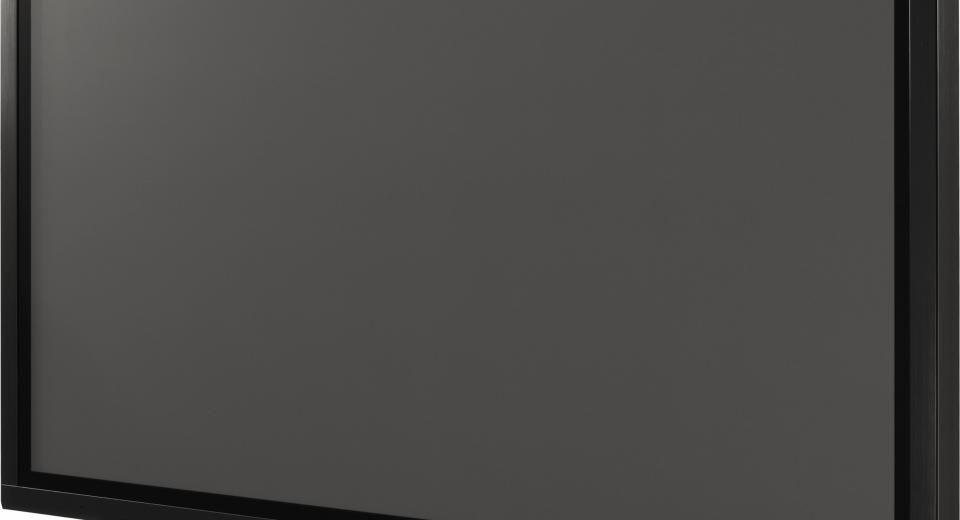 Unlike most of the display products we cover here at AVForums, Panasonic's TH-65VX100 is a monitor, not a television. It doesn't have a TV tuner, it doesn't come with built in speakers (although these can be added), and it doesn't accept quite as wide a range of input signal types as a consumer television. No, this is a piece of 65" glass designed to take its place at the centre of a fully integrated studio setup, or in a "luxury home cinema application" (Panasonic's words), and it's sole job is to produce beautiful big-screen images. AVForums has UK exclusive review coverage of this display, so join me as I assess its performance. After moving the display out of its flight case, my first impression was how stunning the screen looks on its own. Whilst consumer Plasmas have been dragged down the route of using a glossy black bezel (something which I find incredibly kitsch, not to mention a pain to keep clean), this professional monitor uses a thinner, sleeker, brushed steel frame which is essentially matte. Your eyes are firmly on the screen thanks to this design. As this is a professional display, you can tailor its connectivity options to suit your system, by adding or removing input boards on the back of the panel. Ours came with two HDMI boards with two inputs on each (that's four HDMI ins), an RCA Component video and audio input board (which can accept video in both Y/Pb/Pr or R/G/B signal formats), a PC VGA input board, and a Serial interface so the panel can be controlled by a computer. Professionals can also install an SDI input board, for example, to monitor video directly from a studio videotape deck. There's various other such connectivity options available, most of which won't apply to home users who choose to adopt such a display.

After I connected my AV Receiver/Video Processor, I turned the display on and selected the HDMI1 input. After a short “woosh” of the fans (which immediately ceased afterwards), up popped the Blu-ray material that I was already playing. (the earlier AVC-encoded, Region A, non-tampered-with version of The Descent, which looks fantastic). After selecting the “Cinema” viewing mode instead of the default “Dynamic”, the quality of the image was such that this looked that bit more like a giant, flat CRT with perfect geometry, instead of a Plasma display. After familiarising myself with the remote, I explored the system menus further. The main menu is divided into four categories: Picture, Setup, Pos./Size, Sound, and Options. Our review sample didn’t come with speakers attached, which immediately negated the sound menu, and Options was also greyed out. Some discussion with Panasonic revealed that holding the OK button down while selecting the greyed-out “Options” would bring up a configuration sub-menu with On/Off switches for some minor areas of operation.

Naturally, I first explored the Picture Menu, which first presents a choice of Picture Mode. The choices here depend on whether or not the "ISF Mode" is enabled (the option is buried under a password). By default, the Picture Modes are Normal, Dynamic, Cinema, and Monitor. With ISF Mode enabled, these change to Normal, Monitor, ISF Day, and ISF Night.

The selection of the "External Scaler Off/On" menu item affects the choices here. If there's an external scaler present in your setup, the display will grey out either all of the basic picture adjustments ("Monitor"), or all except the Contrast setting ("Standard"), suggesting you make any necessary adjustments on the video processor rather than the monitor. As this is designed strictly as a display device, I decided to review it in this manner and use the Reon HQV processor in my AV Receiver.

This left me with a Contrast (White Level) adjustment, a White Balance (Greyscale) preset which I set to Warm, and an option called Colour Management. Sadly, this is actually an On/Off toggle, and not a Full 3D Colour Management System, just like on the consumer displays. Forgive me for being more than a little disappointed at the absence of a 3D CMS on this screen. Fortunately, the Advanced Settings screen presents more options. Here we have a Gamma adjustment (which I set to the video standard of 2.2), as well as Black extension and Input level controls to fine-tune gamma performance further. There’s a sometimes greyed-out option for Automatic Gain Control, followed by individual Red, Green and Blue adjustments for both the high end and low end of the Greyscale. Lastly, there are the Cinema Reality and Noise Reduction options, again greyed out in my example, but accessible to those not using an external processor. I turned this feature off to explore the noise reduction options. These are listed as P-NR (Temporal Noise Reduction for moving noise), Mosquito NR (for removing so-called mosquito noise from MPEG encoded video), and Block NR (for smoothing out quantization errors/blockiness in the same), and all of them are fairly effective.

By the way, this didn’t affect me since I was using my own amp to handle video switching duties, but each of the inputs on the display stores its own settings. The four Viewing Modes are also entirely independent.

The other menus featured largely unremarkable options to control the look and position of the on screen menus, Power Saving features, Screen saver options, and screen positioning adjustments.

Calibration: Before and After

You might think that as a professional monitor, the TH-65VX100 wouldn’t benefit from calibration as much as a consumer TV. It’s true that its "Dynamic" mode isn't quite as eye-watering as those present on consumer models (Panasonic presumably assume people buying or installing these screens will know better), but the purpose of calibration is to match a screen to a system and deliver optimal results from an individual display, which not even the best monitor could be engineered in anticipation of. In other words, there was still fine-tuning to be done.

A basic calibration left me with a fantastic looking image, so I was surprised at how far from optimal its Greyscale tracking was after measuring. Test patterns revealed oversaturated, out-of-gamut colours, but real world material was already looking good for the most part. After looking at the measurements, it became clear that while the display was inaccurate, it was almost entirely uniformly inaccurate across the entire Greyscale range (the spikes at the left of the chart indicate areas too dark for the sensor to measure reliably). This partly explains why the picture didn't scream "incorrect", and bodes well for the final calibrated performance.

After tweaking the Greyscale High and Low end options in the Advanced Menu, I was left with the second-flattest Greyscale tracking chart I’ve witnessed from a Plasma display. The highest Delta Error measured at around 1.3, making it essentially unnoticeable. Of course, without any Colour Management System, there was nothing I could do about the inaccurate colour gamut.

As its designed for use as a 1080p display device, this monitor can’t accept as wide a range of signals as a consumer display. This means that 480i and 576i standard def interlaced video are out (it does, however, accept 1080i).

This means that I had to input 480p as the lowest available resolution to the display, meaning that performing any Deinterlacing tests would be pointless. I did, however, notice that the display uses an unusual scaling algorithm (at least in comparison to consumer TVs). Instead of presenting fairly soft scaled video (as on Panasonic's consumer Plasmas), this monitor appears to use a simple pixel resize, without averaging, pixel weighting, or clever interpolation techniques. In other words, the scaled image is incredibly clear, but with the individual pixels visible. Most home cinema installations won't benefit from this, but I'd imagine that this is for quality checking purposes: studio technicians could examine material using this mode and be sure that any faults present (such as ringing) originated in the source, and were not being caused by a scaling algorithm. The final picture quality displayed by the TH-65VX100 was fantastic, and in all honesty, very difficult to fault with the naked eye. The practically uniformly-flat greyscale tracking was, for me, one of the key components in its believability and quality: there were no traces of other colours creeping into shadows, for example, when I looked at the Director's Cut version of Blade Runner (on HD DVD, but available on an identically-encoded Blu-ray Disc also). The amount of detail present in the shadows was great, and the believability of the blacks was excellent even with some ambient light hitting the surface of the panel (thanks to Panasonic's optical filter). 1:1 mapping and a lack of resolution-killing video processing also helped to ensure that detail was not lost before hitting the screen. Turning out the room lighting took things a step further; in addition to the inherently CRT-like properties of a Plasma panel, the contrast ratio (which I measured as just under 3000:1 in these conditions) further added to the overall effect. The black level here was a shade of suitably dark, dark grey, probably not as deep as the Pioneer Kuro panels, but it would probably be difficult to tell without a side-by-side comparison. There really isn't much more to add: in all of the best looking Blu-ray Discs I selected, I couldn't find anything untoward with the image. And, for what it's worth, better looking DVDs (if you can find one these days) looked excellent also, but this was largely due to the scaling and deinterlacing in my AV Receiver (although having this display showing the end result certainly didn't hurt!)

This has been a difficult product to review, because I’m used to assessing all-in-one consumer devices, fixing their inaccuracies, and recommending them (or not) to a broad audience. The TH-65VX100 is not a consumer product and isn’t designed for a broad audience, but for the considerably more niche professional world, and for custom installs. It is one part of an entire system, and how it performs is very closely related to the pre-processed signal it is fed.

Having actually used this display, I can say that in most areas, it does a spectacular job. Its out-of-the-box Greyscale inaccuracies are fairly easy to correct and can produce spectacular results. I do think that it’s a real missed opportunity to not include a Colour Management System on such an illustrious display (a point which Pioneer's competing KRP-600M display addresses to some extent). If you finally elect to (and can afford to!) include this panel as part of your system, I'd recommend that you do so in conjunction with a video processor which can compensate for this deficiency. In such a setup, the TH-65VX100 will really go the whole nine yards, but even without, this is a beautiful display which will put big smiles on the faces of a lucky few, thanks to its fantastic contrast, Greyscale, and overall screen quality.