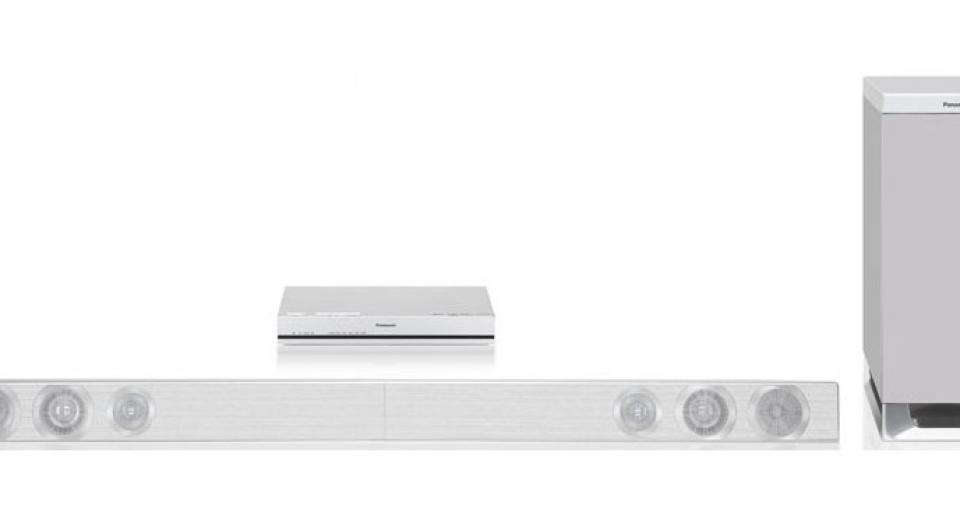 It doesn’t seem very long ago when we got some time alone with the HTB550, the predecessor to the model under review here, the Panasonic-SC-HTB570. On the face of it, the 570 looks like a largely cosmetic update to last year’s model with a new silver colour scheme but still the same flexible installation options – it can be used in a soundbar configuration, or as separate stereo speakers, either wall-mounted or on their stands. The SC-HTB570 is also a bit unusual in the soundbar market by offering its amplification and connections in a separate unit so let’s see if these non-standard ingredients combine to make pleasing audio cocktail.

Panasonic’s new found love for silver finds its way from its TV ranges in to the Home Theatre products. Clearly they would love you to team them up and we have to say that although we’re not always sold on metal-effect designs, the SC-HTB570 looked great in tandem with the VT65 plasma that was here for review at the same time (we know, lucky us!). The decision to go with a separate unit for connections and amplification has both its pluses and minuses; we have found it difficult with some other products to achieve a tidy install – it’s not easy to conceal a couple of HDMI cables, a power cord and perhaps a couple of dedicated audio leads around the stand of a TV, so the HTB550 scores well there and the stereo cables supplied are very flat so easy to trail under the base-stand of most TVs. The downside is, you’ll need to find room in your rack and give the unit line of sight to allow the infra-red to travel from the remote control to the box, although that’s not such a great concern if your TV has an ARC (Audio Return Channel) compliant HDMI terminal, which means you can use your TVs handset to control the volume.

It’s always good to have choices and that’s precisely what Panasonic has provided to end users by allowing the SC-HTB570 to be set up in multiple arrangements. We suspect, since Panasonic is pitching it as such, that most will go with a traditional soundbar arrangement and as the main speaker bar sits less than 7cm high, most shouldn’t have any issue placing under the TV, on a rack or cabinet, without it getting in the way of the screen or infra-red senor. To use it that way, simply requires the two speakers to be screwed together using a supplied bracket. Panasonic also includes a wall-mounting kit for both a soundbar configuration or used as separates and, if that were not enough, finally there’s the option of sitting the speakers on supplied stands. For the purposes of the review, we used the HTB570 in both configurations, more on that later.

Connectivity options are quite generous for a soundbar and the SC-HTB570 features two S/PDIF digital audio inputs as well as an HDMI terminal. There’s also a HDMI output that can operate bi-directionally if you’re TV carries ARC on one of its HDMI inputs, so we’d advise connecting your Blu-ray player to the HDMI input whilst hooking up the ARC to the appropriate terminal. This means you can then listen to all your TVs sources through the speaker(s), albeit some will be downmixed to stereo from multi-channel audio.

The remote control is the same as last year’s version which is no bad thing and it’s suitably compact, meaning it fits comfortably into the palm of your hand. It is sensibly laid out and includes all the basic buttons you need for controlling the HTB570, including on/off, volume, mute, subwoofer level and input selector. In addition there is a dedicated button for selecting the TV, as well as one for selecting a Bluetooth device as the source and there is a control for adjusting the level of the Clear-mode dialogue effect. Setting up the HTB570 is simplicity itself and once you’ve decided on the configuration, connected the stereo speakers to the main unit and chosen where to position your subwoofer, all you need to do is wirelessly link the subwoofer to the main unit. The subwoofer’s linking ID is preset in the factory, so the subwoofer should link automatically when switched on. This connection is indicated by the Wireless Link LED at the top right hand corner of the subwoofer, which lights up green. As well as linking up to your traditional audio video sources, the SC-HTB570 can also connect with devices via both Bluetooth. Pairing proved very easy and you can register up to six Bluetooth devices at any one time. The HBT570 has an Auto Standby Function that, when activated, will automatically put the unit in standby if no signal is input or operation performed for two hours.

The above mentioned Bluetooth connectivity is great for the way in which many people enjoy their musical collections these days, and we had no issues in connecting both an iPad 4 and Nexus 7 to stream music from the cloud via both iTunes and Google Play Music. We got two dropouts in about 8 hours streaming, which is robust by Bluetooth standards and thankfully each was only momentary before the HTB570 regained the plot. The HTB570's Bluetooth supports the A2DP profile and can pair with up to 8 devices although, of course, only one at a time. The manual claims it will work up to about 10 metres with line of sight, which seems about on the money in our experiences.

If you connect a Blu-ray player, DVD player or digital TV receiver to the HTB570 you can take advantage of the built-in Dolby Digital and DTS decoders. This is another useful feature as it allows the user to benefit from the full discrete 2.1-channel audio, rather than being limited to a stereo downmix. Whilst the HTB550 doesn't include Dolby TrueHD or DTS-HD Master Audio this is no great loss because given the limitations of the speakers and the 2.1 channels, it is unlikely you would really be able to take advantage of the higher resolution formats.

The HTB570 also includes a range of DSP sound modes which Panasonic call 3D Sound and are designed to create a greater sense of surround from just two speakers. There is Dolby Virtual Speaker which creates a virtual 5.1 effect, 3D Surround Effect which applies Panasonic processing to the existing Dolby Virtual Speaker effect and Clear-Mode Dialogue which is designed to emphasis dialogue in sportscasts or TV dramas. Engaging and disengaging the DSP can be a bit of a pain as it involves holding down buttons on the main unit and remote simultaneously and we really think there should be dedicated buttons on the controller.

We’ll get this clear right from the off – the Panasonic SC-HTB570 is far better tuned for movies than it is music. Even with the Clear Mode Dialogue DSP disengaged there’s a certain air of over-emphasised clarity to the audio that doesn’t sit too well with acoustic music, in particular. The Music Sound Mode goes some way to alleviating the treble bias but we were never fully happy with it. It sounds nice and tight with something like New Order’s Technique but ask the HTB570 to play something like a bit of Sam Cooke and if feels decidedly lacking. To be fair, there’s a fair degree of personal taste at play here, both in choice of music and how one likes it to sound, so we’d advise trying to take one for a spin beforehand, if music is going to play an important part of the 570’s usage in your home. We gave the Subwoofer supplied with last year’s equivalent model a bit of a hard time; it was lacking in presence and never really provided the trouser-shaking thrills we crave. Whilst it’s true that the STB570’s sub isn’t really an earth mover, it definitely seems as though it’s been tightened up a few notches and provided very convincing effects during the numerous battle scenes that punctuate The Hobbit. The sounds of horses hooves beating the turf and swords clashing with shields proved particularly convincing and the localisation of the myriad effects was also impressive. There’s no doubt that if you can arrange the speakers in a more traditional stereo arrangement, i.e. not as a speaker bar but as separates, then you’ll feel the benefit but with the Movie Sound Mode processing engaged, the HB570 was also accomplished in bar formation. In the usual speaker layout, there wasn’t really any need for anything but Stereo, at least to our tastes, but it pays to experiment for your own; and your room.

If your TV is one of the modern breed that’s styled with a metallic bezel, there’s no doubt the SC-HB570 will make for an attractive companion. We’re a bit surprised Panasonic doesn’t offer the unit in a more traditional black colour scheme but at least it shows their committed to their current design ethos. The HB570 comes with a separate unit for inputs and amplification which has the benefit of keeping your setup nice and tidy, due to the lack of cables accumulating behind the speaker bar, but the downside is that you’ll need the room to put it in your unit. The ‘control box’ is a near necessity because of the HB570’s multiple installation options but some will like it whilst others won’t. Probably most irritating, from an operational point of view, is the occasional need to simultaneously press buttons on the remote and control unit to engage/disengage the DSP and we really think Panasonic should add dedicated buttons on the handset, going forwards.

The SC-HB570’s fairly plentiful array of inputs encompass a couple each of digital audio and HDMI connections. Those in possession of a display with ARC functionality will particularly feel the benefit as it means they can open up the possibility of relaying all their TV audio through the speakers, regardless of source. Bluetooth connectivity is almost de rigeur in the product sector these days and the HB570 doesn’t disappoint meaning it’s able to stream music from most smartphones and tablets, plus your PC if it’s capable. Whilst we quite enjoyed a bit of light, background music with the 570, it’s slightly treble-heavy tuning can leave it feeling lacking with anything that’s not electronic based. The SC-HB570 was far more convincing with movie soundtracks, however, with clean dialogue and convincing localisation of effects. The sub, whilst not of ground-pounding class, proved ample succour to the efforts of the main speakers with tight bass and genuinely involving low frequency effects, and the whole package just works for movies and TV.

The Panasonic SC-HTB570 is the very epitome of present day AV product. It’s well connected, sleek and stylish and very versatile. Priced at just under £400, it’s certainly open to a lot of competition but it’s a very worthy contender in an ever-growing market. Recommended.