We get to grips with Panasonic's no-nonsense 46'' Plasma 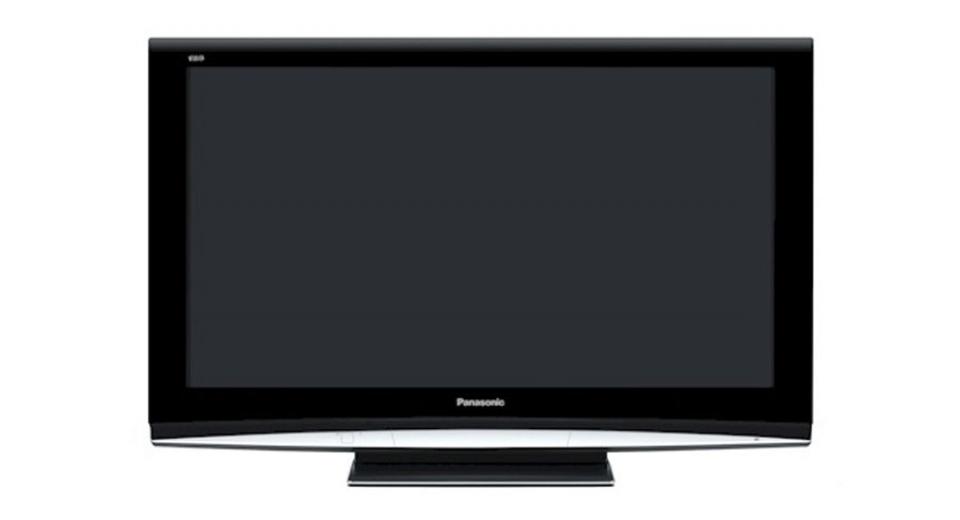 The TH-46PZ80 is one of three screens from Panasonic's PZ80 range of 1080p Plasma Displays. Unlike other ranges, there’s no Freesat tuner, and no “Intelligent Frame Creation” system. If you’re in the same mindset as I am and just want to watch high quality, accurate images from a Blu-ray Disc or DVD player, then you’re probably thinking that shedding such features and getting down to the basics of a great picture would be a great way to snatch a bargain.

Like all of Panasonic’s Plasma displays, the design gives the feeling of a well-made, rugged product, but doesn’t go any further. The unobtrusive design features a thick, gloss black bezel, and a curved silver area with a lift-up flap, which conceals some front panel buttons and additional inputs. Your connectivity options are fairly straightforward: there’s 2 HDMI inputs on the back, whereas the third is under the front flap which is going to look a little messy if you have it permanently connected, but is convenient for the occasional hookup of an HD camcorder. There’s two RGB SCART inputs (the second can take S-Video signals too), Component video and audio inputs, and an analogue RGB PC input.

After starting up and tuning (which didn’t take long), we explored the TV’s menus to get to grips with the image processing options, and their functions. Consistent with the rest of Panasonic’s European consumer displays, there are very few image options in the Picture Menu. This means that there's no user-accessible calibration controls, but it also means that there’s an apparent lack of silly image processing functions, so there's less nonsense to turn off. The top-level adjustment is called “Viewing Mode”, which can be switched between Dynamic (good grief), Normal, Cinema and Eco. We used Cinema as the basis for calibration, because it was the closest to accurate. Each Viewing Mode has adjustments for Contrast, Brightness, Colour, Sharpness, and an option to select the Colour Balance (Greyscale Preset). There are also the redundant “Colour Management” (which isn’t as good as it sounds) and the “P-NR” options. There’s also an On/Off switch for Picture Overscan, hidden in the Setup menu.

Using the “Cinema” mode and the “Warm” greyscale preset as our pre-configured starting points, I did basic setup to the Brightness, Contrast, Colour, and Sharpness controls. This improved the image quality a great deal, and brought things further in line with the standards adhered to by studios, filmmakers, and directors of photography (which should be the goal of anyone purchasing a High Def display). I could spend time describing the aesthetic of the resulting picture with words, but this is ultimately something which is much better achieved with calibration measurements and data:

Correlated colour temperature (leftmost graph) was a little low, which confirmed my observation of the “Warm” setting being a little too red (confirmed by the RGB tracking chart, above middle). Colour accuracy was good, but not spectacular; with greens, as usual, showing the biggest error. A lot of HDTVs tend to push Green towards a neon-bright shade, whereas in reality, it should be a little more subdued.

Service menu access was required to perform further calibration on the TH-46PZ80. This hidden menu allowed us to refine the display’s Greyscale performance (a fairly difficult process, given the design of this menu). Ultimately, we managed to make a noticeable improvement; in fact, we managed to keep Delta Errors below 4 at all times, meaning that the human eye will find it incredibly difficult to spot the slight inaccuracies.

This display doesn’t feature a Colour Management System, but even with only the standard "Colour", we were able to refine the colour accuracy further. Green was still most off target, but the other colours were relatively close, and the inaccuracies present didn’t spoil the picture’s realism, which was greatly affected by the solid Greyscale calibration.

The display’s capability to smooth jaggies (its diagonal interpolation) was fairly good, with few jaggies making it the screen in both the individual tests and the “US Flag” test. Part of the reason for this though, is that the TH-46PZ80U’s Scaling (or Upconverting, in marketing speak) is fairly soft. With standard-def input, pictures didn’t really resolve as much resolution as I’d have liked. In addition, the TV’s Sharpness adjustment is very coarse, so you don’t really have the option of introducing artificial Sharpness to try and compensate.

In my case, I used an external scaler (my AV receiver) to overcome this, and I recommend other owners do the same, for example, by using a high quality upscaling DVD player with the display. As this is a review of the TH-46PZ80U, though, I used this only for comparison, and evaluated the performance of the display’s own processing.

The TV didn’t display Film content optimally: the 2-2 cadence test failed, which simply means that films (or TV shows shot on Film) won’t play back with full resolution or cinematic quality. This is definitely a display that benefits from being paired with a high quality off-board video processor or upscaling DVD player, because it’s an area where Panasonic appear to have skimped for cost.

Since most DVDs aren’t encoded to maximise the resolution offered by the format, real-world material wasn’t too badly hurt by the aforementioned softness. Of course, resolution isn’t everything, and the superior contrast ratio offered by this Plasma display (as well as the phosphor-based display mechanism that the technology provides) gave pictures a truly admirable quality.

One surprise was the quality of Standard-def TV being delivered via Freeview. This is normally the part of the review where I complain about the shocking picture quality being delivered through this platform, and I stand by these statements, but this display really does minimise the ugliness. The surprising quality of Digital TV signals on the TH-46PZ80 seems to be accomplished by some very careful MPEG Noise Reduction (which we don’t have control over), and is aided by the natural “television-like” look of a Plasma panel.

Again using Blu-ray Disc as the highest possible quality source, I picked out some discs to get a subjective view on the display’s performance. The first of these discs was the astonishing “How The West Was Won” (letterboxed version), which, unlike most of Warner Home Video’s high-def output, seems to have been encoded without any compression pre-filter, and is packed to the brim with detail as a result (it resolves detail down to the single-pixel level). The TH-46PZ80 didn’t drop the ball here, and even with only a basic calibration, the image had a beautifully filmic quality.

I decided to be cruel with the next disc, and picked out “Persepolis” from Sony Pictures Classics. This film features 2D animation entirely in black and white. Watching the film on the display is a good subjective test of contrast, but it’s also a good way to spot a small issue which affects some people’s enjoyment of Plasma displays: phosphor trails. Simply put, these appear as purple and green streaks in the image to some highly sensitive individuals (myself included). What I can tell you is that the effect was absolutely minimal to these incredibly picky eyes on the 46PZ80, and in my opinion, was less of an issue than the black smearing common on LCD TVs.

And, true to Panasonic’s word, 24p input was handled correctly, and displayed without judder. Also consider the fact that this TV was not "enhancing" 1080p video with any unwanted image processing, and you're left with an incredibly impressive image.

Fine-tuning Greyscale and adjusting the Colour control put the finishing touches on the already great performance. It was incredibly difficult for me to spot the slightly misshapen colour gamut without an ultra-accurate reference to compare it with. "Persepolis", in particular, now looked black and white instead of black and orange-white!

I was very, very pleased with the performance of this display. Everything about this product screams “no nonsense”, from the design down to the surprising lack of redundant video processing features. Although I was just a tiny bit let down by some aspects of the display’s standard definition video processing, it is completely acceptable at this price point, especially given the display’s other strengths.

Most importantly of all, the TH-46PZ80 puts out a very accurate, problem-free 1080p image, with all the benefits of Plasma technology (namely fantastic contrast and motion resolution). Because it satisfies the most important areas and wastes none of your time (or money) with pointless video alterations, it gains an AVForums Best Buy award.