Although it lacks user control, the TX-P4615 still manages to be another solid NeoPDP-based display from Panasonic. 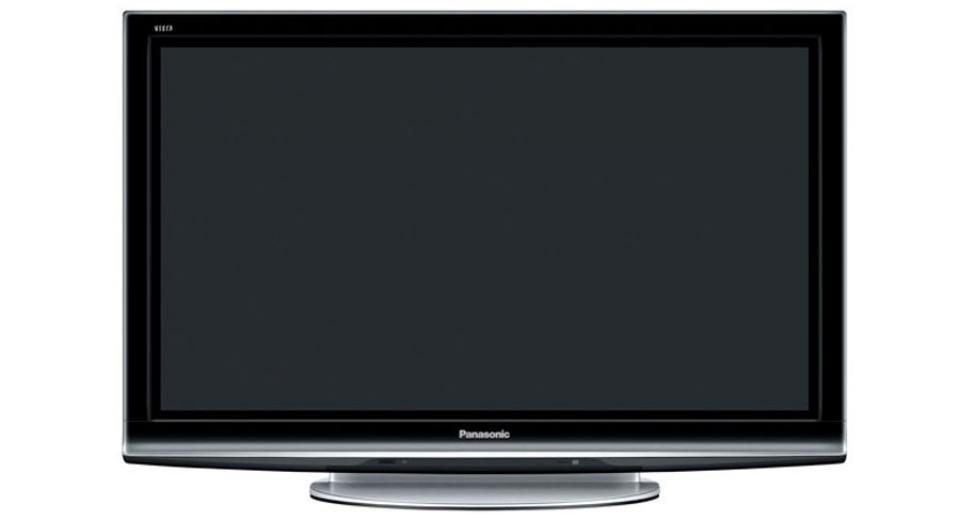 We’ve already reviewed Panasonic’s G10 series NeoPDP Plasma in its 42" iteration, but just to mix things up a bit, we have the 46" G15 model in for review today. In true Panasonic tradition, there’s not a lot of difference between these two displays on paper, but the G15 takes the solid G10 model and adds VIERA CAST and networking features into the package.

VIERA CAST is Panasonic’s web-enabled TV service which grabs content from YouTube, Picasa, Eurosport, and other online sources, and brings them into your living room. Other than this, some minor cosmetic changes, and the additions of DLNA networking and DivX movie playback, the G15 would appear to be much the same as the well-received G10 model. Of course, that’s no bad thing, so let’s explore its performance to find out if this is really the case, or see if you get more for your extra cash.

Whilst the G10 series displays came with a glossy black stand, the G15 features the same "brushed silver" look as seen on the V10 series’ base. Other than this, it’s business as usual - the TV has the same well-built feel, and is framed by a sturdy bezel (in gloss black - groan). The entire screen is covered by a sturdy sheet of glass, which Panasonic claim can withstand smacks of up to four joules - the company’s employees demonstrated said sturdiness for us at their convention in February by hitting the screen with a hammer (it came away entirely unscathed). More practically, this means that the display will be safe even in households with small children, or Nintendo Wii gamers with sweaty palms.

Connectivity is rarely remarkable on HDTVs any more, because just about all of them do the job nicely. That’s true of the P46G15 - there are 4 HDMI inputs, a Component input, analogue PC "VGA" input, 2 SCART terminals (both RGB enabled), and a Composite/S-Video pair on the side of the panel. What is more remarkable though is Panasonic’s commitment to the Freesat brand - the TV has a built-in satellite tuner and can receive any satellite channel, including those marketed under the Freesat name. Since this is the only way to get free HDTV broadcasts in the UK, it’s great to see that Panasonic are building the tuners in to their displays, avoiding the need or a separate decoder.

Also, there’s Panasonic’s usual support for their SD card media, with an SDHC slot. I slotted an 8gb SDHC card given to me by Panasonic to test their recent Blu-ray Disc Recorder with, and sure enough, all of the JPEG images and AVCHD camcorder videos stored on the card were viewable on the TV, too, which is some nice interoperability.

There is also the Ethernet/LAN port, so you can hook the TV up to your home router and use the VIERA Cast and DLNA networking functions.

The 46G15’s menus are of the typical Panasonic variety: barren. In an unfathomably perfect world, we wouldn’t need Greyscale and individual Colour Management controls to squeeze the most out of a television - but in reality, these aspects of the image need to be carefully adjusted, for various reasons. Panasonic are, at the time of writing, the only major manufacturer not offering such control. They’re aware of how demanding users feel about this situation and we hope for good things in the future, but until that time, we have basic controls such as Contrast, Brightness, a single global Colour control, and Sharpness.

We can also pick one of three different "Colour Balance" options in an attempt to get the colour of grey as close as possible to the industry standard. "Warm" is the closest to correct, and the others add a blue wash to pictures, so don't use them. There’s the usual option called "Colour Management", which doesn’t let us manage anything (why do you tease us, Panasonic!)

Finally, our last two picture options are "Eco Mode" (self explanatory), and "P-NR", which is a spatial noise reduction filter. Spatial processing is incredibly ineffective in removing noise, but I find that any consumer-level noise reduction control is best left off, anyway, so it's not a big deal.

Calibration: Before and After

After setting the basic controls that Panasonic give us to set correct Brightness and Sharpness levels, I had a look at some BBC HD 1080i programmes. The Wimbledon games were playing, and were already looking very nice indeed. The NeoPDP panel was retaining a huge amount of clarity during motion: unlike on some slower LCD displays, the tennis ball didn't disappear mid-flight. Additionally, the detailed net in the middle of the stadium didn't flicker or shimmer too much during subtle camera movement, indicating acceptable quality deinterlacing of the 1080i signal.

Here’s the detailed data which was read from the screen in this basic state: The RGB Level Tracking chart indicates that the colour of grey is very, very consistent, and in our sample, was close to perfect out of the box already. This differs from the review sample of the TX-P42G10 we received earlier this year, which had an excess of blue. Panasonic don't feature a "Blue Only" mode on their displays to allow the "Colour" control to be set optimally by eye, so the above measurements indicate the slightly exaggerated colours.

Whilst the Continental European and North American models feature user-accessible Greyscale and Gamma controls, the UK version does not. This makes calibration a royal pain in the backside, because like on the V10 series Plasma, we have to enter service mode, make an adjustment, then exit service mode again to measure the result, because the readings between the two modes differed. We hope that Panasonic will join every other major manufacturer and add a control in the normal user menu on future models.

The only way to influence the Gamma characteristics on the UK version of the P46G15 is to change the top-level picture preset. "Normal" gives a richer look, but produces a fluctuating black level, whereas "Movie" gives a lower contrast appearance with no fluctuation. Interestingly, these results are not the same as the G10 review sample we received. On that particular display, lowering the "Colour" control to tame the high Luminance levels would also desaturate the colours unacceptably, but on the G15, the Hue and Saturation of the colours were not affected as much. This meant that it was possible to get a much better balance between the two.

Panasonic's trademark oversaturated green was still present, but most of the other colours were unusually close to their targets - an excellent result.

Panasonic’s displays don’t feature any sort of film cadence detection, and when fed with a standard-def interlaced signal, the result is quite soft. Jaggies in interlaced video aren’t especially apparent, but this is probably more due to the softness rather than any sort of intentional diagonal interpolation. Yes, this is certainly "minimal effort" video processing here, but if it keeps the price of the TV down and lets Panasonic concentrate on high quality panel components, then I’m all for it, because it can be bypassed in most cases.

Something that frequently confuses people is the fact that the TV’s SD video processing capabilities are irrelevant when you’re feeding in an upconverted source to the TV. Remember that if you’re using an AV Receiver, video processor, or upscaling DVD player, then the TV’s SD processing is bypassed. This is why our reviews of Panasonic’s displays still manage to be almost consistently positive, despite their poor performance in this area.

Of course, the TV’s satellite and terrestrial tuners are internal, and therefore signals from these have to travel through the mediocre video processing before reaching the screen. In the case of 1080i HD from satellite, this is not a huge problem, because either no scaling, or only horizontal scaling, has to be done, depending on the channel (BBC's HD channel is actually 1440x1080, not 1920x1080). The high resolution of the original content also effectively masks any deinterlacing deficiencies.

I have to admit it: the VIERA Cast functionality has grown on me. Normally, I'm a bit cranky when it comes to features like this one, but I've found myself browsing YouTube on the TV more often than I anticipated. It's a little irritating that the Aspect Ratio control is unavailable in this mode (meaning that 4:3 YouTube videos are stretched to fit the 16:9 screen), but I can't imagine anyone will be watching online video for its picture quality, anyway.
The Media Server functionality will also find its fans. I've been informed that the version sold in shops comes with a code, allowing users to download software called Twonky Media. I downloaded the 30-day trial version and, sure enough, I was able to browse through most of my JPEG, MP3 and AVI files on the TV on the first attempt. This surprised the living daylights out of me, because although I consider myself a computer nerd, networking never ceases to give me a headache. After spending hours and hours trying and failing to get similar functionality on my Xbox 360 (before my console died, that is), the first-time success I had with the TwonkyMedia Manger software and the VIERA TV was a complete relief.

As with all of the 2009 Panasonic Plasmas, there is no perceivable input lag, at any time. With an Xbox 360 connected, I was given the option of selecting a "Game" picture preset, but this simply appears to be yet another choice of gamma characteristic, and doesn't affect the already excellent responsiveness. Gaming is great fun on this display as a result of this – miles away from certain laggy LCD displays that I've recently used.

I pulled out the Blu-ray rerelease of Joss Whedon's Serenity for some more real-world testing of the P46G15. This is really, really nice demo material for just about any high quality display, as this beautifully shot film has been transferred and encoded in a way that retains maximum detail. It's full of high contrast scenes, strong, often colourful lighting (which is reproduced by the TV faithfully enough so that it doesn't become an eyesore), and fast motion. It looks wonderful, and thanks to the fact that the display handles the 24p input correctly, there's also no judder to take you out of the action.

Standard definition channels from the digital satellite and terrestrial tuners looked decent, but not amazing. Panasonic's video processor is not great at handling 576i material, but because this footage is rarely great-looking to start with, it's not a huge loss. One slightly annoying feature of this television is that when you have Subtitles turned on, the video display is forced to 16:9. That's no problem if you're watching a subtitled widescreen programme, but if you want to see subs displayed over a 4:3 broadcast, then you'll have to put up with a distorted video display. What's odd is that the TV doesn't even inform you of this limitation, and simply appears to ignore the command: it took me a good hour or so before I actually noticed why my button presses were having no effect.

Months after their first appearance, the quality of Panasonic’s NeoPDP panels is still obvious. Although the overall picture quality of the TVs they’re fitted to is slightly curtailed as a result of the somewhat dumbed-down menus (something we hope Panasonic will fix on future models), this isn’t enough to cancel out the advantages of NeoPDP Plasma display technology: high contrast, very deep black level, perfect viewing angle performance, and high motion resolution. Additionally, the G15 we received had absolutely excellent Greyscale and Colour characteristics, which helped picture quality tremendously after calibration. The end result of all of this is another Highly Recommended NeoPDP display.