Three birds with one stone? 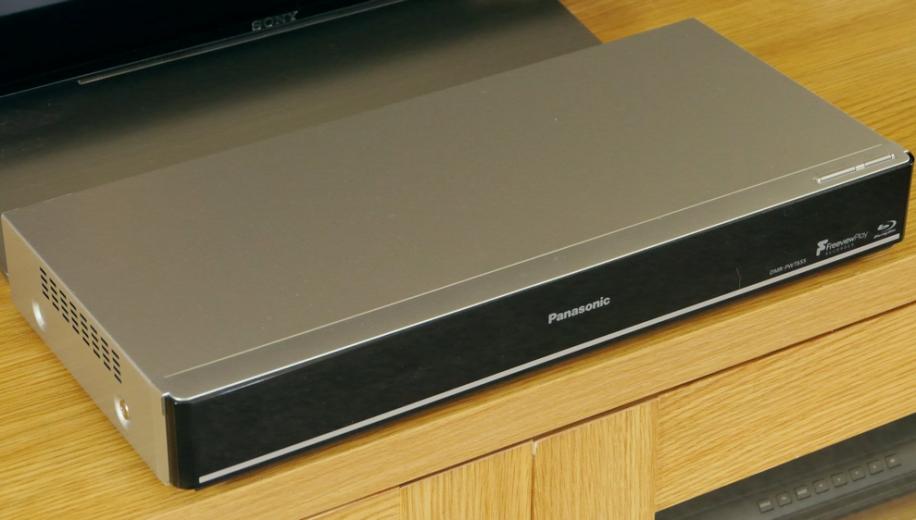 What is the Panasonic DMR-PWT655?

This multi-functional device combines Blu-ray and DVD playback, Freeview HD recording and Smart TV features in one box. The PWT655EB is Freeview Play branded, meaning you get all the catch-up content from the stables of ITV, Channel 4 and the BBC, as well as a time-travelling, backwards scrolling guide to, hopefully, make finding all the previously aired programming easier to find, There’s a one terabyte (1TB) hard drive built-in, which according to Panasonic allows for the recording of 684 (nice & precise) hours of high definition recording and it's also capable of playing networked and locally stored content in Ultra HD, as well as scaling content to 4K resolutions. Note, the DMR-PWT655EB is not an Ultra HD Blu-ray player, for that you will need to look at Panasonic’s UB8900. With current (June 2016) online prices of around £229, this combo device looks like representing very good value, let’s see how it fares in action.

Unlike many of the Blu-ray players we get in for review these days, the PWT655 is what we’d term full-sized with dimensions of (WxHxD) 430 x 59 x 210mm. The casing is nearly all metal and the build quality feels solid while there’s a semi-transparent, tinted black plastic drop-down flap at the front which conceals a tray loading disc mechanism and a visual display panel to the right of that. Just above and to the right of the display, on top of the chassis, are buttons to power on and off and to open and close the disc tray. The PWT655 is nice and quiet in operation, both when playing a disc and recording to the hard drive. The facia conceals a USB 2.0 port and an SD Card slot which are designed for media playback, while the rest of the connections are around the back. The rear connection plate has RF in and RF out for hooking up your aerial and taking the Freeview signal to other devices, respectively, while next to those are HDMI 1.4 and LAN ports, a further USB input and a coaxial digital audio output. The DMR-PWT655EB also features built in dual-band Wi-Fi capability. As befitting a multipurpose device, the remote control is replete with plenty of buttons, with the most used of them positioned centrally. There are three buttons we used quite a lot with the personal video recorder (PVR) functionalities near the bottom, namely those for ‘time slip’ and 'manual skip' which, as the names suggest, allow you to breeze through content with ease without the need to use the, comparatively slow, fast forward or rewind buttons. There are also dedicated buttons for Netflix and Freeview Play that take you directly to all the associated streaming services.

As per our previous, and recent, experiences with one of Panasonic’s star attractions, TV Anywhere, our attempts to get it working ended in failure. As the name suggests, TV Anywhere is a feature designed to allow you to set and access recordings anywhere you have an internet connection but it seems, to us at least, like there are major problems with it. To use it necessitates the downloading of the Panasonic Media Centre app (iOS & Android), the creation of an account and a connection procedure with the player. Unfortunately, we couldn’t even get the app to sign in this time and having spent hours attempting to get it to work on the previous review sample, we have to admit throwing in the towel relatively early this time as life is just too short for these kind of frustrations. Fortunately, we had a better time with the DLNA serving capabilities of the PWT655 which allows you to access the recordings (or anything stored on the hard drive) from other devices, albeit on the same network. There are plenty of apps available on the Diga Marketplace, including two of our favourites, Netflix and Amazon Instant Video but, unfortunately, with both you are locked in to a 60Hz video signal output when, in an ideal world, this would automatically change depending on the framerate of the content. In simple terms, the upshot of that is you won’t always be seeing content displayed as smoothly as you might if the refresh rate would switch. The implementation of Freeview Play, in terms of the catch-up apps – iPlayer, ITV Hub & All 4 – is very handy but using the 7 Day scroll-back Electronic Programme Guide (EPG) is rendered cumbersome by the fact it is generally very slow to load in the programme information; in fact, at times, we saw the ‘no information available’ message displayed when trying to go backwards or forwards, within it, for as little as a day so something needs to be done with the software to make it load both more quickly and reliably. We're also a little bit mystified as to why Demand 5 is missing in action from the Freeview Play app line-up; the system software was up to date

The DMR-PWT655 will treat your old standard definition material with a good degree of reverence. Scaling is excellent and the player is fully able to detect the necessary film cadences and is equally fine at deinterlacing any video material you send its way. There is no apparent detail suppression or nasty ringing artefacts and when the source is good – particularly with high quality animated titles – the output of the PWT655 is about as good as you could hope for without getting a costly outboard video processor involved.

As with just about all Blu-ray players on the market, the PWT655 produces an exemplary high definition output in both two and three dimensions. Provided you leave it in the default ‘Standard’ Picture Mode, there is no unnecessary processing, no issues with colour or any unwanted, backdoor noise reduction. Movies shot at 24/23.976p (that make up the overwhelming majority) are handled flawlessly but even those rare 1080i60 discs provide beautiful images, thanks to the PWT655’s excellent video deinterlacing capabilities

In all honesty, unless you’ve bought a really cheap Ultra HD TV, you’re unlikely to see any real benefit in the Ultra HD scaling algorithms present in the DMR-PWT655EB, at least with real world content. We could, perhaps, see a slight improvement based on a couple of test patterns against the Sony XD93 displaying 1080p content but if there were any, it was marginal at best and we certainly wouldn’t recommend anyone purchase the player based on this feature alone.

As a disc player, it's hard to fault. As a Freeview recorder, the PWT655 has its share of foibles but nothing deal-breaking

Having just reviewed the HWT250, the recording and general PVR performance of the PWT655 provided no surprises as they were identical in all respects. There are some good features but also a couple of nuisance factor restrictions, although certainly nothing we’d class as deal-breakers. Like every PVR worth its salt, the PWT655EB is capable of creating series/season links, where you can choose to record programming whenever it’s being broadcast. Naturally, you can also record programmes singularly and also by ‘one-touch’ using the record button on the remote. We put the PWT655 through its paces with a mixture of single and season records without tripping up once, which gives us the reassurance that this is a solid Freeview recorder.

The new generation of Panasonic’s are better at dealing with timer clashes than the older PVRs. In the event you try and schedule more than two concurrent events, you will be transported to a screen where you have the opportunity to alter or delete one of the overlapping timers, or even just keep it as is, and have one curtailed before it has ended. In an ideal world, as with at least some of the Samsung PVRs, you would be offered alternative times but at least you will be given adequate warning by the PWT655. As per YouView, and possibly others, we would also like to see the Panasonic recognise when a standard definition recording has been scheduled and offer up an HD alternative, should one exist. There is a little box at the top of the EPG that shows you the text ‘SD>HD’ but it’s hard to see and a pop-up message would be much better.

As we alluded to above when describing the remote control, two of our favourite features of the DMR-PWT655 are related to ‘time slip/skip features accessed from buttons at the bottom of it. As well as the minus 10 second and plus 60 second buttons, there’s also the chance to skip backwards, or forwards, in user-defined segments at minute intervals using the TIME SLIP button, which is really useful for getting through the adverts or through large segments of recordings/chase play viewings.

While the PWT655EB is a good Freeview recorder, there are certain things we’d like to see improved and/or refined. One thing that got on our nerves – although instances where it happens are relatively rare – is that you can’t pause a channel you are recording when both tuners are being used to record; you’re forced to go in to the Video Menu, hit the Play button and then you can. Also, pausing of ‘live TV,’ in general, feels sluggish and it can take up to three seconds for the player to react to the button press leaving you feeling as though it might not have received the infra-red command. You are also unable to alter any settings while a recording is taking place and using the EPG when watching a previously recorded event sees you placed back in to live TV upon exit; it’s sometimes useful to be able to see what’s coming on later or schedule another recording while watching one so we’d like to see this addressed also.

Specifically, as a one box solution to kill two – and arguably three - birds the Panasonic DMR-PWT655EB is certainly one we’re very happy to recommend. As a Freeview Play enabled personal video recorder, the Panasonic is a steady and reliable performer capable of capturing two programmes simultaneously, season links and chasing play, i.e. watching a recording before it ends, with no fuss whatsoever. It does have some foibles in this department, such as not being able to access settings when recordings are taking pace or being able to effectively use the programme guide while you’re watching one but there’s nothing show-stopping or genuinely annoying.

As a Blu-ray and DVD Player, the PWT655 is even better with faultless replay of both 2D and 3D video and high quality video processing ensuring you’ll be seeing images at their best. The build quality and connectivity options are also good, so it’s thankfully near silent during playback and you can hook up to the vast majority of equipment with ease. There is also a very good selection of video on demand and streaming apps, although we were a little surprised Demand 5 was absent from the Freeview Play roster. All things considered, however, the Panasonic DMR-PWT655EB represents very good value for money with an attractive set of features and functionalities so is well deserving of its AVForums Recommended Award.