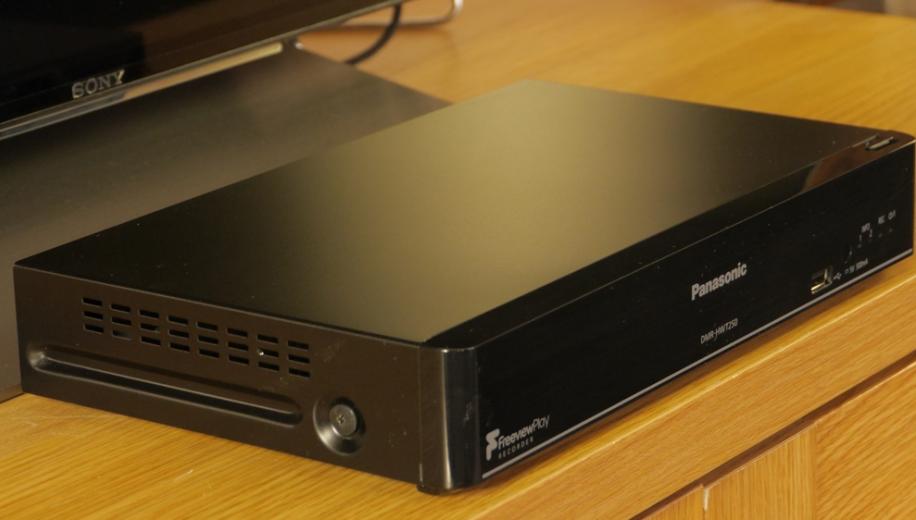 What is the Panasonic HWT250?

The Panasonic HWT250EB is among the first batch of their Personal Video Recorders (PVR) to feature Freeview Play functionalities, meaning it has a seven day scroll back electronic programme guide (EPG) and integration with all the major UK catch-up services, including BBC iPlayer, ITV Hub, All 4 and Demand 5. Other ‘special’ assets of the device include play back of 4K content, a ‘TV anywhere’ app, network integration and video streaming services including Netflix and Amazon. Naturally, the HWT250 also possesses all the usual features you would expect from a digital recording device, such as series link, pausing live TV and recording two programmes simultaneously courtesy of a built in 1TB (terabyte) hard drive which allows for the storage of around 700 hours of HD programming. At the time of review (June 2016), you can pick up the Panasonic DMR-HWT250EB for £229 so let’s check out if its capabilities justify the asking price.

The HWT250 is essentially a compact, black box mostly cased in plastic but the side and rear panels are metallic. With dimensions of 300 x 52 x 190mm (WxHxD) it will squeeze in to even fairly tight spaces. In all honesty, the build quality doesn’t feel anything special owing to its lightweight chassis but it’s nice and quiet during operation, despite the fact there’s a fan inside. The reflective front panel doesn’t have a display but there’s a little feedback on activity provided with some tiny LEDs in the bottom right-hand corner informing you when recordings are taking place and if the device is powered up or in standby. The majority of connections are on a panel at the rear and, from left to right, include an HDMI 1.4 port, a coaxial digital audio out, a USB 2.0 input, a ‘fast’ (100Mb) Ethernet connection and the terminal for your aerial cable, as well as an RF out if you additionally want your TVs tuner to have a feed. There’s another USB port on the front, as well, which is probably the one you would choose for playing back media from attached storage. The remote control has plenty of buttons but is well thought out and most of the important features are easily accessed at the centre. A big plus, for us, are the 10 and 60 second skip buttons that make advert breaks, from recordings or chase play, a breeze to go through. Netflix subscribers will also be pleased to see a direct access button to the streaming service located toward the top. There’s also a dedicated Freeview Play button which takes you straight to all the catch-up players. Initial setup was very easy and once you’ve negotiated the speedy channel tuning, network initialisation and software update processes, you’re good to go. The main Menu – accessed via the Function Menu button on the remote – provides a tiled style interface with 9 clearly labelled sub-menus. There’s an instruction manual included in the box so we won’t bore you with the details as we think the menu system is easy enough to find your way around. One thing you may want to do, for the smoothest user experience, is to make sure Quick Start is enabled in the ‘Others’ section of the Setup Menu as it makes boot-up almost instant. Unfortunately, despite numerous repeated attempts, we couldn’t get probably the most exciting feature of the HWT250EB, TV Anywhere, to work. The process involves downloading the Panasonic Media Centre app to your mobile device (iOS & Android), registering for an account with Panasonic and then registering the device to the account. Initially, we couldn’t even get an account as the website was down but even once it went through that an unspecified ‘communications error’ occurred when trying to link the HWT250 to the account. This isn’t the first time we’ve had issues with this process, either, as it happened with previous players and recorders we’ve had in for review. In theory, TV Anywhere allows you to set and access recordings anywhere you have a network connection but if the intermediary server isn’t reliable we’re afraid to say it is of limited use.

We had much more success with the DLNA serving capabilities of the HWT250 which allows compatible devices on the same network to access the contents of the hard drive - including all the recordings made from the Freeview tuner – and play them back. There’s also the DIGA ‘Smart TV’ platform which has a decent range of apps, including YouTube, Netflix and Amazon Instant Video available to install. Playback from the apps is reasonably good but, unlike some, doesn’t allow for automatic framerate switching so any ‘24p’ content – most movies and major US TV series – is output at 60Hz which means you might see a judder on the likes of panning shots. You can’t even manually force a 24p output either which is a bit of a shame. On a more positive note, we’re pleased to see that Panasonic has cracked the problem of using streaming services while recordings are taking place but you still can’t get in to the menus in that circumstance, which can be irritating. The Freeview Play implementation is decent but the scroll back guide, which allows you to view programming from the last 7 days and access it via the relevant catch-up service, is slow to load. We saw similar, although slightly better, performance from the previous Freeview Play PVR we reviewed so it might be a software issue; we would have thought it would be fairly easy to implement caching of the guide information to the internal memory so we’ll be looking out for improvements in this department going forwards. Unlike the performance with Netflix and Amazon, the video signal for the UK services was correct at 50Hz, which is good.
It's a very solid recorder with some nifty little features

The Panasonic DMR-HWT250EB is a solid personal video recorder with a few nice little features as well as a few mildly irksome limitations. The BWT250 is, of course, perfectly capable of creating series links (i.e. where you can choose to record a programme whenever its broadcast), in just a couple of button presses. Additionally, it can perform one-touch recordings that will record the currently viewed channel until its scheduled ending or for a nominated time, should you prefer, which can be useful if it’s a live event, e.g. a football match going to extra time, that might overrun. It is also possible to ‘chase play’ on a presently recording channel, i.e. you can watch from the beginning before the programme has ended. We tested the player with more than thirty recording events and it performed with complete reliability so you should be able go on your holidays with the confidence that you’ll be able to catch up with your favourite shows on your return.

Dealing with timer clashes is also much better handled than with previous generations of Panasonic PVRs; should you try and schedule more than two concurrent events, you will be taken to a warning screen where you get the chance to alter or delete one of the overlapping timers. It’s not quite as slick as some systems that will offer up alternative times for the same programme but at least you get a fair chance to change things. We would also like to see the software flag up that a high definition version of a programme you set to record on a standard definition channel exists, where applicable. That information is present at the top of the EPG in a little yellow/orange box containing the text ‘SD>HD’ bit it’s hardly very obvious.

Two of our favourite features of the DMR-HWT250 are related to ‘time slip’ features accessed from the remote control. As well as the minus 10 second and plus 60 second buttons, there’s also the chance to skip backwards, or forwards, in user-defined segments at minute intervals using the TIME SLIP button; so, for instance, if you wanted to get to the 2nd half of a recorded football match, you would enter 45 minutes and the box will take you there. It works very nicely and means you never have to be subjected to adverts if your viewing is time shifted.

There are some inevitable niggles with the HWT250EB; firstly, pressing the GUIDE button, during playback of a recording sees you thrown unceremoniously back into ‘live TV’ on exit. It’s easy enough to resume a recording from the last viewed point but, still, it’s slightly annoying as we like the capability to be able to set recordings, even when viewing one. Another slightly galling limitation is that the HWT250 won’t allow you to pause a channel you’re recording when both tuners are being used to record. Instead you are required to go in to the Video Menu, hit Play and then you’re able to pause. Speaking of pause – and more a slight grumble than something that needs real attention – is that pausing any Live TV seems to take a lot longer than it should; it’s probably only a matter of 2 to 3 seconds but compared to most other PVRs it feels decidedly pedestrian.

The Panasonic HWT250 is a more than capable personal video recorder with the added benefit of integration with the (fairly) recently launched Freeview Play service. What that means, in practical terms, is that you get access to all the major UK catch-up platforms from the BBC, ITV as well as Channels 4 and 5, plus a ‘scroll-back’ 7 day EPG allowing you to easily find content to watch through them. There are also a good range of apps, although services such as Amazon and Netflix don’t play as smoothly as with some players. Connectivity options are adequate and build quality is good enough, with the DMR-HWT250EB nice and quiet during operation. You also get a 1TB hard drive which is enough for nearly 700 hours of high definition programme recording. In terms of its abilities as a personal video recorder, the Panasonic is very solid and reliable and it has some nice features for skipping through content you don’t want to watch, i.e. the adverts. There are a few drawbacks; the programme guide is slow to load, as is pausing live broadcasts and you can’t useably view the guide when you’re watching a recording but they aren’t serious enough negatives to prevent the HWT250 from earning an AVForums Recommended Award.

The Humax FVP-4000T is another Freeview Play enabled PVR with, obviously, very similar capabilities to the Panasonic but, in the right circumstances, trumps it by being able to record up to four programmes at once, although for us the remote is not as nice and it also suffers from a slow loading EPG. The YouView platform is very similar to Freeview Play but is more mature and has more catch-up apps; a notable player using that software is the Humax DTR-T2000, which is slicker in operation than both but lacks manual editing of timers. For something a little more left-field, you could consider the VBox TV gateway which brings almost unrivalled flexibility but it isn’t really aimed at users without a bit of technical nous.