Quality performance on a budget 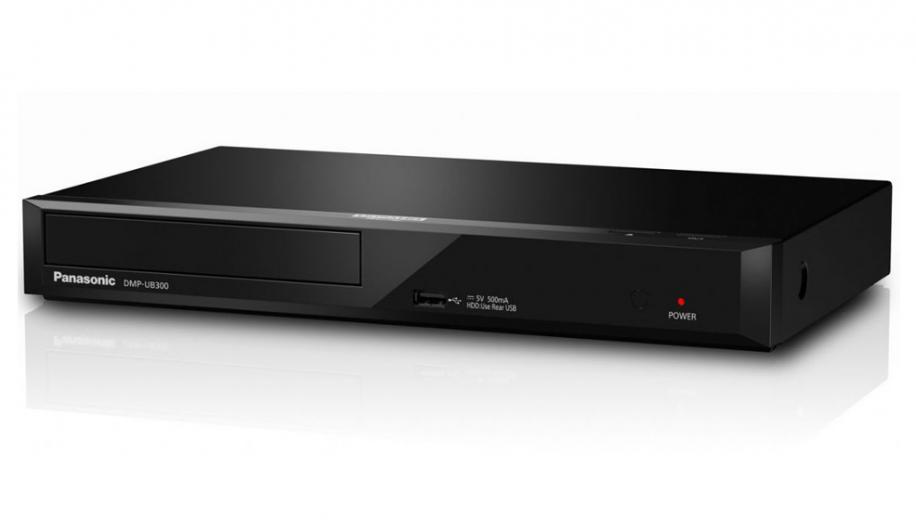 What is the Panasonic UB300?

Panasonic's new DMP-UB300 Ultra HD Blu-ray player is a clear attempt to generate some mass market appeal for the developing format by hitting a key psychological price point. Previously the Xbox One S was the cheapest way of buying a UHD disc spinner but new models and recent price drops have resulted in standalone players becoming available for around than the Xbox's £200 asking price. The UB300 has list price of £249 but if you shop around you can pick it up for as little as £188 which makes it the cheapest available 4K player by some margin (June 2017). Of course Panasonic have had to strip away quite a few features to hit a sub-£200 price point but with the same chip set and processing as its more expensive siblings there shouldn't be any detrimental impact on the audio and video performance. So let's see if the UB300 really is the bargain that it appears to be on paper. The UB300's entry-level status is apparent as soon as you look at the player with a simplified appearance compared to the other UHD players in Panasonic's range. Although the dimensions are the same, the construction isn't as solid as the more expensive DMP-UB400 and the drop-down flap at the front has gone, leaving a simple glossy black box with a disc tray to the left and a USB 2.0 port in the middle. On the right hand side you'll find eject and power buttons, the IR receiver for the remote control and an LED power indicator but, just like the UB400, these's no display. The build quality of the UB300 is reasonable considering its price point and it measures 320 x 45 x 193mm (WxHxD) and weighs in at 1.3kg.
The UB300 has a stripped down appearance compared to its more expensive siblings It isn't just the front panel that has a stripped down appearance, the same is true of the rear. Aside from the flagship DMP-UB900, none of Panasonic's 4K players have analogue outputs but the UB300 also loses the second HDMI output and the optical digital output. This leaves the player with a single HDMI 2.0a output that supports 4K, HDR, Rec. 2020 and HDCP 2.2, which won't be an issue as long as your equipment also supports those features. However if you have an older soundbar or AV receiver that doesn't support 4K, HDR, Rec. 2020 and HDCP 2.2, then the UB300 isn't the player for you. The UB300, along with the UB400, also includes a second USB 3.0 port which isn't found on either the DMP-UB700 or UB900, along with a LAN port but, unlike Panasonic's other players, it doesn't have built-in WiFi. So, unless your router is near the UB300, you'll need to use a wired connection either via power line adapters or by running an Ethernet cable directly to the player. The UB300 comes with the same redesigned remote included with the UB400 and we like this new controller. The black plastic body has the same dimensions and basic layout as the older remote, which means the navigation buttons are slightly unbalanced and there's still no backlight, but it has all the buttons you'll need and even a couple of new ones. There's now a dedicated HDR Settings button to directly access the HDR presets and a handy Playback Info button so you can quickly access information about how the disc was encoded (resolution, colour gamut, bit depth etc.) and what the player is actually outputting.
There's a single HDMI output and no built-in WiFi but the same excellent remote as the UB400 Despite the lower price tag and stripped back look of the UB300, it appears to retain many of the same features as the other players in Panasonic's range and crucially it has the same chipset and processing. So the UB300 can playback 4K Ultra HD Blu-ray discs, which means it supports a resolution of 3840 x 2160, as well as the HEVC codec, 10-bit video, Rec.2020 and HDR 10. It can also playback 2D and 3D Blu-ray discs, along with DVDs and CDs, and it includes Panasonic's 4K High Precision Chroma Processing, Direct Chroma Upscaling and 4K 60p/4:4:4 output. The UB300 supports Hi-Res Audio and is certified as Ultra HD Premium by the UHD Alliance but like all of Panasonic's UHD players it doesn't support Dolby Vision. The UB300 uses the same operating platform as the other Panasonic players with an elegant home page that allows access to all the main features including Videos, Music and Photos. If you want to stream content from your Home Network you can do so via a wired connection and we found in testing that the UB300 streamed content very effectively and offered an extensive range of file support that includes AVCHD, MKV, FLAC (192kHz/24bit), WAV (192kHz/32bit), ALAC (192kHz/32bit), DSD (2.8MHz and 5.6MHz), WMA, AAC, MP3, JPEG and MPO. It also supports Network Services and whilst the range of apps isn't exactly comprehensive, it does include the 4K HDR video streaming services from Netflix and Amazon.

We should start by saying that despite the cheaper construction, the UB300 is still relatively quiet in operation, although the disc tray is a bit noisier than the UB400. As with Panasonic's other Ultra HD Blu-ray players there is a fan at the rear but we couldn't hear it when the UB300 was in operation. The player was also very quick at loading 4K Blu-ray discs with times ranging from 30 to 40 seconds depending on the title.

Panasonic have publicly stated that all their Ultra HD Blu-rays players use the same chipset and processing which means that, despite what you might read elsewhere, they deliver exactly the same image. This is common sense really, if a player is reading a digital signal off a disc and outputting it digitally via HDMI then assuming it isn't doing anything it shouldn't, the image must be identical. Ultimately the signal is composed of ones and zeros, so any reviewer who claims they see incremental differences in picture quality between the UB900 and UB300, for example, is simply talking rubbish. However we did check Panasonic's claims using the same setup, test discs and calibrated displays and we can confirm that the UB300 performed identically to the UB400, UB700 and UB900 that we also tested. This is great news for anyone buying the UB300 because, despite Panasonic removing certain features to reach a lower price point, they haven't compromised on image quality.

As with all of Panasonic's players the UB300 includes the ability to select the bit depth of the output, which is great news for owners of older 4K HDR TVs. Previously Panasonic UHD players output everything at 12-bits which could result in banding on some older TVs but now you can choose Auto (10-bit Priority), which means that when the player detects an older display it automatically outputs at 10-bits. A new feature, which is actually exclusive to the UB300 and UB400, is HLG to HDR10 conversion which converts the broadcast version of HDR called Hybrid Log-Gamma into HDR10 for TVs that don't support HLG. We're not entirely sure how much use this feature will actually be in reality but it does show that UB300 includes the very latest Panasonic image processing.

Another new feature is called Dynamic Range Adjust which you can access either from the menu or directly via a dedicated button on the remote control. This feature addresses the problem of HDR content appearing dim in rooms with excessive ambient light and provides the option to brighten the HDR image. There are four settings – Standard (0), Natural Environment(4), Light Environment (8) and Bright Environment (12) – and in testing we found that the feature actually worked, using non-linear processing to brighten the average picture level (APL). The feature was able to increase the APL without clipping the highlights using the Natural Environment setting but we felt that too much detail was lost with the other two settings. So we would recommend sticking with Standard when possible and then perhaps using the Natural Environment setting if necessary. Although there's also a sliding scale from 0 to 12, so you could maybe choose 5 or 6 as an alternative.

All Ultra HD Blu-ray players can convert high dynamic range (HDR) content to standard dynamic range (SDR) content when connected to a non-HDR 4K display. As with the other Panasonic models, the UB300 proved highly effective, providing flexibility in terms of a down-conversion process that reduced the dynamic range without crushing blacks, clipping the whites or over-saturating the colours. The playback of regular Blu-ray discs, either 2D or 3D, the UB400 was identical to its siblings, with detailed and accurate images and video processing that effectively scaled 1080p Blu-rays to a 3840 x 2160 resolution with no apparent artefacts. The same was true for standard definition DVDs and the player also handled streaming video services like Netflix, Amazon and YouTube very well, side from not automatically outputting at the correct refresh rates, which was restricted to 60Hz.

Finally the UB300 performed very well in terms of digital audio with an HDMI low clock jitter process and Hi- Res audio support up to 192kHz/32-bit, along with the ability to decode or bitstream Dolby Digital, Dolby Digital Plus and Dolby TrueHD, as well as DTS-HD High Resolution and DTS-HD Master Audio. Which means that if you have a suitably equipped soundbar or AVR you can bitstream the audio and enjoy the Dolby Atmos, DTS:X and Auro-3D soundtracks found on many Ultra HD Blu-rays.

The UB300 is an interesting player that despite its stripped-down appearance manages to offer an excellent audio and video performance over HDMI at a previously unthinkable price point. By breaking through the psychological £200 barrier the UB300 will hopefully help promote awareness of 4K Ultra HD Blu-ray beyond the AV enthusiast and, in the process, create greater mass market appeal. If you're looking for a cheap UHD Blu-ray player then the UB300 obviously fits the bill with an identical audio and video performance compared to Panasonic's other 4K disc spinners and a decent set of features that includes hi-res audio support and 4K HDR streaming services. It isn't as pretty or well made as the other players in Panasonic's range and there's only one HDMI output, no optical digital output and no built-in WiFi but if none of that matters to you then it's a definite bargain. Like all of Panasonic's players the UB300 neither supports Dolby Vision nor auto-corrects the refresh rates on video streaming services but otherwise it's hard to fault the DMP-UB300 considering its price, making the budget player an obvious Best Buy.

If you're looking for a standalone Ultra HD Blu-ray player for less than £200 then the UB300 is the only game in town but if you can afford a little more then you do have options. Aside from the Xbox One S 500GB which you can pick up for £200, there's the Samsung's UBD-K8500 at £220 which, apart from being a great player, also has a nicer design than the UB300, better build quality, twin HDMI outputs, built-in WiFi and it auto-corrects the refresh rates on video streaming services. If you can afford £240 then you could also consider Panasonic's DMP-UB400 which is not only more attractive and better made but also has twin HDMI outputs, built-in WiFi and comes with a free Ultra HD Blu-ray disc. However, since there is no difference between the UB300 and UB400 in terms of disc playback, if you're looking for a standalone 4K Ultra HD Blu-ray disc player but you're on a very tight budget then the Panasonic DMP-UB300 is a no-brainer.