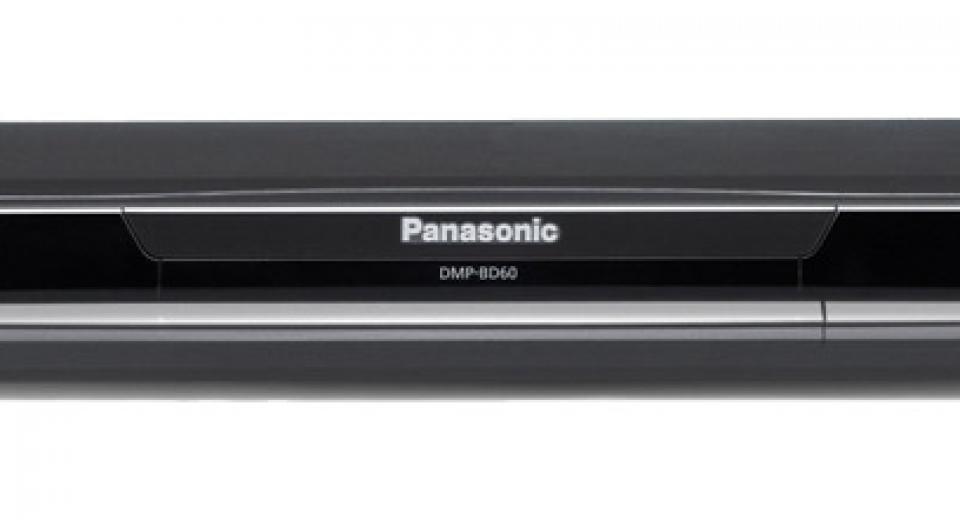 The DMP-BD60 is Panasonic's new entry-level Blu-ray Disc player. Like last year's DMP-BD35, the machine is small, fairly fast, and features full Blu-ray Profile 2.0 support (meaning that it supports features like BD Live internet connectivity and Picture in Picture video, for those discs which feature in-vision video commentaries). The only initially visible differences compared to last year's model are the inclusion of a USB 2.0 port on the front of the unit, and Panasonic's new VIERA Cast feature, which lets you view web-connected services like YouTube and Picasa image sharing through your TV. Selected models from Panasonic's latest VIERA TVs also include the VIERA Cast feature, but it's replicated here in the DMP-BD60 for those who don't already have access to it.

The styling is almost indistinguishable from last year's model: the unit is is a slim, black affair with a shiny exterior. The only real difference is that the disc drawer flap has a slightly different shape to the squared version on the older machine. Connectivity remains unchanged, too: the back of the machine features an HDMI A/V output, a LAN port, Component video outputs, a Composite video output (who knows why), analogue Stereo audio outs, and an Optical audio output for AV receivers that can't accept audio over HDMI. The player can output all of Blu-ray's audio formats (Dolby Digital, Dolby Digital Plus, Dolby TrueHD, DTS, and the DTS HD formats) as-is (Bitstream), or expanded to PCM.

The image quality on 1080p/24 Blu-ray movies was as I've come to expect from most well-designed machines (and indeed, from Panasonic's) when outputting to a 1080p display: as perfect as the source allows. Any flaws in the image will be present in the disc itself or, much more frequently, in the display device. Of course, the DMP-BD60 stays with tradition and features a selection of basic image adjustments which the user can use to make the image slightly less than perfect, if they so desire. Selecting the “User” mode and highlighting “Picture Adjustment” allows for alteration of Contrast, Brightness, Sharpness, Colour, Gamma, as well as Temporal/Motion Noise Reduction (called “3D NR”) and Single-frame/Frequency cut-off NR (“Integrated NR”) controls. I had no need or desire to use any of these, so left them all at the '0' setting, as such adjustments are best made on the display and not the player. Or in the case of the noise reduction controls, not made at all.

There's also an option for cadence detection (labelled as “Progressive”), which for some reason, appears even when 1080p discs are being played. What's stranger is the fact that it actually has an effect on the picture. If you set it to “Video”, the player will throw away resolution and introduce jaggies on movement, but leaving it at “Auto” or “Film” will treat the content as Film and avoid any deinterlacing.

During a recent talk with Panasonic engineers, AVForums were shown some examples of the video processing capabilities of the Uniphier chip, which lies at the heart of Panasonic's BD players. It's an incredibly neat piece of engineering: this one tiny chip controls the player's drive operations, AV decoding, AV processing, and more. Rather than mystify us with evocative claims of high-end majesty, Panasonic's engineers proceeded to show us actual examples of real, technically plausible performance improvements, which this chip brings to players. One of these was the high quality 1080i-to-1080p deinterlacing process. Although just about every single Blu-ray title is encoded at 1080p/24 and really only needs to be decoded and passed on to the display without intervention, the engineers made the valid point that 1080i content (such as music concerts and interlaced TV shows) will become more common as the format becomes more and more popular.

There are two basic possible scenarios when it comes to 1080i content on Blu-ray. One is that the content was originally shot on Film (or on a device with Film-like motion) which has simply been edited and treated as Interlaced; a plausible scenario in the case of material destined for television rather than cinema. The other is that the content was shot using video cameras, and both Fields of the interlaced signal contain unique motion (50i or 60i). The BD60 handles both scenarios very competently, as was evidenced when it was fed the 1080i tests on the Silicon Optix HQV High-def Benchmark BD. The Video Resolution Loss Test had absolutely no untoward issues, as the BD60 correctly identified and processed the moving parts of the picture, leaving the static background untouched. It also quickly found its feet when shown the Film Resolution Loss Test, locking on to the correct cadence and processing the video correctly with only about half a second of delay. And, the “Jaggies” tests were about as free of blemishes as one could hope for on an inexpensive machine (in other words, very good, but not at the highest possible end of the scale). Playback of DVD titles was great, although as with older Panasonic BD players, I found that the “0” Sharpness setting (entirely suitable for Blu-ray titles) was a little too harsh for DVD, and only served to emphasise high frequency mosquito noise in the image (I dropped it to -2). Of course, I had to set this back to “0” to avoid blurring Blu-ray movies, once I was finished with DVD playback. It'd be nice to have individual picture presets for DVD and Blu-ray on a future player to avoid this little annoyance.

The quality of the scaling/upconversion is good. The Uniphier chip appears to use a more standard linear process, as opposed to an edge-adaptive algorithm, like you'll see in the Playstation 3 and Sony's own ES-Series Blu-ray player. Both of these approaches have their merits (the latter sometimes makes more convincingly HD pictures, but can also make things look smoothed-over and artificial). In any case, the BD60 is capable of reproducing the entire range of details present on just about all DVD-Video discs without any severe ringing, which is exactly what I would hope for.

In terms of Cadence detection (that is, optimising the motion handling for Film material), the DMP-BD60 is no improvement on the previous DMP-BD35. This means that with the default settings, PAL (UK/European style) Film DVDs lose some of their film-like motion quality and display flickering on fine details, as the PAL 2-2 cadence isn't automatically detected and compensated for. As with the BD35, the user can choose to force the “Film” deinterlacing mode beside the “Progressive” option to eliminate the problem. It's not as convenient as the player detect the correct cadence by itself, but it's a lot better than players without this level of control at all.
American-style NTSC contents fared slightly better in terms of cadence detection, which will be appreciated by owners of Region 1 DVDs. The common 3-2 cadence passed at all times, whereas the more unusual ones, such as 2-2 and the “Anime” cadences failed in all cases, even when “Film” was forced on. The performance overall with DVD playback is better than many other players, but still not at the level of dedicated high-end processors or machines. Let's be honest, the selling point of VIERA Cast is probably the access it gives you to YouTube. This way, users can conveniently watch videos of people setting their hair on fire and hitting their friends in the face with a wet fish easily on their Blu-ray player, without having to go to the trouble of mastering AVC encoding or Blu-ray Disc authoring. Of course, there's also the Picasa Web Albums service, which lets you do the same thing in still-frame form. Currently, that's all there is to VIERA Cast - services like Bloomberg and Eurosport aren't featured here yet. However, Panasonic assures us that these will appear shortly.

Panasonic give us a choice when it comes to startup time: do we go for the fastest startup time, or the lower power consumption? I went for latter, because the startup time is still not at all painful in the eco-friendly mode.

To measure these times, I loaded a disc (in this case, Sony's Region A release of Nick & Norah's Infinite Playlist), turned the player off, and measured how long it took from pressing the Power button to seeing moving video on-screen (in this case, the Sony logo).

Unless you have more specific requirements from a Blu-ray Disc player, such as analogue surround audio outputs or an RS-232C port for home theatre integration, then there really is almost no reason not to consider the Panasonic DMP-BD60. Granted, the DVD playback could still be improved, but I imagine most readers of a site like this one will have a favoured DVD playback system already in place, and will only be looking to add Blu-ray functionality into the mix.

The typically excellent performance of the Uniphier chip is especially evident when it's actually required to intervene, as is the case with 1080i content (although this is still a rarity on Blu-ray). It's a nice reminder that Panasonic's engineers have their heads well and truly screwed on and are making actual performance improvements in areas which are lacking in other machines, rather than tinkering with the image for the sake of it, and charging you extra for the high-end “privilege”. Likewise, 1080p content is handled as it should be, by being decoded and sent to the display without obvious interference.

There is no shortage of affordable Blu-ray players on the market which produce exceptional picture quality from the common 1080p/24 discs, but Panasonic's machines go a step further by offering stellar 1080i performance, too, which is always welcome. The DVD playback, while not free of faults, is still above average because it allows for the user to intervene and force Film deinterlacing mode: a little annoying, but far less so than being stuck with jaggies. As a result of all of this, my end word on the DMP-BD60 is plain and predictable: it works as you'd expect to and it's a fine choice if you need a BD player to connect to a digital AV system.