The cost of entry is lower than ever: should the DMP-BD35 be your ticket into high quality video? 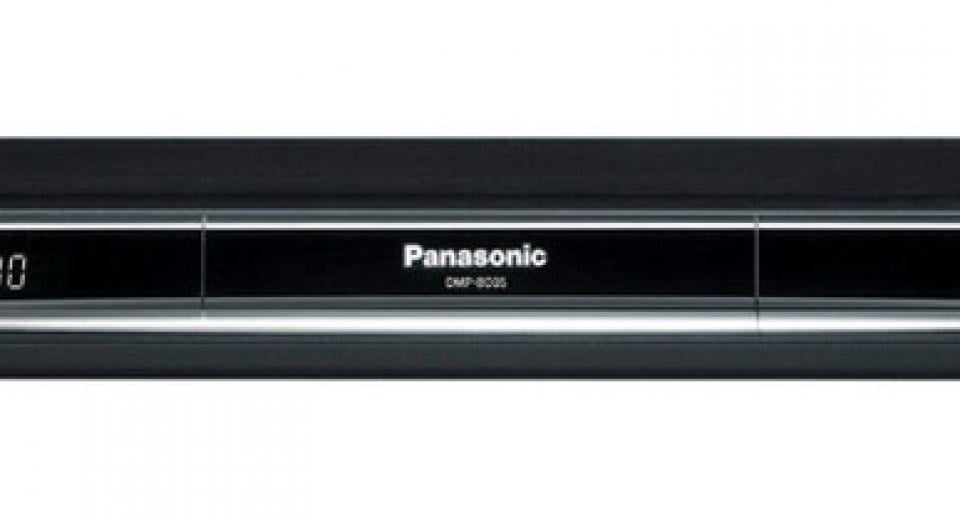 Blu-ray Disc (BD) is hitting the mainstream. Although a select few are still grumbling at the new possibility of watching high quality video in the home - or “having to replace” their DVD collection, depending on your point of view - the fact is that consumer electronics companies are making the cost of entry lower and lower, and already, Blu-ray has a heartening number of titles which actually maximise the format's video quality - which is more than DVD Video has done in the 12+ years of its existence.

The timing is right, then, for long-time BD supporter Panasonic, to serve up their DMP-BD35. This is a slim, Profile 2.0 BD machine, meaning that, unlike earlier boxy units, it supports all features of the relevant Blu-ray specifications, including Picture in Picture content and high-definition audio. Scratch “planned obsolescence” off from the ever-shrinking Blu-ray refusenik reasons list.

The DMP-BD35 is styled in black and silver. The front of the unit contains two flip-down panels, one of which reveals the disc drawer, and the second which lets us insert an SD Card (a feature Panasonic are keen to push on all their devices, but one which I think few people actually care about). The player is no bigger than an average, modern DVD player, a goal seemingly accomplished by Panasonic’s pared-down internal architecture, at the heart of which is a single, tiny video processor chip, which Panasonic calls Uniphier. This tiny piece of silicon controls everything that goes on in the DMP-BD35: video, audio, on screen menus, drive control, you name it. It's some impressive engineering.

More importantly, things are looking good on the outside, too. Around the back, we have an HDMI 1.3 AV output and a LAN port, for connecting the player to the internet. These (and of course the power cable) were the only connections I used for the most part, but the options are there for analogue Component video, standard-def Composite video (presumably for problem solving and testing), a standard-def Optical audio output, and analogue Stereo audio outputs. This setup was just fine for me as I have an amplifier capable of high-def audio over HDMI; owners of older amps/receivers will need to step up to the DMP-BD55 model to gain 5.1 Analogue Surround outputs, or make do with Standard Definition audio via the Optical output until they upgrade their amp. After turning the machine on, I did a quick check of the settings in the SETUP menu. The important ones here are mainly in the Sound menu; where you can choose to send the different types of audio streams as-is ("Bitstream") or have them decoded to Multichannel PCM before being sent to the receiver. The TV/Device Connection menu also has a 24p Output On/Off switch buried inside, which I turned on.

After scouring my mostly Region A BD collection for a disc that I was not forbidden to watch on this Region B machine, I started playback of a standard 1080p/24 disc (the most common type). With the settings stored in the player when I received it, I was happy to see that there were no problems at all.

With that said, it’s worth looking through the Picture options to see what sort of problems it’s possible to create (so you know why to avoid them). I pressed the DISPLAY button on the remote and found the Picture submenu, which lets you choose from video preset modes such as Cinema, Fine, Soft, and Normal. “Normal” appeared to be the correct setting which reproduced content faithfully from the disc, but just to be 110% sure, I enabled the “User” option and made sure that all the settings were at their ideal positions. The menu here offers these adjustments. Contrast, Brightness, Colour and Gamma could be worthwhile functions to control when integrating the player as part of a larger system; whereas the Sharpness, 3D NR and Integrated NR functions should ideally be disabled.
The Sharpness adjustment here is a more delicate take on the usual much-avoided control; stepping it up adds ringing, lowering it adds blurring, so leave it at 0. It's a shame that Panasonic feel the need to process the video on BD - it should already be top-tier to begin with, and tinkering with it simply because we can is a fairly lethal goal (and one which our displays, sadly, are already more than capable of).

“3D NR” is Temporal Noise Reduction, which analyses noise over a series of frames and attempts to remove it. “Integrated NR” simply tackles noise at the single-frame level. The effects of both of these options are subtle, which is a good thing. The noise and film grain reduction which is sadly sometimes applied to Blu-ray movie transfers prior to encoding is already damaging enough as far as picture quality is concerned, so I made sure to turn these off to ensure no more damage was being done by the player. (This might sound like a real downer, let me reiterate: on Blu-ray Disc, there are already more titles that make use of the format's picture quality potential than there have ever been on DVD, meaning the majority of discs look excellent).

After watching a few movies on the machine, I found out that the “Sound” menu also conceals “Sound Effects” and “Dialog Enhancer” options. The Sound Effects setting contains options such as “Night Surround”, “Remaster” 1, 2, and 3, and Virtual Surround modes. Although none of the “Remaster” modes sounded offensive, I am incredibly wary of the “process everything” attitude of electronics manufacturers and turned it off. The manual describes this feature as one which adds (or accentuates) high frequency sounds, so it appears to be nothing more than an equaliser function. (It turns out that this option does not affect HDMI audio output, which explains why I couldn’t hear its effects).

The “Dialog Enhancer”, meanwhile, raises the volume of the centre channel in an attempt to make dialogue easier to hear. I had no need for this in my setup, so didn't use it.

This is not going to make for a very exciting review, but with 1080p/24 content, there was simply nothing wrong with the video or audio. In fact, put in a more positive way - it appeared to be perfect! The DMP-BD35 would appear to be reproducing exactly what it is fed, which is ideal behaviour. (There's been talk lately of image quality differences between Blu-ray Disc players, but without having an absolutely guaranteed reference to go by, it's incredibly difficult to say for sure. In reality, before worrying about their BD players, people should be spending time investigating inaccuracies in their display, and also pressuring studios for untampered output - these are two areas where picture problems are far more likely to happen).

This is all well and good, but how does the DMP-BD35 cope with our DVD collections? Whilst satisfying Blu-ray playback (at this moment in time) largely relies on just accurate 1080p/24 reproduction, the situation with DVD is far less convenient. As a result, I fired up the player and fed it the Silicon Optix DVD Video test discs.

First up: diagonal interpolation (jaggies smoothing). Here, the DMP-BD35's capabilities were very good for a standalone player. If you’re familiar with the Silicon Optix test disc, then only the bottom of the three rotating lines was slightly jagged, indicating a good result.

DVD images, by default, were a touch too sharp. The designers of the player have probably added Sharpening when DVD material is played to compensate for the lack of detail present on most of these discs. This can be useful, but the problem here is that on top of enhancing edges, this has the tendency to enhance mosquito noise, too. I backed the Sharpness control on the player off a little bit in these cases, and was met with a very satisfying image. Irritatingly, there’s only one user picture preset mode on this player, so this meant that I had to keep setting the Sharpness control back to 0 to avoid blurring Blu-ray material.

For the PAL Film 2-2 cadence, the DMP-BD35 initially failed, meaning that Film content had to be viewed with lessened vertical resolution and jaggies. However, there is a slightly inconvenient workaround: the user is able to manually force the “Film” option on in the Picture menu to gain full-resolution film playback from PAL Film DVDs, which is not ideal, but could be much worse. The best players will detect this automatically with high accuracy, but the situation we have here is still 100 times better than having to watch films through jaggies (as many other players require the user to do).

As usual, American-style NTSC Film content fared better. The player passed the most important (and by this I mean the most common) 3-2 cadence test, but it took a second to lock on. The 5-5 (Animation) test also passed.

Imagine my unexpected delight when, upon playing an NTSC DVD, I was offered the option to output at 24p! Although the DVD Video format was designed without this capability in mind, there is a feature during the encoding and authoring process which allows the typical conversion to 60hz to happen in the player, rather than in the studio. The purpose of this was actually to maximise disc space and compression efficiency; but a useful and often unexploited side-effect is that these flags in the video stream can be read the player and used to output NTSC Film DVDs at 24p. Well done to Panasonic for taking the time to get this right.

Interestingly, the player even allows you to convert 60i video camera material to 24p. You could, in theory, grab an American DVD of a TV programme shot with video cameras, and give it more filmic motion. Shockingly, this doesn’t actually look too bad, but it’s not something I’d recommend, unless you really want to watch your Jerry Springer best-of DVD with unintended cinematic glory.

On the whole, DVD playback was very usable, but not exceptional. I could, however, use a region free version of this unit as my main DVD machine without too many complaints.

The remote control Panasonic supply here is fairly lightweight and is easy enough to use for Blu-ray playback. Play/Pause, Stop, Chapter, and Menu buttons are all nicely placed and accessible, although with this said, I still much prefer the overall feel of the Playstation 3's BD Remote accessory to this. In addition, Panasonic's remote, bizarrely, doesn't feature a DVD "Menu" button, but instead has a "Top Menu" button (which isn't the same thing and is less frequently used - see the Manufacturer Feedback below for a more technical explanation). The "Menu" functionality has to be accessed through a different screen, which is a fairly strange design decision which I hope they'll reconsider on future models.

Anyone interested in home cinema featuring any sort of cinematic integrity owes it to themselves and the filmmakers to equip themselves with a BD machine, economic downturn or no economic downturn. Panasonic's DMP-BD35 is a cost-effective, incredibly appealing, future-proof Blu-ray Disc player with great DVD playback. Compared to the ubiquitous Playstation 3 (which in itself is terrific value), this machine is a little slower, but has the advantages of being considerably quieter, considerably cheaper, and much nicer to look at. There's very little else to add - both machines put out gorgeous, accurate 1080p/24 video, and brilliant audio. As a result, the bargain-priced Panasonic DMP-BD35 gets a round of applause from AVForums.