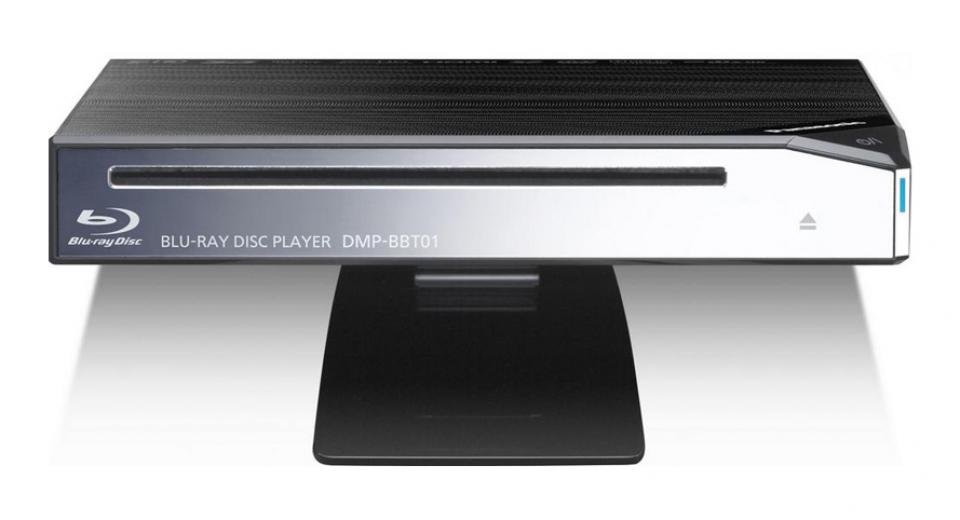 So just how do manufacturers get their Blu-ray players to stand out in the crowd? They could add a load of connected features, possibly build in Wi-Fi or perhaps make a control app for smartphones or tablets? But all that is so 2012 and the market is again reaching a state of homogeny. So, what’s the answer? Panasonic seems to have taken the ‘build something quirky that’ll get noticed’ route with the DMP-BBT01 and we can’t blame them for trying. So does it have the performance to back up the swagger? Read on MacDuff.

Just when we’d thought we’d described a rectangular black box in as many ways at the English language permits, along comes the BBT01 to give us respite - it’s a square black box! Joking aside there’s more to the originality than that, as this compact little player is able to be positioned in 3 ways on the included stand or just on its loneseome in a horizontal position. The three different configurations with the stand are ‘horizontally’ with the slot loading disc tray looking up hungrily for ‘food’; with the stand can be disassembelled and placed either side of the player to give a vertical placement or the DMP-BBT01 can be placed diagonally to give a floating appearance. Panasonic has been big on floatiness recently but we’re not sure that particular look will work in many living rooms – save for the most ultra-modern – although it does allow the reflective trim to twinkle alluringly. The great thing about the flexibility (and diminutive size) is that it means you’ll almost certainly be able to squeeze it in to your set up, even if space is at a premium.

The unit measures just under 18cm both in width and depth and is less than 3cm in height so it’s definitely the most compact Blu-ray player we’ve ever reviewed, not that small has to mean under engineered as the DMR-BBT01 certainly feels nicely constructed. During playback we were sometimes be aware of the reading of discs due to the motors being slightly audible, which is probably due to the lack of acoustic dampening opportunities the size dictates. Also, because of the lack of room, there’s only unit mounted, touch-sensitive buttons for power and eject and connections are limited to a single HDMI, a S/PDIF Digital Audio out and a LAN port to the rear, with a SD Card slot and USB port secreted below a removable flap, front left. There is built in Wi-Fi too, which is a plus in a couple of respects; it allows easy access to Panasonic’s online content and it allows one to use the remote app for iOS and Android, which is by some deal a more satisfactory control experience than the included controller offers. It is, without question, one of the most annoying remotes we’ve had the displeasure to encounter being as the almost sole means of navigation is via the touchpad area in the middle, which is rubbish. We don’t mind innovations provided they’re not foisted upon us so the lack of any real buttons of note is a big disappointment.

The Panasonic DMP-BBT01 uses the same central HOME page as the rest of the range that allows a degree of customisation for up to four users: including selecting the wallpaper, an icon and a user name, as well as registering your smartphone as a remote control. Once in the HOME page you can either move up to enter the networked features, down to watch video, left to look at pictures and right to listen to music; if you press the enter button you access the Setup menus. The video, photos and music can be accessed from whichever storage media they're held on whilst the network option allows the user to access Panasonic's VIERA Connect internet portal or their media server.

In Setup, there are the Player Settings submenus, the first of which contains all the Picture options, including the Picture Mode and the Picture Adjustment controls, although these can only be accessed in the User picture mode. We’ll look at the effects of the various picture modes later, but there should really only be one, in any case, that delivers an untampered with signal. Although it’s almost always preferable to make picture adjustments at the display end, the Contrast, Brightness, Colour, and Gamma settings might prove useful for a fine tune.


Other controls within the Picture submenu include Chroma Process, which delivers chroma upsampling to a compatible TV and whilst we couldn't see a huge difference there appeared to be slightly less colour banding in some scenes so we left it on. The Detail Clarity and Super Resolution controls are both essentially sharpness features which we left off because once again we want the player to output the 1080p signal from a Blu-ray without any unwanted processing. The HDMI Output option allows you to select the HDMI Video Format (resolution), the 24p Output, the HDMI Colour Mode, the Deep Colour Output and Contents Type Flag. There are also controls for NTSC Contents Output, Still Mode and Seamless Play.

The next submenu relates to Sound and includes options for setting the Sound Effects, Dialogue and Dynamic Range Compression, all of which are best left off. Then there is Digital Audio Output where you can select which audio signal to output, the BD-Video Secondary Audio and the HDMI Audio Output. You can choose to send your Dolby/DTS/MPEG audio as either Bitstream or PCM but note that setting BD-Video Secondary Audio to 'On' and sending your lossless audio bitstreamed will result in it being sent in its lossy format. Next we have the PCM Down Conversion, which allows you to output audio at 192kHz or 96kHz as 48kHz if necessary. Then there is Downmix for multi-channel to 2-channel stereo, Audio Delay and 7.1 Audio Reformatting which will play 6.1 and 5.1 surround encoded audio at 7.1 when set to auto.


The 3D submenu allows the user to setup 3D BD-Video Playback, 3D AVCHD Output, the 3D Type (side by side, frame sequential etc.) and the 3D Playback Message (best left hidden or it gets annoying). There is also a control for manual settings such as Distance, Screen Type, Frame Width and Frame Colour, which shouldn't be used if the 3D content has been encoded correctly. Finally, there is a control called Graphic Display Level which adjusts the position of the Option menu etc. The Language submenu, as the name suggests, allows for the selection of the language used for Soundtrack Preference, Subtitle Preference, Menu Preference and the On-Screen Language.

The INTERNET button on the remote brings the user to Panasonic’s DIGA branded internet platform which is essentially the same as the VIERA Connect platform found in the TVs but there’s no Web Browser included, presumably because the BTT01 hasn’t got the processing power necessary to run it. We’re not quite sure why Panasonic persist in separating the branding of the online platforms but we’re sure they must have good reason, surely? There are a good number of applications, however, including the BBC iPlayer, Twitter and Facebook. In addition you get Netflix, YouTube, Acetrax, Dailymotion, Euronews, Picasa and the ShoutCast and Aupeo radio apps. Netflix has even managed to negotiate themselves a dedicated button on the remote control.


Another addition is the slimmed down VIERA Connect Market, where users can download additional apps and games, although there is no payment feature. As well as being able to access your home network, and any media server on it, the Panasonic can also act as DLNA renderer in its own right. We were disappointed that the DMP-BBT01 features a similar bug to the players we’ve reviewed in the past, in that when accessing our own media servers it couldn’t go deep enough in to the folder structure to make it of much use and it would have required moving our media files up several levels to make it viable.

As we’ve seen with the rest of this year’s Panasonic products, the handling of standard definition content is superb. Scaling performance is extremely clean, film cadence detection is rock solid and deinterlacing exemplary. There’s little excuse not be watching in High Definition in the year 2013 but for those DVD’s you’ve yet to double dip into Blu-ray, the BBT01 is very sympathetic. We even tend to get the kids Blu-rays, these days, but old favourite DVDs such as Madagascar and Finding Nemo certainly looked a treat and even non-animated content was given a decent spit and polish before being thrown on the unforgiving screen of a Full HD TV.

In all of our testing, so far, we’ve yet to come across a 3D player that was incapable of doing its job with 3D material and the DMP-BBT01 is no exception. That is to say we experienced the exact same sense of depth and dimensionality to images with no crosstalk, or any other kind of artefact, being introduced. We tested that the signal being sent was full resolution with a display we knew capable of resolving it and, again, there were no issues. So we can confidently state, it’s as good as any other player we’ve tested for 3D playback; confirmed by another unsuccessful journey aboard the Titanic and yet another hair-raising journey to Pandora. Our crosstalk torture test, Happy Feet 2 established the BBT01 added none of its own and nor did we encounter any difficulties with disc incompatibilities or other unexpected surprises. Regular readers will be pleased we’ve added an new disc in Ice Age 4 that only further proved the Panasonic as a perfectly capable 3D player.

Likewise, once in their most neutral picture modes, we’ve seen next to no difference in 1080p output between the players we’ve reviewed, users just need to ensure the player is left in Normal Mode. Running through the Spears and Munsil disc revealed that the player is capable of producing full luma and chroma resolution, meaning our output won’t be losing any fine details, even if the display isn’t capable of showing them. Switching to some real world material and we could confirm no grain reduction (300/No Country for Old Men), added judder (Casino Royale) and general ability to just look stunning (The Dark Knight and Boardwalk Empire).

From disc based tests, the performance with 1080i signals was perfectly good. Deinterlacing was clean with barely anything in the way of jaggies with rotating bars patterns and the cadence detection for film shot, progressive material was also excellent. Stevie Wonder’s concert from London’s O2 arena, on Blu-ray, looked decidedly wonderful.

It’s not often – if ever – that we’ve described a Blu-ray player as being natty but that’s the term which comes to mind for the Panasonic DMP-BBT01. It’s unusually small form factor and multiple choices of placement orientation means it should be able to slip in to most set-ups with ease. The downsides of the convenient form factor are just the bare bones in terms of connectivity and a slightly louder than usual optical drive but it rarely troubled us whilst viewing. Menus are simple enough to navigate, provided you ditch the terrible touchpad remote in favour of the Android or iOS apps, and features are bountiful with plenty of video on demand services, Skype, Twitter and Facebook amongst the highlights.

Provided one makes sure the DMP-BBT01 is set to the default picture mode, which provides an uncoloured signal, it can handle everything thrown at it with aplomb. Standard definition signals are scaled very cleanly and solid cadence detection means your old DVD’s will be given a nice polish before being spat out on to the big screen. Naturally you will have primarily bought the player to display HD and/or 3D movies and the BBT01 certainly won’t let you down here, either. With its near flawless performance in SD, HD and 3D, this stylish little Panasonic spinner certainly merits serious consideration. And not just because it dares to be different.