Carrying on a fine heritage in a new era of video. 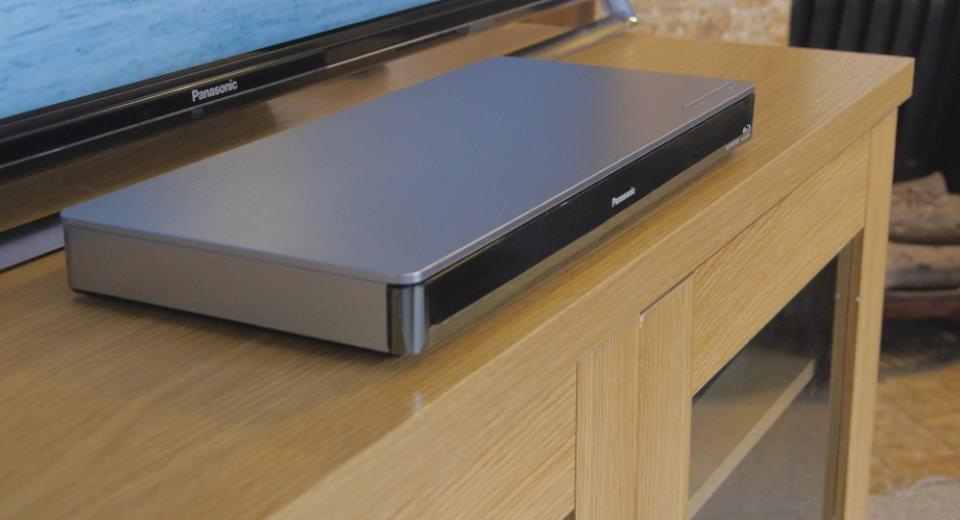 What is the Panasonic BDT460?

The DMP-BDT460 isn’t quite at the top of the Panasonic 2014 Blu-ray player range but it’s not far off.

That honour is the reserve of the BDT700 which boasts THX certification and compatibility with HDMI 2.0 and, therefore, 4K at up to 60 frames per second. However the BDT460 isn’t completely lacking in the Ultra HD department as it supports an output upscaled resolution of 3840 x 2160p at 24 frames per second. Quite how much benefit that will bring, in terms of scaling Blu-rays to match a brand new 4K TV, remains to be seen but it’s a nice logo to stick on the box.

The model we have here is a retail sample – so no mumbo jumbo ‘golden sample’ conspiracy theory accusations can be levelled – and comes pre-modified to be a multi-region player for both Blu-ray and DVD, not that it will have any impact on testing. The standard retail price for the BDT460 is just under £200 which, remarkably, is not all that cheap but it does boast a new MediaTek processing chip and a bundle of Smart features, so let’s how it stacks up.

The BDT460 looks heavier than it actually is thanks to a faux metallic finish to the top surface. In fact, the unit is almost totally plastic in its construction and very lightweight as a result, but it’s a very attractive player nonetheless. There are some simple raised control buttons, also on the top surface, and the mirror-finished front panel drops down to reveal two USB ports and a SD Card Slot.

Obviously this is also where the disc tray emerges from and it does so with relative speed and a reassuring ‘thunk’. The tray mechanism is lovely and quiet during playback but you get the usual expected increase in activity when using seek functions. Around the back are two HDMI outputs to allow those with older HDMI equipped AV Receivers to send 4K/3D signals direct to the TV whilst still routing the audio through it. There’s also a S/PDIF digital audio output and both wired and wireless LAN. The supplied remote control is almost a carbon copy of last year’s equivalent but the alphanumeric buttons have been squished to make it squatter. It fits nicely in the hand and features a very prominent button to take you to the Netflix app, which is a welcome addition around these parts. The most used keys sit more or less in the centre and we’ve absolutely no complaints about it really.

Dual HDMI output will be a big bonus to many

The BDT460 uses a central Home page, from which you gain access to other menus or content by relying on use of the directional keys, rather than using the ‘OK’ button. At least in most instances, which kind of takes some getting used to but we certainly have no quibbles on the presentation, which is of a silver/grey colour scheme and highly attractive.

One case where you will have to hit the ‘enter’ button is when entering the ‘Setup’ Menu where all the key settings are located. The Player Settings submenus, include the Picture Mode and the Picture Adjustment controls, although these can only be accessed in the User picture mode. The only other option is HDMI Output where you can select the HDMI Video Format (the resolution which now includes scaling up to 4K), the 24p(4K)/24p Output, the HDMI Colour Mode, the Deep Colour Output, Contents Type Flag and the HDMI (SUB) Output Mode, which controls the second HDMI output. The second submenu relates to Sound and includes options for setting the Dynamic Range Compression and Digital Audio Output. Here you can choose which audio signal to output, select the BD-Video Secondary Audio and the HDMI Audio Output. Next we have the PCM Down Conversion, as well as a Downmix feature and DTS Neo:6. The 3D submenu allows the user to setup 3D BD-Video Playback, 3D AVCHD Output, the 3D Playback Message (best left hidden or it gets annoying) and Graphic Display Level which adjusts the position of the Option menu.

The Smart TV suite of the Panasonic BD Players isn’t as well furnished as those of their TVs but there is a good selection of widely used apps on offer. By accessing the ‘Network’ icon at the top of the Home screen, then through the Network Services sub heading, one is taken to a selection of online services. These include the aforementioned Netflix, as well as BBC iPlayer, YouTube, BBC Sport and a continued support for myspace. God bless ‘em.

You can also partake in some social networking via Twitter and Facebook apps, surf the web using a reasonably effective browser or listen to streamed music, courtesy of the AUPEO internet radio app. A delve in to the Viera market will uncover further downloadable goodies, although we could only see Vimeo that was of any interest over and above the pre-installed selection.

We couldn’t get the Panasonic 2012 Blu-ray Player mobile app to work with the BDT460, so it appears there is no compatibility and there is no newer version to try, at present. We’ve contacted Panasonic for an update on this and will relate the information back here when we get it. In the meantime you can use your Digital Media Controller (DMC) compatible phone or tablet to playback contents via any DLNA servers you have on your network. One of Panasonic’s major marketing bullet points in the promotional blurb accompanying the announcement of the BDT460 was its ability to display images at a native 4K resolution. The usual process is for the device to downscale and then scale back up and we have to say the results are really good. On some very detailed hi-res jpgs we had in our collection, there was a noticeable upgrade when displaying them on the Panasonic AX802, when compared to seeing the same ones using a PS3 outputting 1080p and the allowing the TV to scale.

As mentioned in the intro, this particular sample is of the multi-region variety for Blu-ray and DVD and it almost couldn’t be simpler to activate. For DVDs, it’s all done automatically and for selecting Blu-ray player region, it’s done by pressing the numeric 1,2,3 keys, whilst the unit is in standby, whereupon it will automatically boot up in to the corresponding region. We know a lot of you like to get your hands on Blu-ray releases early, from over the pond, so this is a very neat feature, very well implemented.

You can always rely on the Panasonic Blu-ray players to deliver and the DMP-BDT460 is no exception. We really couldn’t fault it with whatever we threw at it, whether it was DVD or Blu-ray in 2D or three. Having the opportunity to marry the BDT460 with a native ‘4K’ panel was a bonus but, when it came to 1080p, at least, we could see no tangible difference between its scaling, compared to that of the AX802. That is no sleight; Panasonic’s newest Ultra HD TV is particularly good in that regard, in any case, but don’t go into the purchase thinking that it will necessarily make your Blu-ray collection look any better – resolution wise - than your 4K telly will.

That said, if you still have a sizeable collection of DVDs, you will see some benefits with even cleaner and crisper scaling performed by the player, which really did render some of ‘our’ better discs looking incredibly good. House favourite, Tangled, was a particularly fine example of that, looking almost Blu-ray standard on the AX802, when the player was at the helm of the major processing duties.

As we'd expect from Panasonic, superb video processing
Panasonic has always been proud of its chroma upsampling techniques, which act to restore (interpolate) the missing colour details from 8 Bit Video and, provided you have TV that capable of receiving the information, you will see a slight benefit in all material. The effects are honestly easier to see in test patterns, such as those on the Spears and Munsil disc, than using day-to-day content on a 1080p panel but it’s easier to spot in action with an Ultra HD TV, where those extra pixels show up the added colour resolution more readily.

You will find a variety of Picture Modes in the Setup menus, or by hitting the Option button on the remote control but your best advised to leave it be in the ‘Standard’ option for an un-tampered-with signal. The ‘User’ preset does provide some ‘front panel’ controls but you’re only ever likely to need them for a fine calibration. And even then, it’s unlikely you’d want to touch them. The other options – Soft and Fine – either slightly blurs or slightly edge-enhances pictures, so best left alone. We’ll leave you to work out which does what.

What more could you want from a Blu-ray player? For most folks, the Panasonic DMP-BDT460 will serve them fantastically for years to come. It looks great, all modern and slick. It’s very well connected and can boast two HDMI outputs, wired and wireless LAN, a couple of USB ports and an SD Card slot amongst its armoury. It also has a nice array of Smart TV features, including a good set of catch-up and streaming service with BBC iPlayer, Netflix and YouTube the stars of the show.

But you could throw all that Smart TV functionality in the bin, were not the BDT460 a great disc player, and it is precisely that. Whether you want to feed it DVDs or Blu-ray, it’s not found wanting with some superb colour up-sampling and flawless colour reproduction. It’s very quiet in operation as well, although if you’re lucky enough to own a 4K TV, it will probably make a slightly better job of scaling than the BDT460. However it’s great for showing off your hi-res photo collection with native 4K jpeg support. In fact, there’s barely nothing you could fault the BDT460 on. Highly Recommended!