Great disc... shame about the film. 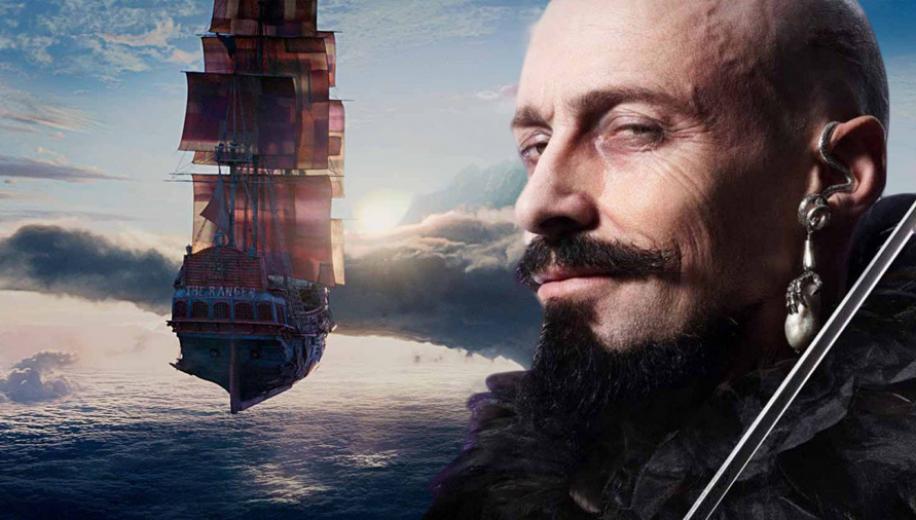 Did you ever wonder how Peter Pan became Peter Pan? No, thought not.

Pan must have seemed like a good idea at some point, telling the origin story of how Peter Pan became the boy who wouldn't grow up. Although given that most of the big screen adaptations of Peter Pan haven't been that successful and even Steven Spielberg failed to create a decent sequel, perhaps it wasn't such a great idea after all. There seems to be a modern obsession with creating prequels to well-known stories or films and establishing backstories that no one really wanted. However if you are going to tell an origin story, at least do it well. Sadly Pan fails to even manage that task effectively.
The film seems to have a strange tone, switching from darker scenes set during World War II to over-the-top sequences with the denizens of Neverland all singing Smells Like Teen Spirit. There's Hugh Jackman's Blackbeard, looking like he's got tuberculosis, there's the racially insensitive casting of Rooney Mara as the native American character Tiger Lily and Garrett Hedlund's James Hook with a distracting American accent. It's hard to work out just who the film is aimed at and ultimately it even fails in it's primary task because by the end Hook hasn't lost his hand and he's still friends with Peter. The US Blu-ray of Pan is region free and arrives with a 1080/24p transfer that uses the AVC codec and is presented in the film's 2.40:1 theatrical aspect ratio. Pan was shot using Arri Alexa XT digital camera at resolution of 3.4K and finished at 2K for its theatrical release. The film was converted into 3D in post-production but the disc being reviewed here is the 2D version. Warner Bros. have done a marvellous job with the Blu-ray release of Pan, taking the original digital source and delivering a gorgeous transfer that perfectly captures the filmmaker's creative intent. The film has a very deliberate colour scheme, starting with an almost mono-chromatic opening section set in London during World War II.


The film may have panned at the box-office but the picture quality is simply stunning.

Once the action shifts to Neverland there is an explosion of colour, with the screen awash with primaries that firmly establish the fantasy realm, whilst keeping flesh tones natural. There is a wonderful level of detail in the image that reveals textures in everything from Hugh Jackman's make-up to the sets and the costumes. The computer generated effects are also seamlessly blended with the live action, resulting in film that manages to blend a strong visual imagination with the traditional elements of the Peter Pan story. The blacks are well defined and dark, although shadow detail remains, whilst the whites are bright without clipping, thus giving the image an impressive dynamic range. The transfer is free of any digital artefacts, banding or edge enhancement, resulting in a demo-worthy image. Pan was released theatrically with a Dolby Atmos soundtrack and this has been included on both the US and UK Blu-rays, allowing for a fully immersive audio experience at home. The Dolby Atmos element is delivered within the Dolby TrueHD soundtrack, so there is a core 7.1-channel mix for those who don't have the necessary equipment. We reviewed Pan using a full 7.2.4 Dolby Atmos configuration and those that do have the capabilities to enjoy multi-dimensional audio are in for a treat. The sound designers have cleverly used the added freedom that an object-based approach of Dolby Atmos allows to enhance the viewing experience, mixing the audio to match the action on screen. A good example is when the pirates bungee jump down from their ships, which are flying overhead. The sounds actually come down from overhead, matching the movements of the characters on screen, and really placing you in the middle of the scene.


The audio compliments the fantastic images with a great Dolby Atmos soundtrack.

Another good example of the sound designers using the additional speakers in the Dolby Atmos configuration to their full affect is the air raid towards the beginning. There are plenty of opportunities to steer surround effects around the room as planes fly past and overhead and bullets tear through the room. At one point the sound follows a falling bomb and there are also action scenes with plenty of dynamics and deep bass to underline certain key sequences. There are plenty of atmospheric touches within the forests and jungles of Neverland and the journey to the fairy realm is also an audio highlight. The music is well layered into the film, as are the strange scenes where the Pirates' captives all sing Nirvana and Ramones songs. Throughout all this the dialogue remains clear and centred to the action on screen and overall the soundtrack is great example of how an immersive audio mix can enhance your viewing experience and make a poor film better. Pan is yet another example of a demo-quality Dolby Atmos soundtrack that uses object-based audio to its full potential.

The US Blu-ray release of Pan comes with the following set of extras and the UK release is exactly the same:

Director's Commentary - The director Joe Wright talks about the film, offering up technical insights and shooting anecdotes, although there are long periods of silence.
Never Grow Up: The Legend of Pan (HD, 10:50) - This featurette serves as an introduction to the original story and characters of Peter Pan before explaining how it was reimagined for Pan.
The Boy That Would Be Pan (HD, 06:07) - This featurette covers J.M. Barrie's classic character and the casting of Australian actor Levi Miller as the boy who would never grow up.
The Scoundrels of Neverland (HD, 05:49) - This featurette explains why Blackbeard was chosen as the origin tale's villain and covers all the bad guys in Pan.
Wondrous Realms (HD, 05:01) - This voiced-over special feature is aimed at children and walks viewers through the sets and concept art for the film's different locations. Pan is a strange film that takes the famous story of the boy who wouldn't grow up and fashions an origin tale that no one really wanted. As a result the film frequently nods to the classic story, whilst constantly trying to reimagine the characters to fit into its premise. Unfortunately the result, whilst spectacular to look at, lacks a strong narrative drive and frequently suffers from a confused tone. Never quite sure what it really wants to be, the film ultimately even fails in its main goal as an origin story, ending without tying up all the lose ends. No doubt the filmmakers expected to continue the story in a sequel but after the film's failure at the box office, we never will find out how Hook fell out with Peter and lost his hand.


The Blu-ray release of Pan boasts demo quality pictures and sound, just don't expect much from the film itself.

Whilst Pan itself might ultimately be unsatisfying as a film, the Blu-ray release is a reference experience through and through. Warner Bros. have delivered a fantastic transfer with a pristine image that is bursting with colour and detail. The images are completely free of any unwanted artefacts and the result is a near-perfect viewing experience. The Dolby Atmos soundtrack manages to live up the superb picture quality, delivering a wonderful sonic experience that helps immerse you in the world of Pan, whether you're watching in 2D or 3D. The extras are reasonable and about as good as we can expect given the film's failure, making the region free Blu-ray a decent package. The film itself may be disappointing but the Blu-ray is certainly worth considering as a demo disc.


You can buy Pan on Blu-ray here