Nothing to be gained in watching this. Just pain. 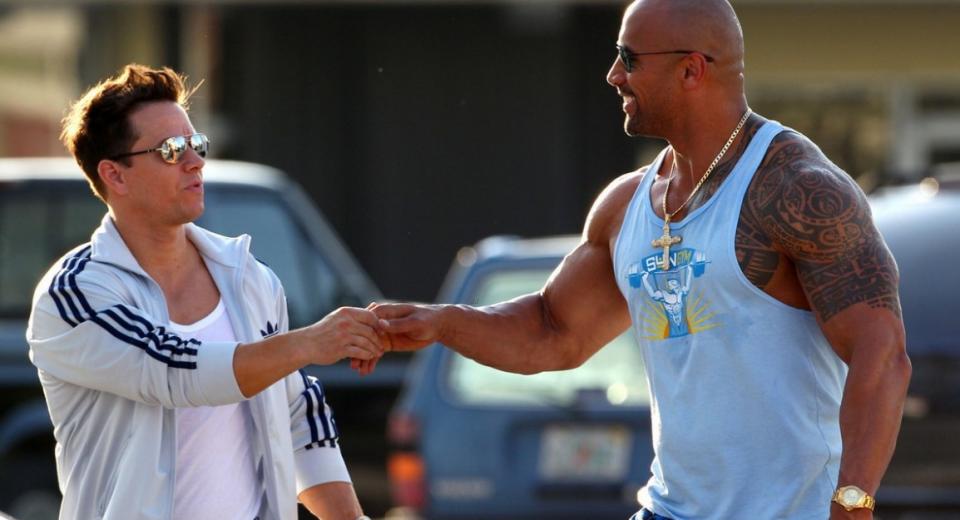 It takes a fair bit to make you feel sorry for Michael Bay, but Pain and Gain goes out of its way to try to evoke such a feeling. After a trio of Transformers movies bludgeoned audiences into thinking that Bay had little grasp on anything other than giant CGI robots (something which even he has seen decimated by the considerably more impressive Pacific Rim action), the in-your-face action director returns to his smaller-scale roots to do a far more low key drama, one which he managed to squeeze out between blockbusting Transformers instalments.

The intention carried some promise. After all, Bay was returning to his Miami roots – where he debuted with the $19 Million dollar hit Bad Boys, which simultaneously launched the careers of both himself and Will Smith. Pain & Gain was budgeted at little more than that – the second smallest budget in his film history – and he promised it would be a character-centric feature which he had so much faith in that he was taking a back-end salary cut which would only pay out if the film was successful. Personally, I was kinda hoping that his return to Miami would also mean a return to the Bad Boys franchise itself, but Will Smith’s busy schedule – and immense salary – have kept the hopes of this distant. Still, I figured that this could be the next best thing.

Based on a true story – some might argue loosely – we follow obsessive bodybuilder Danny Lugo, who has dreams of being far more than just the lowly gym trainer that he is. Initially he puts his ambitions to good use, but, after taking his career as far as it will go, he decides that the only way for him to be truly successful is by robbing one of his richest clients. Enlisting the help a steroid-impotent fellow trailer and a born-again ex-con, the three of them attempt to put into action Lugo’s plan. Almost everything that could go wrong, does go wrong, but, if Lugo has learned anything from the self-help gurus he’s studied, it’s “don’t be a don’t-er, do be a do-er”.

Well, certainly there is an argument for this being Michael Bay’s most character-centric project. He’s always played with types, not genuine characters. Yet here he has definitely painted us a series of reasonably interesting portraits; made considerably easier by the fact that there was a source book and real-life individuals from which to flesh out these players. Unfortunately, it’s all for nought, mainly because none of these characters are particularly likeable.

Sure, the movie doesn’t start off that way – and there’s been plenty of controversy surrounding the fact that it portrays generally nasty individuals as lovable dolts, who bear more resemblance to a bumbling Looney Tunes antagonist like Wile E. Coyote, than the amoral criminals that they really are – but, whatever initial false sympathies you might find with these wannabe anti-heroes are soon dashed on the rocks as you realise the full extent of their madness.

Bay’s biggest mistake, of course, was attempting to tell their story in the first place. The fact that this real-life incident – which he read about in the Miami New Times – is fantastic enough to make it sound like a Hollywood movie, doesn’t mean that it should be made into one. And it’s a great shame – a great tragedy – as all it showcases is a waste of talent; Bay’s included. The man’s name may now have become synonymous with the clunky, thunderous attack-of-the-senses that is the Transformers trilogy, but he made his name as a furiously stylish director long before the first of those movies (or even his earlier disaster Blockbusters Armageddon and Pearl Harbour) opened him up to criticism. His music video roots had evolved into a tremendously satisfying energy evident in everything from Bad Boys to The Rock. These were action films of the highest order; sheer entertainment.

And the guy can direct. It may be stylish, and often vapid, but he has an eye for wild shots that showcase undeniable skill – remember the 360 degree panning stand-off in Bad Boys, with the camera spinning through bullet-holes and through doorways to revolve around the action? Well, Bay does exactly the same trick here, only the material simply is not worthy. Which is saying something.

Similarly his cast are all wasted. Mark Wahlberg is on ferocious form as the fast-talking bodybuilder determined to steal, Scarface-style, his piece of the American dream. At whatever cost. Fully embracing the role, Wahlberg is more than just a super-steroid-physique, getting lost in a character who, himself, was so lost to his own delusional ambitions. He brings a passion to every role he takes – even making the most of his lightweight double-teaming with the great Denzel Washington for another movie this very month, the fluffy but fun 2 Guns – but it’s for nothing in Pain & Gain. All he can hope for is that critics look back on him as capably portraying a mad, murdering bodybuilder.

Anthony Mackie takes a backseat to the more two dominant of the three bodybuilders, Tony Shalhoub makes for a suitably weasel-like target for them, and Ken Jeong tries his hand at being a self-help guru, but still struggles to jettison his standard comedy shtick (ditto for Rebel Wilson) and now three-time Bay collaborator Peter Stormare pops up for a miniscule cameo. Ed Harris is the best of the peripheral players, as the retired P.I. who looks into the whole sorry mess, but he doesn’t have a whole lot to play with.

Of the leads, however, it’s Dwayne Johnson who is perhaps the biggest surprise. It’s some strange irony that he would finally get to show his acting chops playing a character who is essentially a dumb muscle-bound ex-con with a short temper, but he really picks up and runs with the part, embracing the born-again strands, the drug and alcohol issues, and the in-over-his-head thought-processing. It’s perhaps the first time I’ve seen him play an actual character – rather than a type – and make it work.

You’ve gotta feel sorry for basically everybody involved in this mess, as it’s a stylish, fast-paced, well-scored, excellently-filmed drama which simply isn’t worth your time. Speaking of time, it’s also about forty minutes too long, clocking in at well over two hours when Bay – under control – could have easily made a far more interesting 90 minute flick. I guess he must have realised that the first half of the movie painted an amusing portrayal of the criminal gang, making them bumbling idiots rather than the vicious animals that their victims would have probably labelled them as, and decided that it would be good to spend a further hour setting the record straight.

Unfortunately things just get increasingly nasty after the halfway mark, playing at odds with the comedically-slanted first half, and just leaving a terrible, bitter taste in your mouth when the movie’s over. And there’s only so far you’re going to go to sympathise with Bay for having his talents wasted when – at the same time – he still flaunts his usual ‘talents’ for objectifying women, boiling them down to pure oiled T&A duty. I’m sure Bay thought it would be some kind of ‘sharp’ humour to poke fun at rape and homosexuality – to have guys line up to mock-rape one of the characters because they fancy her; to beat up the gay priest – but it feels less like biting wit and more like brute ignorance. When you spend so much time focussing on the rears of bikini-clad models pushing themselves slowly out of swimming pools, it’s kind-of hard to argue irony in your rape jokes.

I don’t know what we need from Michael Bay & Co. but it’s not this. He can talk about this being his Miami Goodfellas all he wants; verbally reference Scarface throughout, but you’re not rooting for bad guys here – you want these guys to burn. I think he missed the whole point of all the gangster classics that he was hoping to put his own spin on. Perhaps Bad Boys 3 is a way off; perhaps we’re going to have to put up with Bay / Wahlberg Transformers for a couple of outings; but it would be nice to see him return to his roots again for something a little smaller scale. With humour, likeable characters and his inimitable style. Pain & Gain could have been it, but got lost in a darkly humorous and, ultimately, horrific tragedy of a true tale; one which Bay was inept at getting to the heart of. Playing it funny. Playing it bloody. Playing it thrilling. Playing it dramatic. Bay had no idea what he was doing when he took on this project and all it proves is that he should really stick to reading the funny papers. A waste of all the talent involved.
Pain & Gain could have been a nice little filler movie, made for a relatively small budget, between Transformers blockbusters, reminding audiences – and director Michael Bay himself – that he was capable of more than just dumb cacophonies of CG action. His cast were capable and likeable. He was on great form with respect to his distinctive directorial style. And, initially, he struck a nicely witty tone with potentially engaging characters. Unfortunately, in basing his film on a very colourful true story, he’s been saddled with having to adhere to the real events and – ultimately – reveal his potential lovable-idiot anti-heroes to be the unquestionably amoral, frankly disgusting scum-of-the-earth murderers that they actually were. An unpleasant ride, even the admirable performances – from the strangest of places, like Dwayne Johnson – don’t justify taking the time to watch this piece.

Released at the same time on Region Free US Blu-ray as it is in the UK cinemas, initially I regretted ordering the title too late to avoid further expense on a cinema trip. Now I regret the fact that I will soon own this film. If you’re really interested, I’d wait until it’s available for a rental. You’re not missing much; you have nothing to gain.