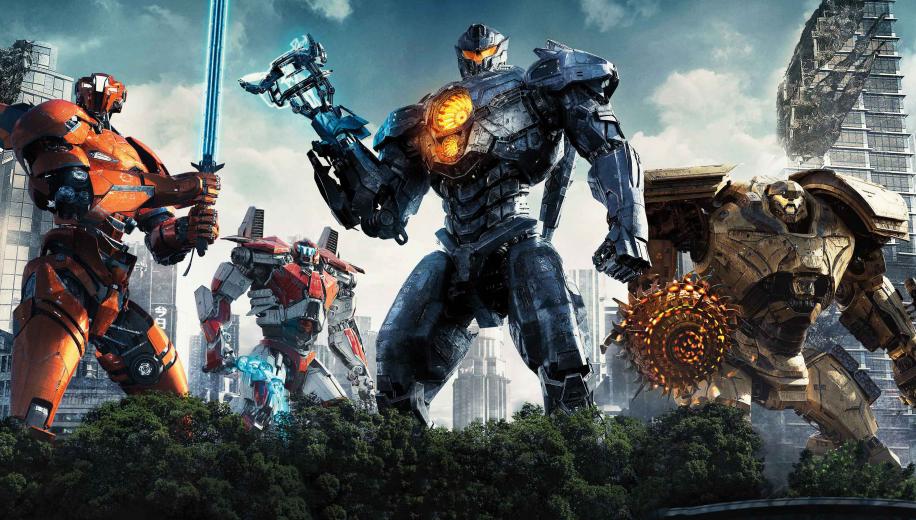 Pacific Rim was an usual blockbuster, with the scale and impact of a Transformers movie, but the vacuous void at the core of every one of Bay's sound and fury sequels filled - to some extent - by more thoughtful visionary director Guillermo del Toro's sensibilities.

It was a not insignificant Box Office success, but - more importantly - it was actually quite good, certainly for its ilk, providing Mecha vs. Monster mayhem on a grand scale, with visceral impact and some at least notional human drama beneath. Disappointingly del Toro doesn't return here for the sequel, which has a much greater influence from Bay than fans would have ideally liked, aiming for grand scale action, but not a great deal else.


Aiming for grand scale action but not a great deal else

Taking more of an influence from the great Neon Genesis Evangelion franchise - no bad thing - this time around, the story picks up a decade after the events of the first movie, with the now-peaceful land rebuilding after the devastation of the preceding Kaiju assaults, but facing an all-new threat in the dual issues of a new remote-controlled Jaeger robot drone program (which is just begging to go wrong) and the appearance of a seemingly gone-rogue super-Jaeger. Could the two be linked?

Uprising could have done with del Toro's returning to duty, and benefited from a stronger set of characters: Star Wars' John Boyega spends too long honing his best Idris Elba impersonation as the rebellious wayward son of Elba's character from the first movie, and Scott Eastwood (Fast & Furious 8) enjoys his least offensive vacuous role so far, but continues to frustrate with his thin looks-only shadow of his great father. The catering for Chinese markets also gets a little out of hand, with empty roles given to Chinese actors who are expected to carry key sequences but never given the opportunity to play characters. Indeed the only surprise is Cailee Spaeny's spunky teen recruit, Amara.

Whilst the first movie pushed the boundaries of darker themes within its PG-13 core, Uprising retreats well within them and indeed Spaeny's teen contingent could have easily been a Transformers player instead (although the shots of her would need to be more uncomfortably heavily sexualised), replete with pet robot Jaeger which actually transforms, but thankfully this isn't a Bay movie, so the parallels soon deviate.

Indeed ultimately Uprising surprises slightly in its narrative turns, affording the unassuming viewer some nice little twists which carry the direction of the action - allowing for not only a little Mecha on Monster action like last time out, but also some Mecha on Mecha combat, which was never tackled in the first film.

And, for all the problems with taking a leaf out of Michael Bay's playbook, one huge benefit is that the grand setpieces are almost always set in broad daylight, where you can finally revel in the immense scale of the action without scratching your head as to what exactly is going on. Hell, even the casting of Boyega, once you get past his forced Elba-ism, and Spaeny, once you get past the lightweight introduction, prove decent choices.

However this is very much a silver lining on a dark cloud, with the cost of these Bayisms mostly involving lightweight, inconsequential action with none of the darker undertones from the first movie and not even the slightest feeling that any character was in any real jeopardy (or that you'd care).

It clearly would have been a lot better with del Toro attached, although, for a directorial debut, Steven S. Knight's acquits himself admirably in what must have been a challenging project to tackle first time out of the gate. Uprising is actually a reasonably well put together sequel that just played it too light and Michael Bay-like for its own good; bring back del Toro for a second sequel and maybe you'd bring the fans back too.

Whilst Pacific Rim: Uprising was shot digitally at higher resolutions, it's one been afforded a 2K VFX pipeline and Digital Intermediate, leaving it with a semi-skimmed upscaled 4K image which has been used here for this Ultra HD Blu-ray release.


It may be an upscale, but it looks reference

The film definitely has more of a Transformers style than Del Toro's original, not least in its visuals, but the biggest benefit to this is that there's none that bathed-in-darkness-and-rain that dominated the first film which, whilst not beneficial to the lighter tone of the movie, definitely makes it easier to appraise in terms of visual opulence.

Detail is superior, and whilst visually the style runs hot, softness is seldom an issue, with fine textures absorbed and the nuances of both the large scale mechs and monsters, and the small scale minutiae afforded keen observation which belies the seemingly restrictive 2K limitations.

It's really the HDR, WCG and Dolby Vision that make all the difference, however, with even the opening Universal banner and ensuing Studio credits having imaginative stylisation that lends itself particularly well towards the theme of enjoying vividly colourful future tech in all its radiant glory, something furthered by all the HUDs and holographic readouts, and even the damn exit signs.

It's blindingly good, affording the darker sequences rich depth and shadow detail, whilst shafts of light - more often the kind of excessive lens flare that would make Michael Bay want to high five J.J. Abrams - beam across the screen in yellows, greens and blues. On a technical front, it may be limited by a semi-skimmed upscale, but that's not what it looks like: it looks like reference excellence.

On the aural front, Pacific Rim: Uprising is afforded a striking audio track in the form of 3D HD immersive audio courtesy of Dolby Atmos. Marrying up to the stunning visuals, it provides something of an exquisite audiovisual experience, replete with heady bombast and excellent immersion; the Atmos enhancement sitting atop an already reference Dolby TrueHD 7.1 core which provides more than enough heavyweight presence for those without object-based sound options.

Dialogue is rendered with clarity and coherence throughout, afforded priority across the fronts and centre channels where necessary, whilst the generic but still effective score offers some added tension-heightening threat, and rousing tones where necessary.

It's all about the effects really, however, which are offered up with discrete dissemination and, at times, astounding precision. Of course the more thunderous action setpieces, particularly as the film crescendos to its conclusion, afford heavyweight bombast complete with LFE underpinning, decimating cities, mechs and monsters alike with pure sound and fury. It's demo and reference through and through.

On the extras front there's a pleasant surprise in the fact that not only is the release afforded a strong selection of supplemental features, but they are - in a relatively rare exception - actually ported over to the 4K Ultra HD Blu-ray disc proper rather than just relegated to the accompanying Blu-ray disc as has always been the norm.

The extras are headlined by an Audio Commentary from director Steven S. Knight, who talks about the building of the sequel's story, the setting and production design, characters and performances.

The majority of the rest of the extras are Featurette-based, with around 10 bite-size mini-Featurettes split into Hall of Heroes, looking at the Jaegers; Bridge to Uprising, looking at the continuation from the first film; The Underworld of Uprising, focusing on the characters; Becoming Cadets, introducing the younger cast; Unexpected Villain (speaks for itself); Next Level Jaegers looking at the advanced mechs; I Am Scrapper looking behind the most Transformers-like of the creations; Going Mega focusing on the Kaiju; Secrets of Shao, offering background into the character; and Mako Returns on the returning character from the last film. The disc is rounded off by 7 minutes of Deleted Scenes with optional Director's Commentary.

It would have been a lot better with del Toro attached

Pacific Rim: Uprising is a modestly effective sequel, boasting plenty of grand scale action but not a lot else. For good and bad it enjoys a closer attachment to the Transformers movies than the del Toro film which it was spawned from. On the plus side, this means that the 4K Blu-ray release looks and sounds amazing, almost matching up to its predecessor, which was something of a benchmark for upscaled 4K discs on release. If you enjoyed the first film, with lowered expectations, you'll likely still get some entertainment value out of the second.