In order to fight monsters, we created monsters of our own. 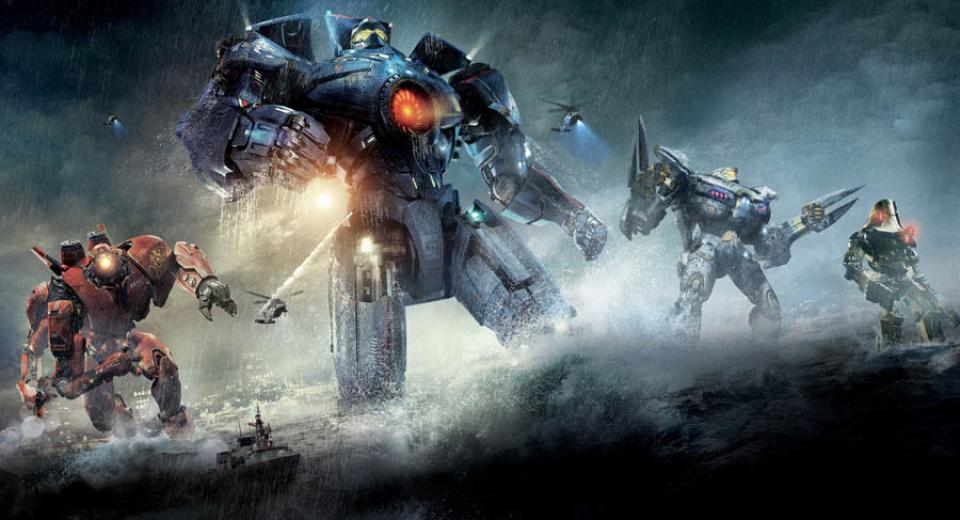 "We always thought alien life would come from the stars, but it came from deep beneath the sea. A portal between dimensions in the Pacific Ocean."

Gleefully stealing from every Japanese mecha robot vs. alien anime ever created - most notably the seminal Neon Genesis Evangelion - acclaimed director Guillermo Del Toro's mega-budget Summer blockbuster Pacific Rim is far more than just the Transformers vs. Godzilla mutation that fans were worried it would turn out to be. Unlike its lesser counterparts, Del Toro's beast blends genuine consequence into the mix, putting human lives at the heart of his skyscraper-sized creations and pitting them against increasingly dangerous monsters that are remarkably hard to kill. Spectacular and satisfying in equal measure, Pacific Rim might not quite tower over this year's other Summer super-sized blockbuster fares, but it still has the edge over them.

Throwing us right in the deep end, Pacific Rim fast-tracks us through the early stages of a war that erupts between human forces and alien monsters - Kaiju - that arrive through a portal which appears in the middle of the Pacific Ocean. After the first monsters took their toll on the cities attacked, the world united to create an effective defence – the Jaegers. Giant robots controlled by two human pilots whose minds are synched not only with the robot, but also with one another. The two must work as a team to control the Jaegers. Initially, they prove to be tough enough to take on the creatures, but as the years pass, the Kaiju adapt and grow stronger. Soon, even the Jaegers won't be enough.

“The first Kaiju made land in San Francisco, the second attacked Manilla, then the third hit Cabo. Then we learned... this was not going to stop.”

Pacific Rim thunders out of the gate with a stunning extended opening sequence that sets up the premise for the story. Two brothers – compatible due to the ‘drift’ connection with each other and, thus, with the Jaeger – are lowered down in what seems like a huge lift. You soon realise that they are strapped into pilot seats within the massive solid metal head of the actual Jaeger robot. It lands on the body and grinds into place. The steel beast whirrs and groans and roars to life, rolled out slowly on giant tracks before being deployed directly into the Ocean. Its nickname? Gypsy Danger.

It steps from the shore and crashes through the waves, heading towards a small fishing boat which is sitting in the path of an equally imposing creature – a class 3 Kaiju. Nicknamed Knifehead because of its protruding head – which looks like that of a Goblin shark – the Kaiju is the biggest ever encountered, but Gypsy Danger thunders at it, driven on furiously by the determined brothers piloting it. They grab and secure the boat, spinning out of the reach of the angry attacking Kaiju, before charging up their plasma fist ready to launch a blast right into the heart of the monster. Waves crash, metal grinds, the beast roars, and the night erupts with thunder and lightning.

“In order to fight monsters, we created monsters of our own.”

Whilst director Guillermo Del Toro asserts that Pacific Rim was born out of a daydream he had whilst staring out at the ocean – imagining a giant robot fighting a giant monster out in the mist – I doubt that even he would be able to deny the inspiration born from Japanese anime which have some very similar themes (if he did, it would be almost as silly as when the woman who wrote The Hunger Games – Suzanne Collins – denied knowing anything about Battle Royale). If you’ve never heard of Neon Genesis Evangelion, then you really should rectify that. The recent Evangelion ‘remake’ – a CG anime of outstanding scale and quality – is pretty-much the benchmark in terms of monster vs. mecha action. Its narrative also involves strange alien monsters which attack the Earth, one by one – each one bigger and more powerful than the last – and military forces who desperately construct giant robots to take them down – each one piloted by a human who has to fuse their mind with the robot in order to pilot it, and therefore feels pain when it gets damaged. With each landing, cities are levelled, and monsters, mechas – or even sometimes both – are torn apart in the battle.

To deny the similarities would be akin to suggesting that Fincher’s remake of The Girl with a Dragon Tattoo was an original film. Thankfully, however, Pacific Rim finds originality in other places – it is, after all, the first live action movie to attempt this kind of scale of mayhem. What’s that? “Transformers”, I hear you mutter under your breath. Well forget Transformers. As much as I was filled with joy when I first heard that distinctive ‘Transformers transform’ sound and saw Optimus Prime come to life for the first time, the two mind-numbing sequels have drained away much of that initial pleasure and it’s Del Toro that finally sets the record straight – it’s not just about giant robots thumping each other through buildings (or superheroes, for that matter, as Man of Steel foolishly digressed into), but also actually about impact... and consequence.

“We needed a new weapon. The Jaeger program was born. Two pilots: our minds; our memories connected. Man and machine became one.”

Putting humans at the very heart of the metal beasts is integral to drawing the audience into the action. Seeing a giant robot lose an arm to a giant monster may be spectacular, but it means nothing without the added edge of having the human pilot suffering pain as a direct result. Similarly, seeing a robot crushed, and torn apart, and submerged under water means little until you realise that the human pilots within are going to drown with it.

Providing the human element we get relative newcomer Charlie Hunnam (Sons of Anarchy) making a Big Screen name for himself as one of the best Jaeger pilots around, unfortunately hampered by the weight of a past tragedy. He’s actually pretty good in the part, blending the charm and arrogance of Cruise’s Top Gun Maverick with the brute force and, erm, arrogance of Chris Hemsworth’s Thor. Babel’s Rinko Kikuchi plays another potential pilot, who is also full of grief and haunted by horrific memories from the early Kaiju attacks, and who therefore finds a connection with Hunnam’s brash lead pilot. Del Toro does a nice job at painting their backstories, and adopts a fairly original approach in this regard – using their mind-melding ‘connection’ to allow insight into what has happened to them.

The same goes for Idris Elba who, from the trailers, looked like he might have only got a silly cheesy drill instructor part with a dodgy accent. After Del Toro toyed with the idea of putting Cruise in the part (following their failed attempt to get H.P. Lovecraft’s At the Mountains of Madness off the ground), Elba was picked to play Marshall Stacker Pentecost (!!) due to his work on the excellent Brit TV series Luther and, whilst his role here isn’t anywhere near as substantial as that – let alone as powerful as his contribution to The Wire – he still does a good job; his research involving Obama speeches and channelling Russell Crowe’s Gladiator and Gibson’s Braveheart climaxing in that rousing soundbite (which should have been saved for the movie rather than rinsed on the trailers) but Del Toro’s interest in a slightly more worthy backstory having a far more satisfying effect.

“Today, at the edge of our hope, at the end of our time, we have chosen to believe in each other. Today, we face the monsters that are at our door. Today, we are cancelling the apocalypse!”

Of course a Del Toro movie would never be the same without a bunch of oddball characters – normally scientists – as well as a larger-than-life part for Del Toro regular Ron Perlman (Blade II, Hellboy). Thankfully Del Toro reins-in any overt Jar-Jar Bink-isms, and instead manages to just about land his humour and quirkiness on the right side, without drifting into audience irritation territory.

Where he excels, however, is in the action. Whilst some fans might have actually expected more – and I, for one, would have loved to have seen more from the first five years of the ‘War’ (although I understand why they had to skip to the end) – the action sequences are as big, bold and spectacular as you could have possibly hoped for. It’s not wall-to-wall – there’s a solid opening salvo; and then a trio of latter-end confrontations that get increasingly chaotic – but it is stunning.

And Del Toro might have done a surprising about-turn when it comes to 3D-ifying his feature, but, don’t forget, however much you might question the quality of the ‘converted’ 2D live-action sequences, the CG battles were entirely crafted in native 3D. And they look pretty amazing. The best 3D action I've seen in a while.

The mecha Jaegers have each been specifically tailored to reflect the country of origin – the Russian Cherno Alpha looks like a walking nuclear power plant; the Chinese Crimson Typhoon is a three-armed-warrior style robot; and the distinctive American Gypsy Danger was given an Art Deco style, complete with the swagger and gait of John Wayne. The Kaijus were also given distinctive looks – sharks, crustaceans, dragons – whilst also paying a passing nod to the Godzilla monsters of old in that they each have the basic silhouette of the classic ‘man-in-a-suit’. These are some of the most effective building-sized CG creations ever featured in a movie, and the toe-to-toe skirmishes are increasingly potent, with metal-grinding, ground-pounding, hull-tearing impact to them.

Blending themes and ideas you might find familiar from everything from Firefox to Top Gun; from Independence Day to Jurassic Park; from Reel Steel to Avatar, Pacific Rim blasts past its Transformers-meets-Godzilla labelling and resounds as the closest thing we’ll likely ever get to a live action Evangelion movie, which, in case you didn’t know, is a hell of a compliment. It provides action with impact; confrontation with consequence; spectacle with significance – it may not be a particularly weighty affair and, no doubt, there will be plenty of hardcore Del Toro fans who somehow expected far more than this from him but, with respect, I think that they are missing the point. This is the best giant robots vs. giant monsters summer blockbuster feature that anybody could have ever had any right to hope for. And I, for one, can’t wait for the next one. Well worth seeing on the biggest (3D IMAX) screen you can find, it comes recommended.

Go big or go extinct indeed.
Gleefully stealing from every Japanese mecha robot vs. alien anime ever created – most notably the seminal Neon Genesis Evangelion – acclaimed director Guillermo Del Toro’s mega-budget Summer blockbuster Pacific Rim is far more than just the Transformers vs. Godzilla mutation that fans were worried it would turn out to be.

Unlike its lesser counterparts, Del Toro’s beast blends genuine consequence into the mix, putting human lives at the heart of his skyscraper-sized creations and pitting them against increasingly dangerous monsters that are remarkably hard to kill.
Spectacular and satisfying in equal measure, Pacific Rim might not quite tower over this year’s other Summer super-sized blockbuster fares, but it still has the edge over them, and it resounds as one of the best 3D IMAX features of the year – don’t let the conversion talk fool you, the all-important action sequences were all native 3D, and look superb. See it now.