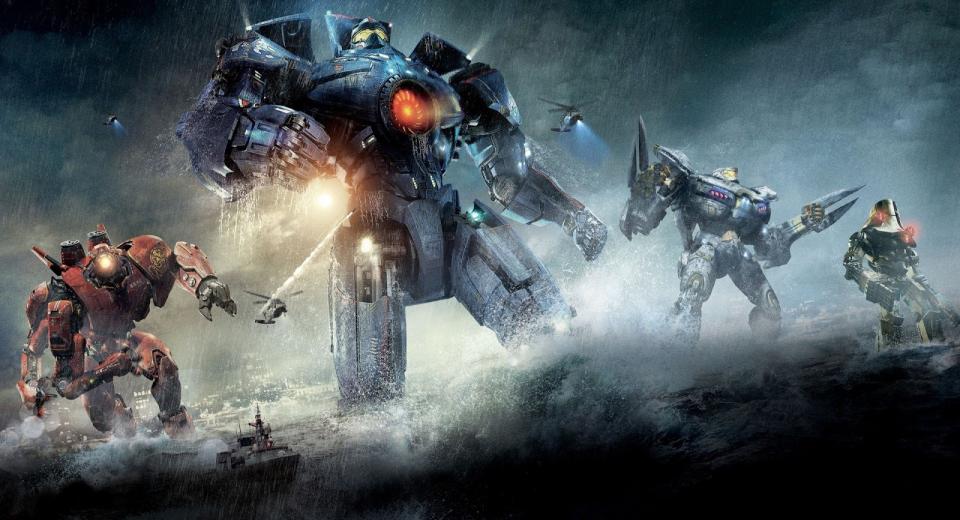 Gleefully stealing from every Japanese mecha robot vs. alien anime ever created – most notably the seminal Neon Genesis Evangelion – acclaimed director Guillermo Del Toro’s mega-budget Summer blockbuster Pacific Rim is far more than just the Transformers vs. Godzilla mutation that fans were worried it would turn out to be. Unlike its lesser counterparts, Del Toro’s beast blends genuine consequence into the mix, putting human lives at the heart of his skyscraper-sized creations and pitting them against increasingly dangerous monsters that are remarkably hard to kill. Spectacular and satisfying in equal measure, Pacific Rim might not quite tower over 2013's other big hitters, but it still has the edge over them.
Blending themes and ideas you might find familiar from everything from Firefox to Top Gun; from Independence Day to Jurassic Park; from Reel Steel to Avatar, Pacific Rim blasts past its Transformers-meets-Godzilla labelling and resounds as the closest thing we’ll likely ever get to a live action Evangelion movie, which, in case you didn’t know, is a hell of a compliment. It provides action with impact; confrontation with consequence; spectacle with significance – it may not be a particularly weighty affair and, no doubt, there will be plenty of hardcore Del Toro fans who somehow expect far more than this from him but, with respect, I think that they are missing the point. This is the best giant robots vs. giant monsters summer blockbuster feature that anybody could have ever had any right to hope for. And I, for one, can’t wait for the next one. Let’s get this clear from the start. There are only a handful of 3D titles that actually look better watched in 3D than in 2D. Avatar set the standard pretty early on, and, more recently, Dredd proved innovatively effective using the format. Another thing was established early on – native 3D trumped converted 3D across the board, and, indeed, there were very few instances where converted 3D was even in the least bit effective. That, however, has changed. Whilst Director Guillermo Del Toro originally stated unreservedly that he would not be shooting his mecha vs. monsters epic, Pacific Rim, in 3D, he soon made an about-turn for what, initially appeared to be purely commercial reasons. It then turned out that he’d spent over twice as much time on the conversion than the norm, tweaking every last aspect of it to craft the best 3D he could.


The result? Not only the best 3D conversion ever, but one of the best 3D movies made, up there with Avatar, Dredd and, just recently, Gravity.

Boasting at-times staggering depth, substantial dimensionality and plenty of welcome texturing, the 1080p/MVC-encoded presentation, framed in the movie’s original theatrical aspect ratio of 1.85:1 widescreen, looks considerably superior in 3D. Its AVC-encoded 2D counterpart may well be near-flawless, but the added dimension brings the wartorn, battle-ravaged cityscapes to life, gives height and presence to the towering mechas, and gives depth and punch to the thundering monsters. Indeed, despite the inherent problems coming from a feature where the majority of the action sequences are set at night – and in the rain – the remarkably natural-looking 3D still steps up to the plate, bringing waves crashing down, along with bridges, buildings and just about everything else you can think of. With very little about it that can be criticised, this is just about as close as you’re going to get to a flawless 3D (and 2D) experience.

The director himself would prefer that you watch this film in 3D, so who are we to disagree? Oh, the dilemma. So, the US Blu-ray release of Pacific Rim sports thunderous DTS-HD Master Audio tracks in both 5.1 and 7.1 options. The UK release? Well, it appears to have forgone the 7.1 variation (perhaps in favour of having more alternative language options instead?). But does this mean that we should all rush out and import the US release instead? Perhaps, if all things were equal. But they aren’t, and the price of the US package is arguably prohibitive over simply purchasing the UK variant. And the reality is that the 5.1 track is fantastic, so much so that you’d be hard pushed to imagine how it could possibly be beaten.


The spectacular video and stunning audio – even in its 5.1 flavour – easily earn this disc a high spot in this year’s Top 10 Blu-ray releases.

Dialogue is given keen prioritisation across the fronts and centre channels, never succumbing to the weight of the surrounding elements, but for where the furore is intentionally overwhelming. And overwhelm it does indeed, spilling out into your living room at every opportunity, smashing through your walls and reverberating across your floorboards. Utterly engulfing, relentlessly engaging, and blisteringly atmospheric, every single mecha/monster sequence ignites the soundstage and, even in the interim, there are plenty of noisy flourishes to remind us that we’re in the middle of a war. I haven’t heard many – if any – better tracks this year. At least the extras match up, with the UK Region Free release of Pacific Rim boasting another enthralling Audio Commentary from Director Guillermo del Toro; over an hour of Focus Point mini-Featurettes – A Film by Guillermo del Toro, A Primer on Kaijus & Jaegers, Intricacy of Robot Design, Honouring the Kaiju Tradition, The Importance of Mass and Scale, Shatterdome Ranger Roll Call, Jaegers Echo Human Grace, Inside the Drift, Goth-Tech, Mega Sized Sets, Baby Kaiju Set Visit, Tokyo Alley Set Visit, and Orchestral Sounds from the Anteverse; an Interactive Director’s Notebook with a further half a dozen video Featurettes; a quarter-hour look at the Digital Artistry of Pacific Rim; a gallery of art design entitled The Shatterdome; a brief 5-minute expansion on the Drift sequences in Drift Space; a clutch of four Deleted Scenes; and a 4-minute Blooper Reel.


What? They didn't include the kitchen sink?

Fans of Guillermo del Toro will be thoroughly unsurprised by the wealth of material included on this release – and some may even be disappointed that it doesn’t quite match up to some of his earlier packages – but this is still a fantastic selection of extras, often crafted with the same passion and affection with which he fashioned the movie, thus making them a true pleasure to investigate. Enjoy!

This is the best giant robots vs. giant monsters summer blockbuster feature that anybody could have ever had any right to hope for. Whatever its faults, it more than makes up for them with punch, presence and sheer impact.

Although post-converted, it also stands out as one of the best 3D movies ever released, and hits Blu-ray with the same impressive effect, boasting stunning visuals and spectacular audio, as well as a hefty plethora of extra features. Don't be too bothered about the loss of the US equivalent's additional 7.1 track, the UK counterpart will likely satisfy all but the most pernickety audiophiles out there. Whatever decision you make, make sure it involves putting his beast in your shopping basket.