P.S. I Love You Movie Review 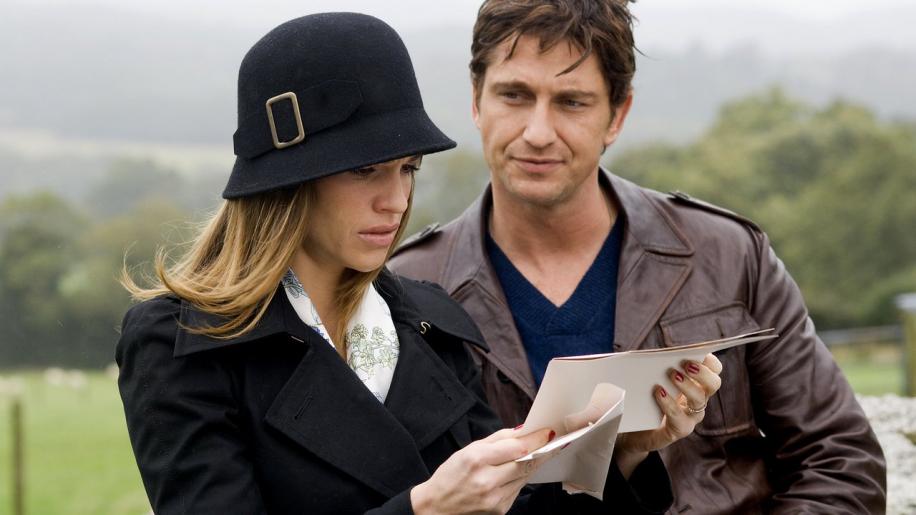 One of the most deepest and enduring longings in life is the search for true love. Love, friendship and happiness are emotions that break down virtually all barriers across all walks of life. They are the emotions that make all people, irrespective of age, colour or creed feel entirely human. Little wonder why some people spend a lifetime (or a considerable proportion of it) searching for the perfect relationship and for a soul partner. That is of course if you believe a perfect relationship can or actually does exist. It's therefore interesting to come across a film that claims to be a romantic comedy but actually deviates slightly away from the norm. P.S. I love you was the debut novel from Cecilia Ahern and it's certainly a departure from your straightforward romantic chick flick. The story deals not with a relationship but one that was and is now no more.

Gerard Butler of recent '300' fame drops his swords, armoury and the whole machismo thing altogether in order to play a far softer image on screen. He plays Gerry Kennedy, a lovable Irish hunk of a man married to Holly Kennedy (Hilary Swank). The film starts with the couple in a middle of a moody argument whilst heading home to their Brooklyn apartment. The argument revolves around some misguided comments from Gerry about Holly not wanting to have having children in front of her mother. Anyhow, it's a bit of touchy affair between the couple and he's trying his best to win her back over and to forgive him. You know, it's the sort of thing that all guys have to do from time to time; grovel.

Not exactly the bubbly effervescent opening you would be expecting from what is meant to be a comedy of a film ? In actual fact the intro takes a full 12 minutes before the opening credits start to roll. As you can gather from the opening, the film actually has a degree of sobriety leading into it.

The scenes that immediately follow are that of Holly along with her mother played by Kathy Bates and her circle of close friends (including Gina Gershon, James Marsters, and Lisa Kudrow) in a bar. There's a priest and an urn and you soon realise that this is a wake. Gerry, at the age of 35, had unexpectedly died from a brain tumour and in turn has suddenly left Holly as a 30-year old widow. She is left sat in the bar, looking shell shocked clutching at his ashes. I must admit at this point I felt as bemused as Holly Kennedy looked on screen. How on earth was this movie going to turn into a funny comedy? I think the point to make clear here is that the film is not standout comedy per se. It is best to curb your expectations of the humour on offer as to being of the 'cute & romantic' variety.

Along with the joys of life, we all as human beings also have to bear the despair and losses of death. The loss of close family or loved ones causes much heartache and much despair. When you suddenly lose the love of your life in what is your soul mate and companion then the void left from within can be inconsolable. It's a grief that for many never truly heals and it can take a lifetime to get over or come to terms with. However, as we all know life does indeed move on and if you're still alive then you have to try to move on with the life around you. So, the story of Holly Kennedy in P.S. I love you becomes clear. It is about how she handles the death of Gerry, how she has to come to terms with being a widow and how she has to learn to accept to move on.

Now all of this is not exactly prime comedy material or a story that could remotely lend to it. Holly goes through an immense grieving process, suffers depression and loneliness and it is left to her mother and friends to rally around and lift her out of the doldrums. It's actually quite a heavy first half of a movie and it's quite dark, especially watching her trying to deal with her emotions. However, the crux of the movie is not all about this. The crux actually revolves around a series of letters that Gerry has written to Holly before he died.

Being aware of his medical condition before his death, Gerry had written letters that were to be sent to Holly in monthly intervals for a year after his death. The 'cute' comedy as it were revolves around the delivery of each letter and how it brings Gerry back to life in her mind. It's as if through the letters left to her that Gerry is providing hope and anticipation to Holly, guiding her through the grief of losing him. How thoughtful eh ? The whole thing as you may gather feels rather spooky, weird and quite unnatural. It's not what you would best describe as a healthy way to grieve. It's certainly not normal behaviour (whatever normal is) and it's all simply weird stuff as a result.

With the arrival of each letter it rekindles memories of their relationship. The 'ghost' of Gerry continually asks her to re-live moments such as when they first met and all the things that they had enjoyed during their courtship. She is told to go to a karaoke bar and let her hair down, she's then sent on a pre-paid trip to his native Ireland in order to re-live every moment once over. All of this is of course without him this time around. As you can imagine the structure of the movie is littered with flashbacks. Whilst initially this is understandable it quite quickly becomes incredibly irritating and annoying. The film as a direct result begins to lack continuity and soon becomes far too repetitive. The regular re-appearance of a 'ghost' Gerard Butler with a big grin on his face, preaching to her what she should be doing could be best described as quite condescending. In actual fact it's quite sickly.

Now the injection of mild humour is done in various doses and mainly through those around her. She has two suitors, Daniel (Harry Connick Jnr) who's a bartender and William (Jeffrey Dean Morgan) who she meets in Ireland. Unsurprisingly both men have great difficulty getting through to her or in achieving any emotional contact of note with Holly. Whilst she does try to engage with them, the blank gazed look on her face quite evidently shows that she is not ready for another relationship. Nevertheless both men continue to try in the hope that time will help heal her wounds and bring her back to normality. It's actually not until she discovers that one of her friends is pregnant and that the other is getting married that she realises that life has been moving on around her. It's only at this point she realises she needs to start to move on for herself.

The movie has very few twists or turns and the only coy development is that William was actually acquainted with Gerry in his youth. Both had grown up together in Ireland and were good friends. It's an unnecessary insertion into the storyline and if anything simply does more to stretch away the credibility of the film. Anyhow, Holly does take a fancy to him and the film culminates in her making her choice of which of the two guys she will eventually go with.


P.S. I love you is an inoffensive movie. At 127 minutes it's probably overlong by about 30-40 minutes. Add to that the slow moving nature of the film it feels like an entire age to get through. Whilst all the cast put in an adequate performance, nothing sparkles here I'm afraid. Gerard Butler is no romantic lead and I can't imagine he will be cast for many more roles like this. Hilary Swank on the other hand can and does portray her role fairly well, but it's not a consistent performance.

What the film really lacks is a chemistry between the two lead acting performances. There's a complete absence of an onscreen chemistry or convincing bonding between the two. This leads to another disappointing aspect of both the film and story. Never do you get the feeling that this was a 'perfect relationship'. The film after all begins with a row and in all the flashbacks there is also a fair degree of uncomfort and unease between the two. However, Holly's grief is overly portrayed as that of someone who has lost such a 'perfect relationship' and as I say the film does not portray this equally as effectively. As for being touted as a romantic comedy, the film misses it's mark by a long chalk. I suppose everyone grieves in different ways though I can safely say this is not one movie I would be grieving over for too long.