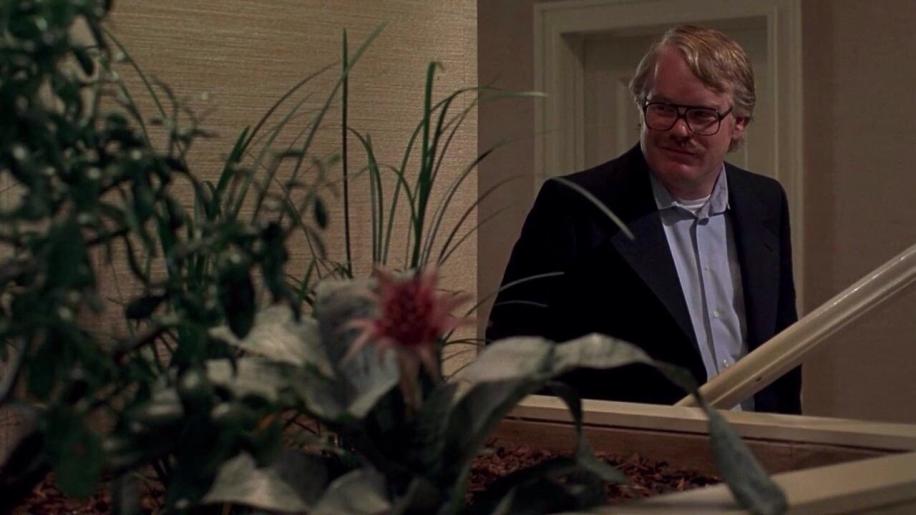 Reviewing DVD's is not always as great a job as you may think. Much of the stuff you see involves movies about which you have little affinity or interest. Every once in a while a great little film comes along that you did not catch at the cinema, because you felt it just “wasn't your cup of tea”, and by the time it arrives on DVD you certainly don't want to spend your money on a turkey, so it stays on the retailers shelves. Owning Mahowny is just such a movie.

Directed by Richard Kwietniowski, Owning Mahowny tells the true story of Dan Mahowny (Philip Seymour Hoffman), a non descript assistant bank manager in charge of corporate loans at a large Toronto bank. Dan leads a mundane life with his loving but equally bland fiancée Belinda (Minnie Driver). Problem is Dan has a habit, gambling. He has managed to keep his habit secret from all his friends and colleagues, but has run up a $40,000 debt at the horse track, and when his bookie starts to show up at the bank to collect the debt Dan realises he has to do something drastic to pay it off. Dan's solution? Embezzlement from the bank. Dan is such a loyal and hard working man that no one bats an eyelid when he makes larger and larger withdrawals against clients accounts in order to make frequent trips to the casinos of Atlantic City eventually losing over $10M.

Based to the book Stung: The Incredible Obsession of Brian Molony by Gary Ross, the film is an insightful and fascinating look at the nature of gambling and obsession. Philip Seymour Hoffman is outstanding in the role of the greasy, unkempt, tedious nobody who transforms into the gambling maniac in the seedy casino of Victor Foss, John Hurt in another fine display. Technically the movie is as unremarkable as Mahowny himself. After the entire story is a simple one, and it is therefore the telling that is all-important. A number of things conspire to ensure this is more than standard Sunday afternoon movie fodder. First of all is the inclusion of the peripheral characters. We are invited to see Dan through the eyes of his fiancée, his bookie and the casino manager, as well as getting Dan's point of view. This expansion of the story makes for interesting character studies. Fine acting by those portraying these roles certainly helps. Secondly director Kwietniowski manages to instil enough tension into the story to ensure sweaty palms in the viewer, and finally there is the incredible acting talent that is Hoffman. His performance draws sympathy, frustration, annoyance and affection from the audience. He is an actor, like Eugene Levy, who I could watch reading out the telephone book. Catch this movie even if it is just for his performance.