What do you get when you cross Inglorious Basterds with Universal Soldier? 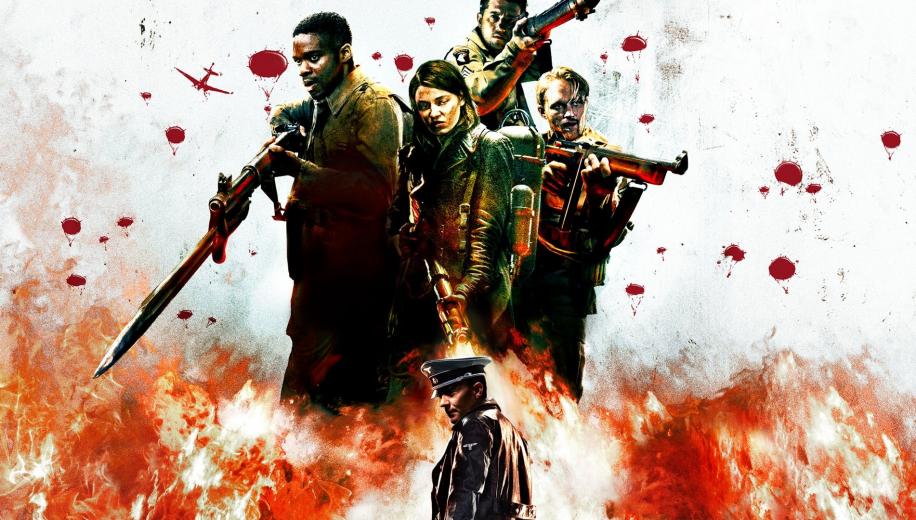 This J.J. Abrams-produced action horror gem is like a film adaptation of the videogame Wolfenstein; a grungy, gruesome and surprisingly engaging little B-movie period shoot-‘em-up.

A film like this has got no right to be this good, yet right from the outset the John Carpenter-esque opening beats and visceral parachute drop into enemy territory, Overlord maintains intensity and unpredictability. Playing out like the Dusk Til Dawn of WWII movies, it slow-burns the revelations, seeing a group of soldiers dropped into occupied France for a secret mission to destroy a communications tower, only to find that the tower sits atop an underground lab where the Nazis are conducting secret experiments on the local townsfolk.

What could have so easily been played out as a straight WWII actioner – albeit with a satisfying no-holds-barred approach to the violence – takes a sharp left turn into crazyville in a way not wholly unlike how Rodriguez’s ostensibly robbers-on-the-run road trip suddenly goes quite literally into hell. And somehow it works superbly, delivering scenes of face-ripping torture, spine-popping mutation and excellent old-school violence, played out against a gritty WWII backdrop.


This is B-movie action-horror gold, far exceeding any expectations you might have

It helps no end that the cast are largely unknown, but you can also see why these guys are going to likely go on to bigger and better things. Kurt Russell’s kid Wyatt (I kid you not) gets to show some teeth as the leader of the group, whilst a couple of his team are from Amazon’s Jack Ryan and the main antagonist is from Game of Thrones (although isn’t everybody?).

The benefit to having a little-known cast is that you can do what you like with them, adding a level of often shocking unpredictability to the whole already messy affair, whose Universal Soldier comparisons are meant in the best possible way – this is b-movie action-horror gold (with a hint of sci-fi fantasy thrown into the mix for good measure), far exceeding any expectations you might have. That is, unless you’re expecting the World War Z of WWII movies. Hopefully they’ll save that for a sequel.

Overlord comes to UK Ultra HD Blu-ray courtesy of Paramount, who offer up likely the exact same strong presentation that their US release was afforded, with no specific details about what is almost certainly a 2K Digital Intermediate, with nonetheless impressive video culled from the original 3.4K digital shoot.


Overlord often ends up looking more impressive than it should, even if it’s not quite consistent demo material

Overlord is a heavily saturated piece (to give it that period style) but this 4K presentation still enjoys a nominal, although largely unnoticed uptick in detail, only really apparent in shadow detail (thank you Dolby Vision) or some of the textures in the more striking tones – the fiery orange-yellow glow of the early explosions; the almost neon red tracer fire of the fixed machine guns – but this only further emphasises the fact that it’s not really a resolution upgrade you’re experiencing here, it’s WCG, HDR and Dolby Vision working their magic to bring the picture to life.

And those elements do set this apart considerably from its 1080p Blu-ray counterpart, rendering richer, more vibrant tones across the board, and taking every possible opportunity to offer you something that pops with intensity, whether from an explosion, a flamethrower, or just a burst of gunfire. Entrenched in darkness, Dolby Vision keeps any opportune moments for crush at bay, and despite the limited budget, Overlord often ends up looking more impressive than it should, even if it’s not quite consistent demo material.

Whilst the picture quality may not quite earn the piece a demo or reference score, the accompanying Dolby Atmos track is amidst the best this year, an exemplary use of the format, which pounds at you with an intense John Carpenter-esque thrum right from the outset (it makes a nice, if unusual, companion-piece to the new Halloween film) and soon detonates a dozen explosions in the intense airborne opening assault, allowing the LFE channel to absolutely drive the powerful track, and define every single action-based confrontation.


The track takes every opportunity it can to impress, and impress it does

Hell, even when jeeps pull up, they growl in with such intensity that you wonder whether they’ve pulled right into your living room, whilst sniper and heavy machine gun fire is keenly weighted differently, flamethrowers threaten to burst fiery death into your face, and explosions shake you underfoot. Certainly there’s no better use of the overhead channel than during that opening airborne salvo, but the track still takes every opportunity it can to impress, and impress it does.

The 4K disc itself sports no extras, but the accompanying Blu-ray has a hefty and comprehensive near hour-long six-part Making-of Documentary

Overlord is far better than it has any right to be. It may not really fool many with its rope-a-dope mid-film shift (even if you haven’t seen the trailer, the poster alone is likely enough of a giveaway – it would have been interesting to have had the same mind-blown experience that From Dusk Til Dawn elicited on a first watch) but it doesn’t really have to, providing visceral, bloody WWII action-horror with utter B-movie glee.


Overlord is far better than it has any right to be

Paramount’s UK 4K Ultra HD Blu-ray release affords the grungy flick very good Dolby Vision-enhanced video as well as downright excellent Dolby Atmos-enhanced audio, along with a hefty 6-part Making-of Documentary, albeit included only on the accompanying Blu-ray. Go into it expecting a medium-budget, but pleasantly stylish and surprisingly violent WWII B-movie actioner and maybe the horror twists and turns will only add to your enjoyment. Recommended.