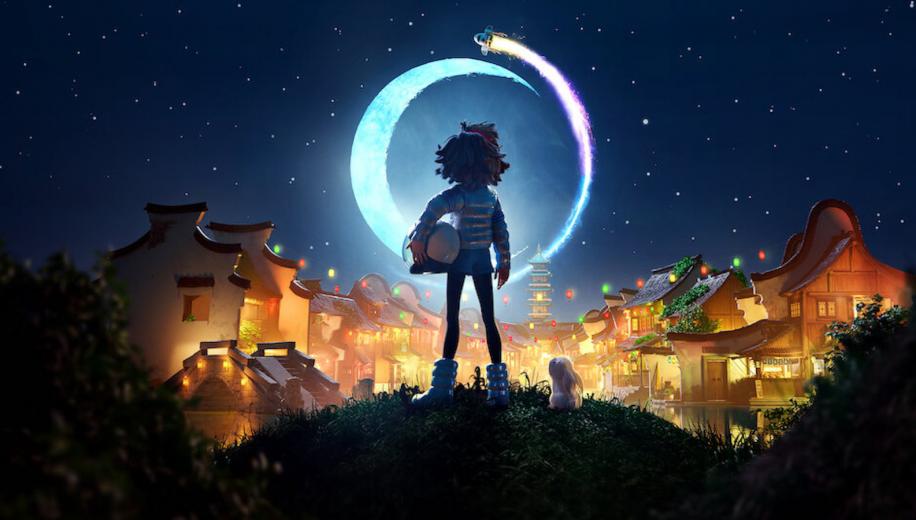 Pearl Studios, the Chinese production company behind Abominable, teams up with Netflix Animation for its second movie, a familiar-feeling but no less engaging romp into Chinese mythology, which has more than a little Tron: Legacy-lite at its core.

Dreamworks' Chinese cousin company, Pearl Studios, has clearly found its feet, leaving behind any co-production work with Dreamworks itself in favour of partnerships with Netflix (on the distribution front) and Sony (on the animation front), and commissioning an adaptation of the Chinese Myth about the Goddess of the Moon, Chang'e, to forge a gorgeous animated yarn that's probably only a couple of animated characters and a sprinkle of magic away from being lower tier Disney fare. Of course, many will argue that it's that dash of magic that defines Disney's (and Pixar's) output, and that's absolutely indisputable, however Over the Moon is a pretty damn good non-Disney animation nonetheless, clearly attempting to offer some colourful cultural enlightenment in much the same way that Disney/Pixar's own Coco did a few years' back.

Fei Fei is traumatised by irreparable loss which she simply can't overcome, finding herself caught up in the tale of the Goddess of the Moon, Chang'e, who was parted from her love to live her immortal life on the Moon; hoping to find inspiration in this mythical goddess - if only she can prove her existence, maybe she can show that it's worth waiting an eternity just to be reunited with your true love. And all she needs to do to prove Chang'e's existence is get to the Moon!

Once you get into luminescent discos, omnipowerful Gods who have been corrupted by time, tales of searching for lost parents, light cycles racing across an alien landscape, and a table-tennis match that looks surprisingly like Disc Wars, you might start to get that Tron: Legacy feeling, but that's really not a bad thing at all. It may well be Tron: Legacy-lite, but it's prepping younger kids for the amazing things to come when they're old enough to watch that, and there's more than a little fun to be had navigating this colourful new world.

Over the Moon doesn't go big on new ideas, sure, but it's got more than enough to contend with having to fashion a feature film out of a comparatively basic premise - the Chang'e tale is seemingly simplicity itself but, underneath all of the tried-and-tested motifs at play here (right down to Ken Jeong's Olaf-esque comedy relief side-kick), there's actually a surprisingly clever story-within-a-story going on, entrenching Chang'e's tale of loss in Fei Fei's own desperate loss, and mirroring the two Moon-destined journeys rather impressively.

Going for Disney on the song front - arguably much more than Abominable - Over the Moon hits the right notes with a couple of original song tracks, tugging at heartstrings early on, and then going full Ava Max-meets-K-pop (rather contagiously so, courtesy of Helen Park, with vocals by the talented Phillipa Soo from Hamilton) for its grandstanding "Ultraluminary". Killing Eve's Sandra Oh also stands out in the voice cast - apart from, of course, Jeong - but gets precious little time, but that's ok, as the film relies more on visuals and song, and childlike wonder, which is more than enough.

Despite the Dolby Vision and Atmos - the former absolutely glowing with vibrant intensity particularly in the Moon sequences - a few CG creature creations don't look all that impressive, with Jeong's lost puppy particularly bland, and most of The Goddess of the Moon's minions underwhelming in their visual realisation. Perhaps it's a stylistic choice, but things like this simply don't even come close to Disney in terms of perfected texturing, which is odd when you think that the feature is actually helmed by a Disney animator, making his feature directorial debut here. Still, as stated, it's a pretty damn good riff on a traditional Disney formula, and it casts a spotlight on a gorgeous Chinese Myth, adding some cultural flavour to your kid's meal to go along with the suitably emotional ride.